Paula Vogel’s play, The Mineola Twins, imagines that identical twins can grow up different in one way: one’s stance on social and political issues is liberal, and the other’s is conservative. The fact that they are different in one other way – the degree to which they have “boobs” – gives you an idea of how this survey of the women’s liberation movement from the mid-1950s through the 1980s unfolds. The unfolding is pretty hilarious, if I do say so myself. 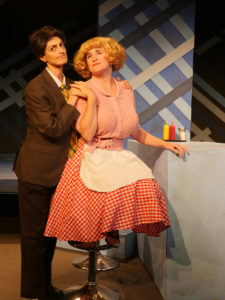 Officially, there is a subtitle: “A comedy in six scenes, four dreams and seven wigs.” And that’s not just a gag. As the years progress in the play, not only do the two twins evolve, but they have children who turn out to be their parent’s opposite.

The twins are named Myrna and Myra – and they’re both played by Samantha Ginn. In fact, all of the actors play multiple roles. By 1950s standards, Mryna is the “good” twin, and Myra is the “bad” one. Myrna is conventional, dresses well, and wants to be a housewife. Myra is sloppy, drinks and works as a waitress

Myrna becomes engaged to Jim (Emily Jerez), but dumps him because he has a one-night stand with Myra. Myrna eventually marries and has a son named Kenny (Phillip Magin). She’s also spent some time in a mental hospital. Myra has joined an anti-war group and has disguised herself as Myrna to rob a bank. She spends time running from the law. Myra later comes out as lesbian and has a son, Ben (Mr. Magin), with her lover, Sara (Desireé Clarke).

The play comes to a farcical conclusion when Myrna plots to blow up the women’s health clinic where Myra works. 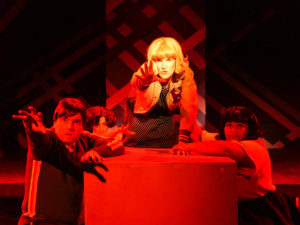 Pacing is everything in this sort of comedy, and director Jennifer Eve Thorn has the show ticking along at just the right clip (abetted by assistant stage manager Maggie Allen, who doubles adroitly as Ms. Ginn’s quick-change dresser). Simplicity is also key here, with a couple of exceptions: Reiko Huffman designed a serviceable set, which is lit effectively by Christopher Loren Renda. Matt Lescault-Wood did his usual stellar work as sound designer. Of course, costumes and wigs are everything, and Danita Lee (costumes) and Missy Bradstreet (wigs) deserve kudos for their designs.

Ms. Jerez displays an easy charm playing male roles. Ms. Clarke tends to stay more in the background, though she has her moments. Mr. Magin is appropriately boyish as the two sons who are not like their mothers.

Of course, the play doesn’t work without a central performance that makes light of the politics and heavy with the visual gags provided by the differences in boobs. Ms. Ginn’s performance proves to be exemplary in both areas.

Feminism may never have been quite so funny.  The Mineola Twins runs through October 24.

Performs Thursdays at 7:30pm, Fridays and Saturdays at 8pm, and Sundays at 2pm. Moxie Theatre is located in a shopping complex, and there is ample parking, both in the complex’s lot and along El Cajon Boulevard. Proof of vaccination against COVID-19 and mask wearing in the theatre are required.