The Pirates of Penzance, San Diego Opera’s first ever Gilbert and Sullivan opera, arrived at Civic Theatre Saturday (October 14)—a kinetic, splashy, gift-wrapped production that left no humorous stone unturned. Offering several outstanding voices, enough choreography for two or three operas, and the luxurious sonic cushion of the San Diego Symphony in the pit, the company made a strong case for including English comic opera in its programming schema. 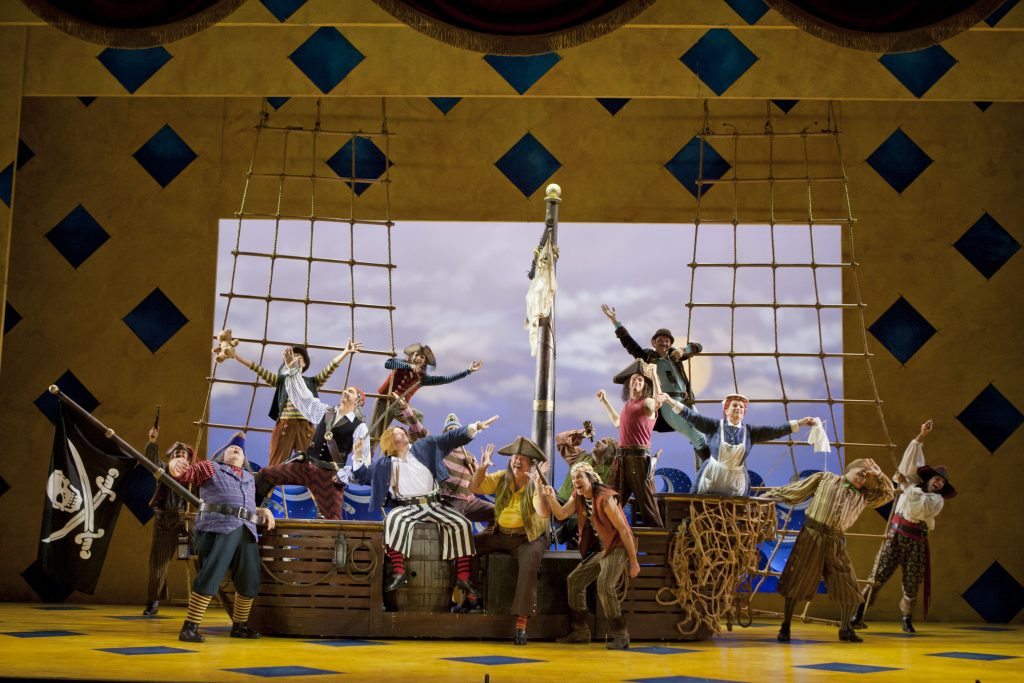 One of Gilbert and Sullivan’s most popular works and one that was actually premiered in the U.S.—it opened to great acclaim in New York City on New Year’s Eve 1879—The Pirates of Penzance proved a solid choice for the company’s 2017-18 season opener.

Throughout the opera, Director and choreographer Seán Curran kept the pace lively and the actors’ feet in almost constant motion, factors that cleverly distracted the audience from the work’s occasional longueurs, especially in the second act. Not that the revered Verdi always avoided such listless moments—Il Trovatore comes easily to mind in this category.

Pirates is a thoroughly ensemble opera—that bevy of the Major-General’s dozen daughters and all of the Pirate King’s pirates—and Curran coached effervescent engagement from the entire cast. In particular, the daughters’ first act ensembles were fired with giddy energy and resonant brilliance; Chorus Master Bruce Stasyna trained them well. 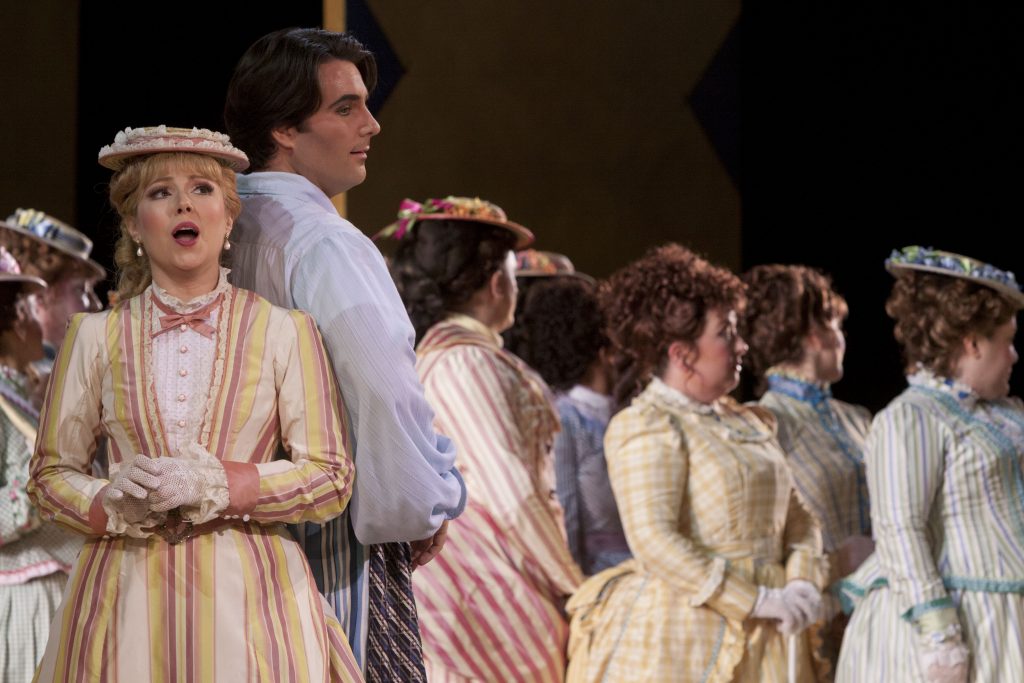 But the stellar soloists made the evening, starting with Maureen McKay’s Mabel, the daughter who boldly pursues the handsome ex-pirate Frederic in spite of her sisters’ unanimous rejection of the lad and his “tainted” past. Her buoyant lyric soprano generously filled Sullivan’s gentle ballad melodies, but when called to soar into the brilliant coloratura stratosphere, she did so with amazing power and apparent ease that did not compromise the beauty of her line one iota. Patrick Carfizzi’s mock-heroic characterization of Major-General Stanley certainly amused the audience, but his hearty, beautifully textured bass-baritone filled the cavernous Civic Theatre gloriously through every part of his range and at every dynamic level. And the stunning rendition of his patter song “I Am the Very Model of a Modern Major General”—arguably the most famous (and most parodied) patter song ever written—shot past with such speed and immaculate diction that try as they could, the orchestra and conductor, the otherwise highly effective Evan Rogister, could not keep up with his pace. San Diego Opera patrons will remember Carfizzi for his well-turned Henry Kissinger in the company’s 2015 Nixon in China—in my book, he can come back any time his schedule allows!

Greer Grimsley, another powerful bass-baritone, made a smashing Pirate King, although once he has sung his introductory aria, which he did with anticipated virile flourish, the score gives him little more to do vocally. Mezzo-soprano Luretta Bybee’s appropriately matronly Ruth put up a courageous fight dramatically and vocally for Frederic’s affections, and as Kate, one of the more outspoken sisters, Sarah-Nicole Carter’s fiery mezzo-soprano added verve and vibrant color to the sisters’ ensemble. 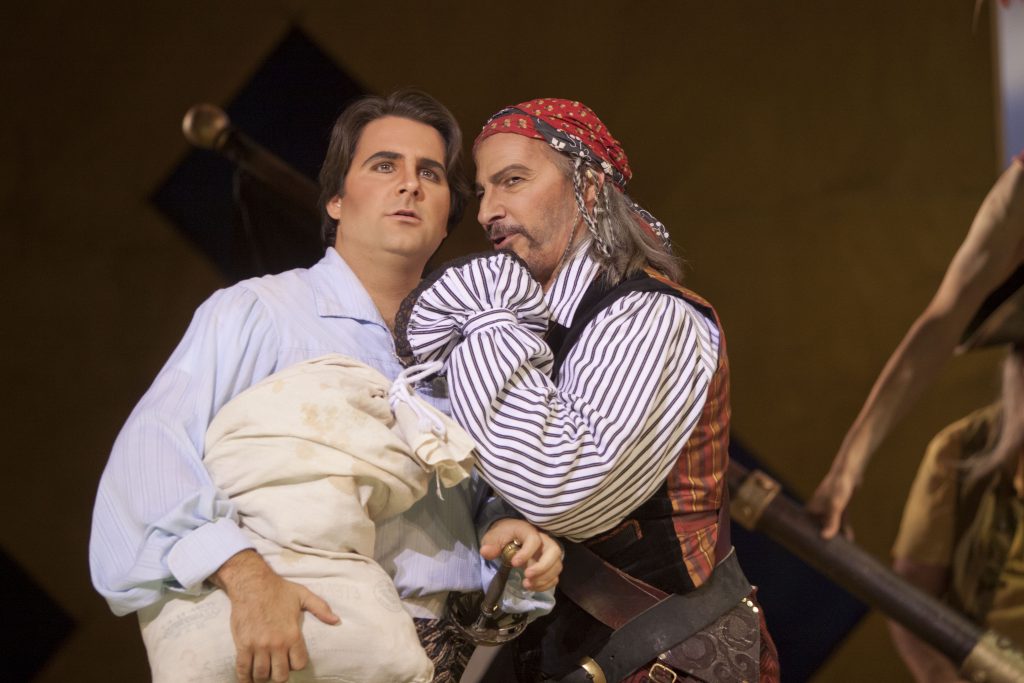 Mackenzie Whitney’s matinee idol appearance made him an ideal candidate for the dashing Frederic, but his flexible tenor lacked both color and power at the top of his range. His intimate love duet with McKay in the first act glowed with sincere ardor, but a leading tenor needs more arrows in his quiver. Bass-baritone Ted Pickell made a genial, expressive Samuel, the Pirate King’s eager Lieutenant, but baritone Michael Sokol’s Police Sergeant sounded more timorous than the role actually required.

Conductor Rogister and the orchestra gave a sumptuous, glowing account of the opera’s overture with its lovely themes and sophisticated orchestration. Their account completely revised my previous low estimation of Gilbert and Sullivan overtures, which are too often attempted by small companies that scrimp on the caliber of the pit orchestra, making an extended overture extended torture. With the exception of this orchestra’s lack of coordination in the Major-General’s patter song, they provided the singers and ensembles with consistent alluring support. 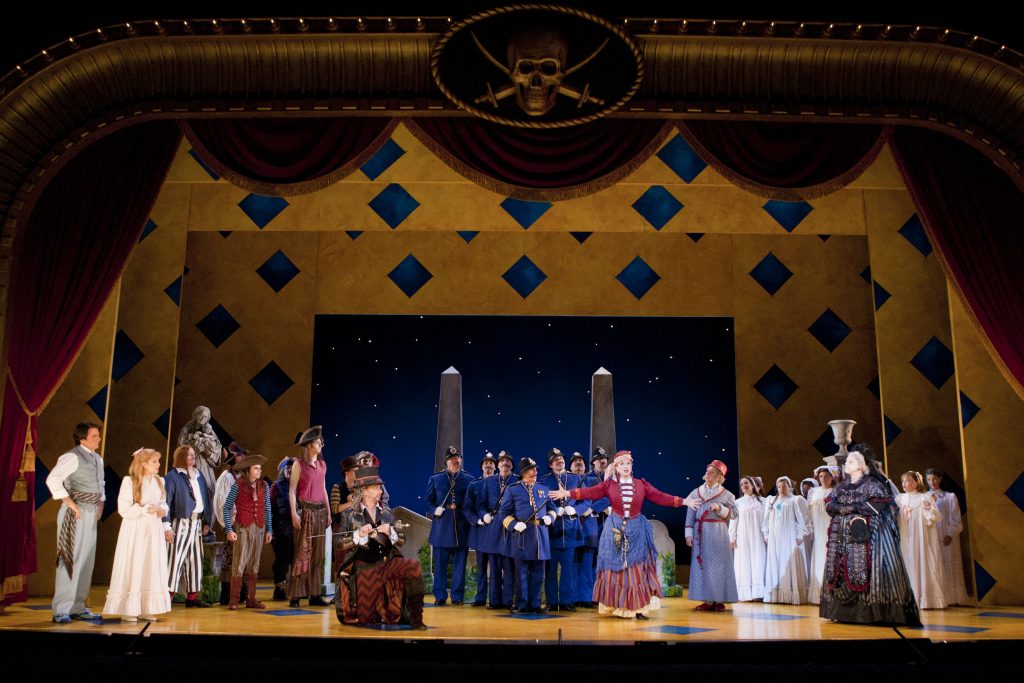 James Schuette’s illuminated British music hall proscenium placed at the front of the Civic Theatre stage neatly focused the drama and reinforced the work’s late 1800s period tone, as did his elaborate Victorian garb, although the children’s picture-book bright pastel hues for the women’s costumes might have surprised Victorian audiences. Sadly, once the clever, oversized toy pirate ship left the stage early in the first act, we never saw it again, although the short pirate with the teddy bear kept popping up here and there.

Sporting a large black pirate hat and a black eye-patch, San Diego General Director delivered his opening night welcome to the audience, clearly an indication that the company wanted its audience to take in every bit of humor and whimsy this production had to offer—in addition to its delightful music, of course. On the theater’s orchestra level I can vouch that the audience laughed more readily and delighted in the humor and onstage pranks with more alacrity than I have observed in other comic opera productions presented by this company.

By longstanding tradition Italian opera buffa, French opéra bouffe, and Viennese operetta have a place in the overall planning of major opera houses everywhere. I see no reason to exclude Arthur Sullivan from the company of Jacques Offenbach, Franz Lehár, and Johann Strauss II.

San Diego Opera opened its production of Gilbert and Sullivan’s “The Pirates of Penzance” on Saturday, October 14, 2017, in San Diego’s Civic Theatre. Additional performances are scheduled for October 17, 20, & 22, 2017 in the same venue.