In the San Diego Symphony’s current season without a music director, the presence of guest conductor Johannes Debus on the podium this past weekend (November 11 & 12) provided welcome uplift. His appearance with the orchestra at this time last season with the pianist Joyce Yang revealed an insightful conductor with a sure, clean technique, traits that served him well in his varied all-French program. 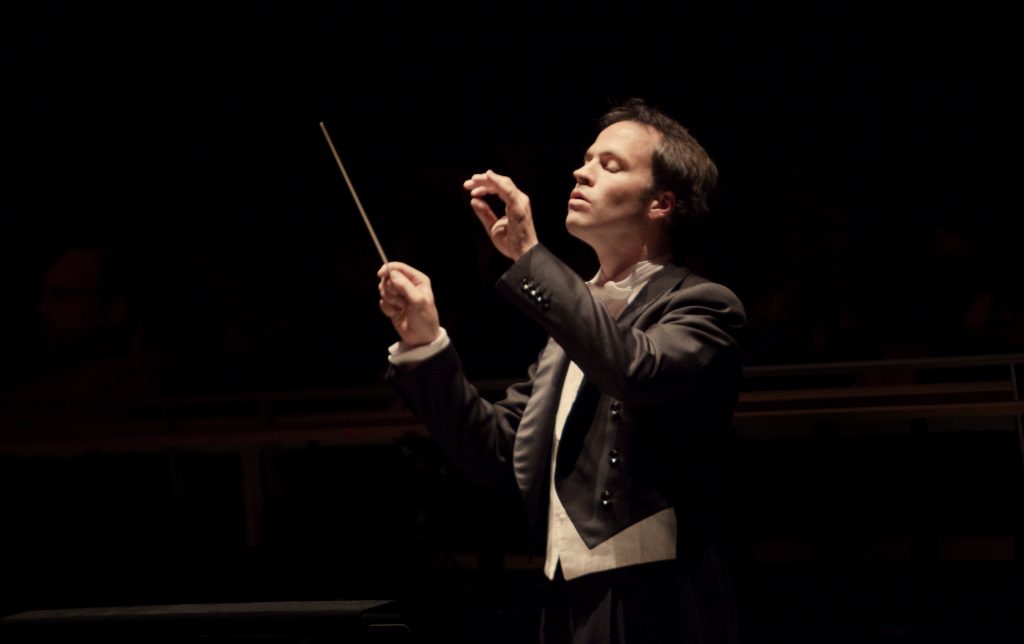 Could he have found a more electric, invigorating opening than the eight-movement Suite from Jean-Phillipe Rameau’s 1735 opera Les Indes galantes? While Rameau’s contemporaries G. F. Handel and J. S. Bach were still crafting musical fortresses with elaborate counterpoint of every classification, Rameau left that tradition behind and focused on writing cascades of sprightly melodies that careened through his colorful orchestra with unfettered glee.

For this mid-18th century music, Debus wisely trimmed down the orchestra’s size and added the requisite harpsichord and snappy percussion. From the frothy formality of the opening “Ouverture” to the terpsichorean abandon of the closing rondo “Tambourins,” this suite provided unalloyed pleasure. Kudos to trumpeters Micah Wilkinson and John Wilds for their stunning, beautifully articulated ceremonial fanfares on piccolo trumpets.

Unfortunately, Louis Lortie’s uninspired account of Ravel’s Piano Concerto in G Major proved a disappointing contrast to the Rameau. In Ravel’s exquisite, wistful slow movement, the heart of this jazz-inflected concerto, Lortie noodled along simply treading water. Not until the woodwind principals—English Horn Andrea Overturf, flute Rose Lombardo, and oboe Sarah Skuster—took up the piano’s theme did this movement begin reveal its enchantment. Debus kept the tempos of the outer movements brisk and the ensembles tight, and Lortie’s dependable technical polish complemented his approach.

Lortie has been appearing with the San Diego Symphony since the days of Yoav Talmi and last performed with the orchestra in 2014. Earlier this year he gave a fine solo recital for the La Jolla Music Society. Perhaps if I did not know how well Lortie usually performs, I would not have been so dispirited with his Ravel.

Debus chose Claude Debussy’s massive tone poem “Ibéria” to flex the orchestra’s muscles and demonstrate his prowess over the vast, restless score. The conductor allowed the jaunty first movement, titled “In the Streets and Byways,” to chortle along amiably, decorated by brilliant flashes of color and intensity from the brass sections. In “The Fragrances of the Night,” time seemed to suspend as Overturf’s haunting English Horn melody wafted over the orchestra, and the finale “The Morning of a Festival Day” gave every section a few measures of glory in this colorful depiction of an Iberian town’s genial preparations for a sun-drenched holiday. The orchestra’s generous response to Debus’ relaxed but confident lead gave the work the spontaneity the composer intended.

In Eric Bomberger’s ever lucid program notes, he described Gabriel Fauré’s Suite from Pelléas et Mélisande as “marked by unusual restraint.” Although Debus and the orchestra gave a winning, deftly detailed performance of the Suite, the work’s restraint proved underwhelming.