The show, at the fine new Performing Arts Complex at Torrey Pines High School, also featured work by Litvak director Sadie Weinberg and two guest artists. Weinberg is laudably committed to showcasing a range of choreographers. Here, it was a very wide range, from the sublime Lux Boreal to a piece that put the focus on one’s experience as a viewer—in this viewer’s case, an experience of annoyance. 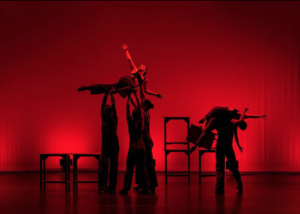 Created by Lux Boreal co-founder Ángel Arámbula, “Desierto Industrial” has become a signature work that’s contributed to the company’s international reputation. A marvel of speed and attack, the dance features six superb dancers slashing through space to a driving percussive score. Each dancer has a small worktable, a fitting symbol of oppression—they even contort their bodies to use the tables as tiny beds.

This beautifully textured work also offers whimsical moments. Dancers tumble in pairs like acrobats, engage in sensuous play, fall to the floor—dreaming?—to what sounds like a music box.

A similarly complex choreographic intelligence is in evidence in Weinberg’s “Light Scene II: Shedding Stories.” This highly narrative piece pits two lovers, Erica Ruse and Nick McGhee, against forces determined to separate them. Ruse and McGhee delicately connect and express their desire through lovely spins that flare their long jackets. 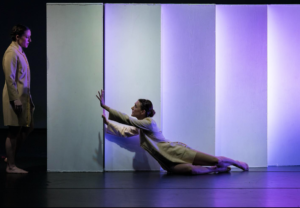 Three adversaries pull the lovers apart and create barriers using six white-painted open boxes, the size and shape of coffins. Giving a prominent role to props, especially large props, is risky, and there’s too much moving coffins around for my taste. But this dance is part of a larger work Weinberg is developing with klezmer artist Yale Strom, and I look forward to seeing it in its entirety.

Guest artist Alex Escalante has spent most of his career in New York and is known for work that “invites viewers to examine and reflect upon their own beliefs.” That’s the case in “Dirty in the Desert,” which opens with an invitation for everyone to sit onstage. The lights go out. In the pitch-dark we hear two people discuss which, among the pressing issues in the world, to protest. “What’s happening?” says a young girl near me, and I figure we all feel a bit disoriented … and perhaps aware of our expectations as audience members. As the discussion goes on for several minutes, I’m also bored. 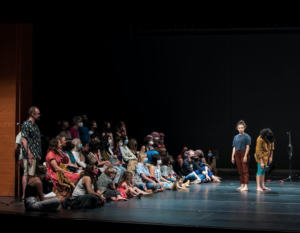 The confusion continues when the lights come on, and a woman pounds on a drum set, making it impossible to hear another woman singing. At some point, the words become audible—the chorus of Paul McCartney’s “Let ’em In,” sung repeatedly by several of the five performers—but that doesn’t make things any clearer. Two people on opposite sides of the stage launch into simplistic rants about how you can’t trust the other side.

Along the way, there are some intriguing movements: yoga warrior lunges with insanely open shoulders, sideways crab scuttles, puppy piles, and belly crawls. I wanted more of this inventive movement! … as well as more coherence and depth.

As she shared in program notes, Litvak company member María José Castillo titled her dance “Estirpe” from a Latin word associated with lineage or ancestry. And she explored her Mexican-U.S. lineage through mixing elements of contemporary and folklorico dance, to music by an onstage mariachi ensemble, Mariachi Champaña. 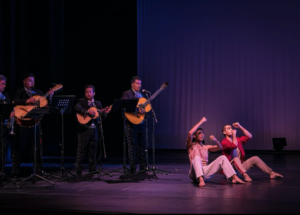 The mariachis, doing a collection of love songs, were a treat. They were also problematic. Their lilting, romantic music set the piece’s tone, and too much of the choreography struck me as one pose after another, with a little flow of movement in between. I would have loved to see Castillo sometimes working against the music, showing the tension that must exist in negotiating a multi-faceted identity.