Australian pianist Lisa Moore opened her long weekend of San Diego performances with an accomplished solo recital Thursday (February 4) for Fresh Sound at Bread and Salt in Barrio Logan. Lionized as New York’s diva of contemporary piano performance, Moore provided generous portions of Philip Glass along with morsels by trendy newer minimalists such as John Luther Adams, Julia Wolfe and Missy Mazzoli, each executed with a fluid touch and relaxed composure that quickly drew the audience into her confidence. 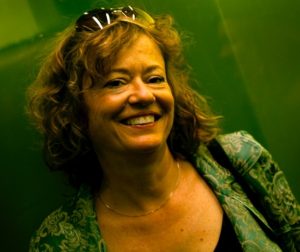 The buildings that comprise Bread and Salt were originally used as a bread factory, but in recent times Fresh Sound producer Bonnie Wright has turned them into a minimalist pâtisserie.

Opening with “Mad Rush,” an extended early solo work (1979) by Glass that has become a minimalist icon, Moore stated her musical credo, which the rest of her program expanded and elucidated. Her deftly controlled yet always nuanced busy right-hand figurations suggested a Chopinesque delicacy, nicely balanced by the composer’s occasional thundering bass notes. Even as the work’s texture thickened and its dynamic level increased, Moore managed to retain its essential serenity.

Moore championed a second generation minimalist, the 2014 Pulitzer Prize for Music recipient John Luther Adams, with a solo etude of chords and clusters sprouting from all parts of the keyboard, but especially from the extreme ends. Similar in structure to Mauricio Kagel’s curious islands of sound, Adams’ rough-edged clusters reminded me of chunks of glacier falling into the ocean along the Alaska coastline. This Adams (not the more celebrated opera-composer John Coolidge Adams) has a way of sounding simultaneously primitive and glorious, which Moore portrayed superbly.

Not until much later in the program, when Moore played Leoš Janáček’s wistful “The Blown-away Leaf” from his collection On an Overgrown Path, did I realize what I was missing in her minimalist offerings. Although the Czech composer wrote his piano music in the early years of the last century, they frequently presaged the spare textures and deft repetitions favored by Glass and his compatriots. But even though Janáček’s melodic ideas tend to be short, even cryptic, they still display interesting shape and actually go somewhere, unlike those of Glass, which tend to be so static and simplistic they could have been copied from a beginning piano student’s instruction book.

Julia Wolfe’s short, explosive piece “Earring” demanded attention, but Missy Mazzoli’s “Orrizonte” for piano and recorded digital track could not have been more inert or boring, and its digital component was little more than a glorified sine wave.

Two other Glass works, “Metamorphosis II” from 1988 and a more recent “Etude No. 2” revealed a complexity of texture and harmonic coloring his early works avoided. The “Etude” struck me as a kind of chaconne, with a repeated chord progression progressively elaborated with winning results.

The clear structure of Moore’s program dwindled into a miscellany of short pieces at the end that included Scriabin’s Prelude No. 5 and Randy Newman’s song “I Think It’s Going to Rain Today,” which Moore both sang and played. I have no complaint whatsoever with Moore’s stellar keyboard technique, but if she is going to sing for the paying public, some vocal coaching is the least she could acquire.