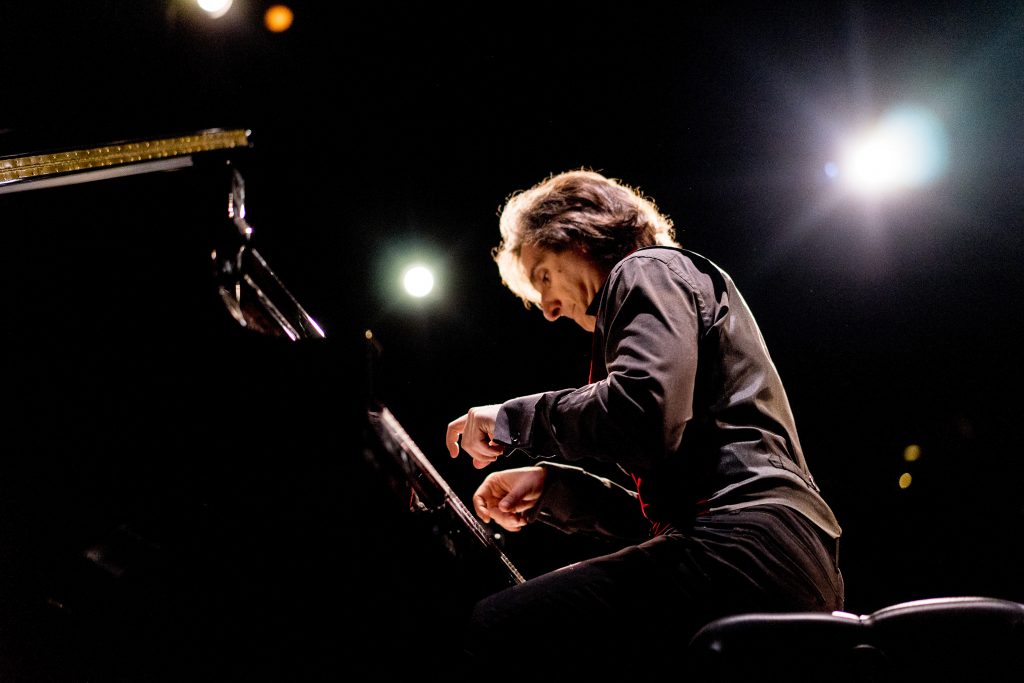 Although Felder is the sole actor on stage, he plays several distinct roles and impersonates a number of minor characters in addition to the great composer. At times he is Felder commenting on his stage creation and contemporary politics; he also becomes the composer in voice and performance at the piano, and then at other times he functions as the historical narrator who interprets the composer’s life, especially at crucial junctures. Felder’s gift is his ability to move among roles and characters with nonchalant confidence: at one moment he is Vladimir Putin delivering pompous oration in Russian; then he turns to mimic pianist and Tchaikovsky mentor Nikolai Rubinstein’s mincing nasal elocution, only to return to his Tchaikovsky persona in slightly affected English colored by a mild but conventional Russian accent.

Felder is far too clever, however, to recount mere biography, although the composer’s biographical timeline does run like a click-track underneath his dialogue. He has added Putin’s virulent homophobia and the Russian government’s recent strident anti-gay laws as counterpoint to his tale of the troubled gay composer who struggled to camoflouge his sexual orientation to avoid his own society’s prejudices and cruelty. Recounting Tchaikovsky’s crushes on younger men and his vain courtship of a few women in this context brought to mind Tom Stoppard’s 1997 The Invention of Love, a play that also portrayed a 19th-century gay artist—the poet A. E. Houseman—in his struggles to love and survive as viewed from the more tolerant perspective of late 20th-century western culture.

Our Great Tchaikovsky shone most brightly when Felder played his adept transcriptions of Tchaikovsky’s greatest hits on the gleaming concert grand that dominated the Lyceum stage. His daring fusion of both the orchestra and solo portions of the opening of the First Piano Concerto amazed me, as did his graceful invocations of portions of the Swan Lake and Nutcracker ballets, to say nothing of his intentionally careening “1812 Overture,” complete with simulated fireworks projected behind him.

Narrating the composer’s youth and early development, Felder stuck to Tchaikovsky’s solo piano pieces, few of which are known because they were meant for commercial consumption. In decades of reviewing piano recitals I cannot recall hearing a single Tchaikovsky solo piano piece performed, although, of course, his piano concertos are staples everywhere. Felder did get useful milage from that doleful G Minor Barcarolle from the composer’s Seasons, Op. 37.

Director Trevor Hay kept Felder in a peripatetic mode when not playing the concert grand, which was defintely a good thing. Too much narration from the piano bench too easily brought to mind dated Victor Borge routines. Felder’s own scenic design worked well for this: at one side of the piano he suggested a luxurious dacha drawing room where Tchaikovsky encountered his contemporaries, and on the other side, an intimate alcove with a large writing desk that allowed him to compose letters to his great patron, Madame von Meck, whom he never met face to face. Tall birch trees graced the back of the stage, which Felder’s narration explained represented the prized garden in the composer’s home outside of Moscow. They suggested to me typical stage designs from productions of his most famous opera, Eugene Onegin.

If the evening started slowly—did we really need to dwell on the young boy’s adoration of his mother— by the time the young composer was fighting the establishment to bring his music to the public and deserved acclaim, Felder’s drama pulsed forward with unabated drive until the composer’s mysterious demise. Felder offered numerous musical insights, including perceptive analyses of the major themes in the Romeo and Juliet Fantasy Overture and the Sixth Symphony that connected them to the composer’s own romantic entanglements. Recounting the composer’s 1891 visit to America to officially open Carnegie Hall, Felder explained that walking the streets of New York City gave inspiration to his emerging new compostion, the Nutcracker ballet. When Felder made this observation he was playing the “Danse Arabe” from Nutcracker, which raised an eyebrow and caused me to muse, “Ah yes, a stroll through the fabled Arab Quarter just blocks from Carnegie Hall.”

Kudos to the Projection Designer Christopher Ash for enchanting designs projected during music from the ballets—sometimes vivid and abstract and on occasion actual dancers. The fireworks over St. Basil’s Cathedral during the “1812 Overture” at first struck me as pure cliché, but I must admit they worked magnificently!

Although Our Great Tchaikovsky approached two hours without intermission, I understand it could not portray every aspect of the composer’s work. I do regret, however, that Felder did not find some way to indicate that a portion of Tchaikovsky’s fame rests on his six operas, two of which remain as staples of the international repertory.

Felder has created a splendid evening of compelling music, engaging drama, and honest history with genuine relevance to contemporary international politics. Could the audience or San Diego Repertory Theatre ask for anything more?