San Diego Opera’s rousing, vibrant production of Daniel Catán’s Florencia en el Amazonas opened Saturday, March 17, at Civic Theatre. With a smartly directed cast of strong, younger singers and Joseph Mechavich conducting the finely tuned San Diego Symphony in the pit, San Diego made an impressive case for Catán’s opera about a celebrated diva’s last journey, a trek up the Amazon River aboard the riverboat El Dorado in search of a lost lover. 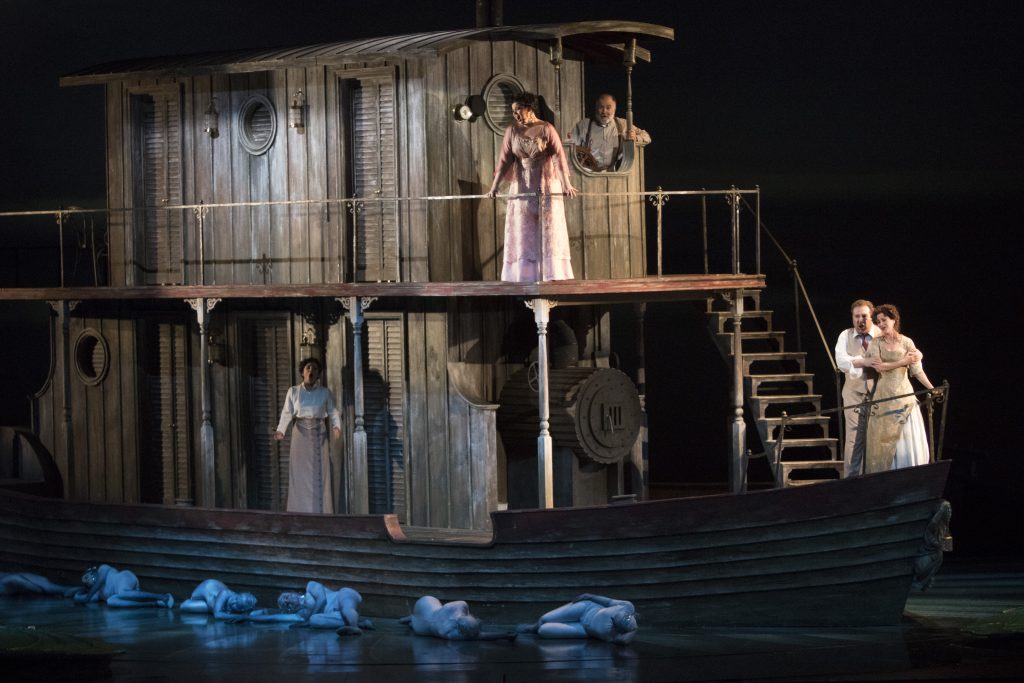 I am tempted to say that San Diego Opera’s Florencia production eclipsed the opera itself. Neither a comedy nor a tragedy, this opulently melodic, beautifully scored opera revolves around a slender plot. In spite of dashes of magical realism in the style of Gabriel Garcia Márquez–librettist Marcela Fuentes-Berain was a follower of Márquez—the story drifts slowly through modest conflicts to a deus ex machina conclusion that does not satisfy the aspirations the composer builds in his first act. 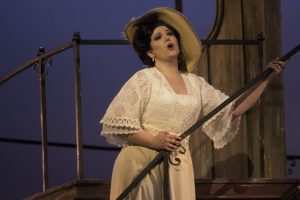 In the title role of Florencia Grimaldi, Elaine Alvarez employed her ample, plush, verismo-honed soprano to thrilling effect in each of her big solo arias—Catán aptly gave his opera star leading lady an extended aria in each act. Because Grimaldi is traveling on the boat incognito, Alvarez had to avoid the hauteur of a Tosca in the company of her fellow travelers, but she carried off Grimaldi’s innate dignity with cool security.

The composer wrote an almost equally juicy soprano role for Rosalba, the young journalist eager to write a biography of Grimaldi, and María Fernando Castillo brandished her supple, marvelously focused soprano—especially in her commanding upper register—to telling effect. Riolobo functions as both a passenger on the riverboat and the otherworldly conjurer of the water sprites, a role clearly etched in my memory by baritone Nathan Gunn in the 1996 Los Angeles Opera production. In San Diego, Luis Alejandro Orozco brought several important virtues to this key role: his lithe, dark-edged baritone; nimble choreography, and the requisite tattoo-emblazoned physique, which are, according to my sources, “absolutely real.” 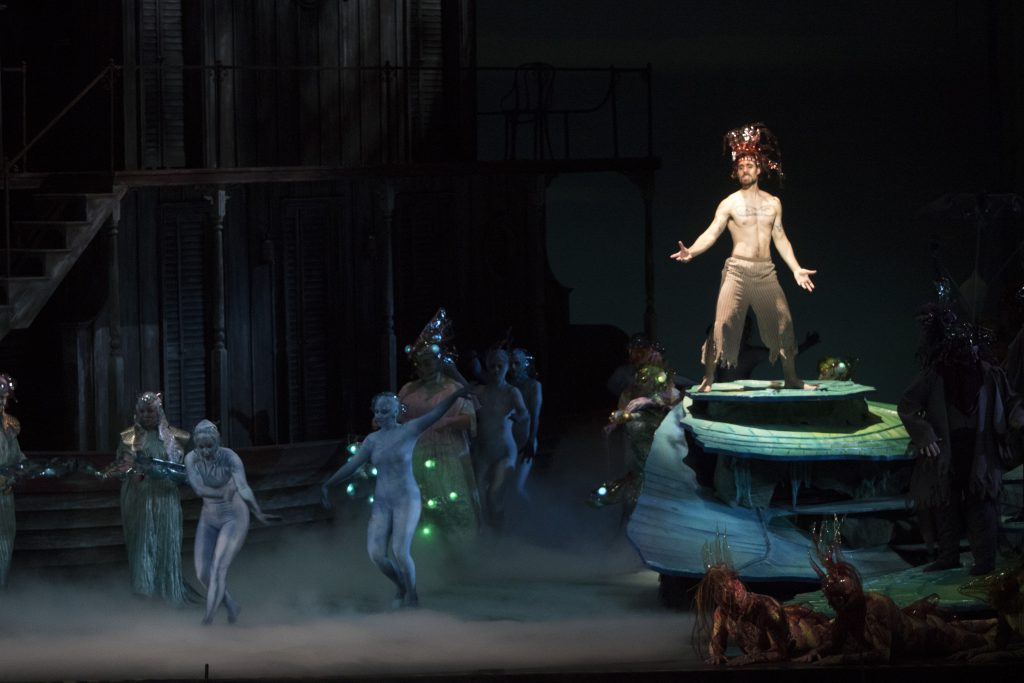 Tenor Daniel Montenegro as Arcadio, the Boat Captain’s nephew and admirer of Rosalba, sang the aspiring swain with ardent grace and dash, although he was too easily overpowered by Castillo in their duets. Baritone Levi Hernandez and mezzo-soprano Adrina Zabala as the bickering long married couple traveling to Manuas with the rest of the boat’s travelers sang with sleek assurance. The rich sonority of Hernandez’s baritone announced itself early in the opera, but we had to wait until near the end for Zabala to open up the compelling breadth of her mezzo. Unfortunately, through much of the opera, her character is limited to short, snide retorts. Though never at the center of the plot, baritone Hector Vásquez filled the Ship Captain’s role with vocal authority and gravitas to spare.

In its customary fashion, Bruce Stasyna’s opera chorus sang boldly and well, although its role in the plot is modest. On the other hand, Catán gave the orchestra Wagnerian importance, and Mechavich rallied his forces with consummate skill, providing commanding, lush waves of sonic allure, giving full flight to the composer’s sophisticated orchestration.

Mark Frederick Smith’s smart unit set, a two-story riverboat replica that could turn 360 degrees, accommodated the plot admirably: characters entering and exiting the deck from their cabins and even enjoying a meal on the upper deck situated over the paddle wheel. Originally designed for the Jacobs School of Music at Indiana University, the set fit the cavernous Civic Theatre stage perfectly. Candace Evans, who also directed the Indiana University production of Florencia, orchestrated the singers’ movements and interchanges deftly. Her choreography of the water sprites around the boat proved clever and engaging, although, after a time the parade of jungle animals marching across the stage became repetitious.

Costume Designer Linda Pisano sagely chose lighter hues in smart, cool linen for the travelers’ attire, and darker greens to black for the jungle denizens. I particularly appreciated her inventive masks as well as the striking headgear for Riolobo and his kinky creatures.

Kudos to San Diego Opera General Director David Bennett for bringing Florencia en el Amazonas to San Diego. In 1994 this company introduced Daniel Catán, then an unknown Mexican composer in the U.S.A., with a fine production of his opera Rappacini’s Daughter, an event that led to the commissioning of Florencias by three major North American opera companies. The work has enjoyed success on opera stages worldwide, and to experience it under the auspices of San Diego Opera has provided it a unique and deserved  “homecoming.”