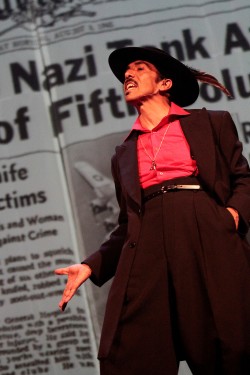 Seeing San Diego REP’s excellent season-opening production of Zoot Suit left me wondering about the role of politics in theatre and theatre in politics. It’s doubtful that the theatre will impinge much into the upcoming presidential race (though President Obama held a fundraiser on Broadway recently and has seen at least a couple of Broadway shows while in office, while Governor Romney has avowed that he’d like to see The Book of Mormon when he has some free time). Even so, a revival of the late Gore Vidal’s play, The Best Man was still running at the time of his death, reminding Broadway audiences that politics is both a noble and a dirty business.

In fact, most theatre worth seeing is political at some level, though that level may not be readily apparent or easily overlooked.  Even a classic such as Fiddler on the Roof, now wowing audiences at Moonlight Amphitheatre in Vista, is based on stories of small town life and loves among Russian pogroms against towns that held concentrations of Jews. 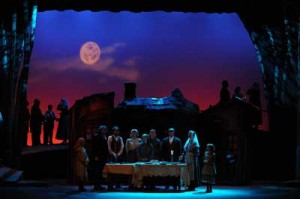 There’s various degrees of political, though.  Zoot Suit, which was written by Luis Valdez, the maestro of Chicano theatre, is openly agitprop, albeit highly entertaining.  His character of El Pachuco (Raul Cardona in the REP’s production; Edward James Olmos in the original) embodies both Chicano pride and a means of thumbing one’s nose at the dominant society, and the large-scale production provided more work for Equity actors, most of them local, than a lot of San Diego productions.  But, it also plays to the emotions of audiences who identify with the injustices portrayed and urges them to connect the play’s story to contemporary experience.

Degree of political content is undoubtedly what separates agitprop from entertainment.  In Fiddler, we are more interested in the family dramas and the love stories, and the pogroms are in the background and presented almost apologetically.  In Zoot Suit the story focuses on the wrongs done to the characters, in particular by individuals who looked down on Chicano culture.  Interestingly, Fiddler’s ending is a sad one, while Zoot Suit’s conclusion is favorable to the characters.  But, each production feels as though the storyline went the other way.

Sometimes, rage makes for highly effective theatre.  New York audiences re-discovered Larry Kramer’s The Normal Heart last season in a revival that was also its Broadway debut.  Cited as one of the best English-language plays of the 20thCentury, Mr. Kramer’s screed against the botched response to the AIDS epidemic nearly jumped off the stage, and Mr. Kramer himself fanned the flames by leafleting audiences after performances with an open letter about what he considered to be the still-inadequate response. Washington, DC’s, Arena Stage, itself no stranger to political theatre, mounted a recent sold-out production as well.  No San Diego production has been announced as of yet, but I hope we see one, if for no other reason than to push the entertainingly inflammatory Mr. Kramer to travel here.

In fact, San Diego has seen a number of new plays or premieres in the past few months, and many of them had some political content.  Moxie’s production of Zsa Zsa Gershick’s Coming Attractions reminded audiences that lesbians in Hollywood needed to be even more closeted than their gay male counterparts, while Diversionary’s production of the new musical, Harmony, Kansas, featured a storyline that focused the perils of being too far “out” as a gay man in rural America. La Jolla Playhouse’s Blood and Giftswas set in 1980s Afghanistan as a cold war battleground, but the history portrayed chillingly foretold the current state of U.S. relations in the region.  None of these shows constituted agitprop, but they were all political in the sense that they portrayed issues that have generated contention in U. S. society.

The recent production that came closest to agitprop without crossing the line, however, was the Old Globe’s The Scottsboro Boys. This musical about a historical incident of racial injustice provided what might have been a searing indictment of contemporary U. S. race relations, but it hedged its bets by wrapping the story within some of the conventions of a minstrel show.  I complained at the time that the device was a flawed one, but plenty of people got the intended message loud and clear.  What probably provided the biggest impact, though, was the reveal, at the end of the story, of the identity of the only woman character, who spent most of the evening observing the action of the otherwise all-male cast. (I won’t spoil this point for those of you who didn’t see the show, as it is scheduled to play Los Angeles in the upcoming months).

Politics makes theatre interesting, but too much can spoil the fun.  There’s room for some agitprop but a steady diet of it might drive audiences away.  Still, more overtly political theatre is on the way.  Next month, The Old Globe will mount Allegiance – A New American Musical, about U. S. citizens of Japanese descent who were held in camps during World War II, the REP brings us Exit Interview, about a professor being dismissed for his radical beliefs, Cygnet brings us Mistakes Were Made, a story that mixes Hollywood and global politics, and Mo’olelo Performing Arts mounts Kita y Fernanda, Tanya Saracho’s study of Chicano immigration and class.

Combined with the political drama of the national election, it should be an interesting fall.