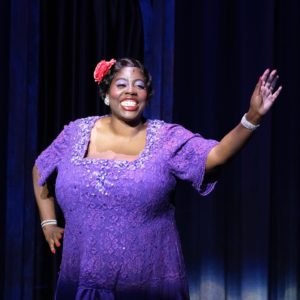 Directed by Ken Page, one of the original members of the Broadway cast, Ain’t Misbehavin’ is a standalone piece that bridges the gap between revue and musical. The production, with music by Thomas “Fats” Waller’ and conceived by Richard Maltby, Jr. and Murray Horwitz, features a live jazz band with a conductor on keys (in this case, the pianist has been brilliantly placed onstage on a moving set piece) and five singer/actors who bring stories to life one after another through uninterrupted songs.

As a show, Ain’t Misbehavin’ is unlike any other. Like many song cycles, each tune is a standalone, with the greater composite tied together by theme… in this case, the approximately 30 songs serve as a celebration of Fats Waller and the great art that he created as a musician in the era of swing. Unlike other shows, however, there is little dialogue; while this can pose a challenge with staging, as it eliminates a prescribed throughline, it goes a long way toward preserving the integrity of the artist’s own voice in the finished work.

This production stars Felicia Fairley, Paula Galloway, Mark Anthony Howard, Katie Porter, and DeAndre Simmons, each performer stepping into and out of songs that range from sentimental to bawdy. The mood, like the tempo and energy in the songs, fluctuates over the course of the evening, and the actors are seamless in shifting from one story to another. For example, Galloway, in her West Coast debut as Nell, delivers the elegantly staged “Mean to Me” in a carefully crafted and delightfully emotive rendition, and this subsequently rolls into a jazzy “Your Feet’s too Big,” featuring Simmons’ perfectly timed physical comedy and charisma. Due to the nature of the show, each performer has their own opportunity to shine, and shine they do. Each one of the talented actors had bright spots over the course of the evening, and perhaps the best moment of the show is the iconic “Handful of Keys” in mid-Act 1 with its fun, bright choreography, fast-paced energy, and 5-part harmonies. 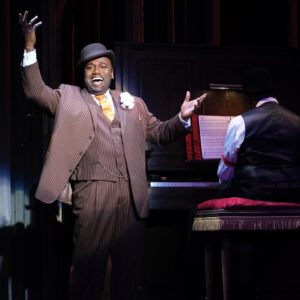 As you can imagine, the show is also a heavy lift for the 7-piece band, but one that the performers rise to the occasion on; I would be remiss to not acknowledge the incredible talent in the group: conductor/pianist Kevin Toney, reed players Malcolm Jones and John Bowman, trumpet player Thomas Alforque, trombonist Wendell Kelly, bassist Kevin Cooper, and percussionist Danny King. It was lovely that the director planned a moment at the top of the second act for the band to come forward and jive with the audience.

This iteration at the Center for the Arts in Escondido is beautifully set amidst artfully draped curtains, chandeliers, and cabaret tables, and is framed by a series of projections (credit to scenic designer Stephen Gifford and projections designer Blake McCarty) which tie in visual artwork, photos of the time, and hints of sheet music, and the lighting throughout the production (credit to Steven Young) is really lovely and helps with the ever-shifting moods.

Ain’t Misbehavin’: The Fats Waller Musical Show is a celebration of the beauty intrinsic to the genre as captured by the man himself, Fats Waller, and is a testament to his skill and soul. Take a trip to the Harlem Renaissance and soak in the energy and the magic at the Center Theater while you can (evening shows are on Thursdays, Fridays, and Saturdays at 7:30 p.m. and matinees on Saturdays and Sundays at 2 p.m.)  – the production closes October 8.