If there is any consolation in surviving an entire San Diego Symphony season without benefit of a music director, it is the occasional visit of maestro Edo de Waart conducting the orchestra. De Waart opened the 2017-18 season last fall, and Friday (May 25) he conducted the opening concert of the Jacobs Masterworks series’ final weekend. Since de Waart stepped in at the last moment to take the place of an ailing Neville Mariner in January of 2015, over numerous visits he has amply demonstrated his command on the podium and has enjoyed the orchestra’s unusually passionate yet polished response. 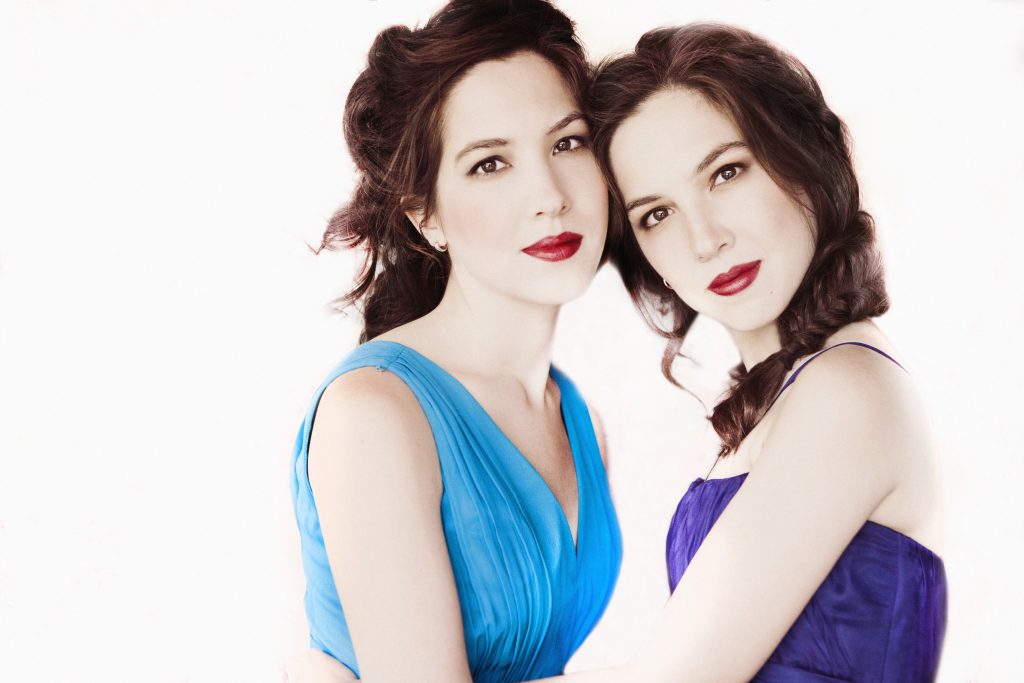 His delightful program balanced a tip of the hat to the Bernstein centennial—his evergreen Candide Overture—with Francis Poulenc’s show-stopping Concerto for Two Pianos featuring the effusive Naughton sisters and Johannes Brahms’ profound Symphony No. 2 in D Major. In my book, at least, that represents something for everyone, and the Copley Symphony Hall audience responded with generous affirmation.

With its sophisticated, splashy combination of high and low musical culture, Poulenc’s 1932 Concerto for Two Pianos looks back to the high living of the Roaring Twenties. Although the composer cast the work in the traditional three movement pattern of the solo concerto, the whole piece constantly moves back and forth between chunks of sizzling, zesty motifs that race by leaving scarcely a trace and slow, sentimental chansons that enchant the listener with voluptuous orchestrations and sumptuous melodies.

In short, the concerto appears to be a mirror of the composer lui-même: the dashing boulevardier and the serious, melancholic introvert.

Christina and Michelle Naughton charmed La Jolla SummerFest audiences last season, and the duo proved even more smashing in the Poulenc concerto. Their bravura technique amply dispatched the flashy challenges the composer larded into his score—he was a superb pianist himself and played one of the piano parts at the Venice premiere—and their aptly indulgent caressing of his melodic riches could not have been more sympathetic. De Waart both warmly encouraged and expertly focused the orchestra’s exuberance, uniting soloists and orchestra players in a rewarding sonic conspiracy.

As if we had not experienced sufficient exuberance, the Naughton sisters played a devilishly difficult and flamboyant four-hand arrangement of John Adams’ orchestral work “Short Ride in a Fast Machine” as their encore.

De Waart’s account of Brahms’ Second Symphony sagely balanced its lofty neoclassical structure with just the right amount of Romantic passion. For example, in the first movement, when we finally arrived at the cello’s statement of the main theme, de Waart made certain that it was announced with an insouciant, buoyant air that made the dramatic grandeur of its development by the full orchestra a pleasurable surprise. In the Adagio, the purring low strings again worked their magic as Principal Horn Benjamin Jaber eloquently shaped one of those noble slow themes that Brahms could write in his sleep, only to be followed by a bouquet of shimmering solos from the first chair woodwinds.

In the burly scherzo, de Waart demanded suave, crisp articulations from the winds, which gave sparkling definition to this vivid movement. After the glorious, cascading motifs that announced the Allegro con spirito, de Waart confidently guided the orchestra through the sublimely structured finale with its resplendent brass-crowned conclusion.

De Waart took the Candide Overture a bit faster than one usually hears, and although the orchestra complied admirably with his breathless pace, I thought it lost some of its charm in the process.