The four nice, sincere people in Bekah Brunstetter’s play The Cake are wrestling with realities new to them and frankly, to most of us. It’s not a spoiler to say the author is hopeful everything can ultimately work out tolerably well.

It doesn’t seem that way at first, probably because of the real-life parallel to this story now among the dreary burdens of the era: The Supreme Court pondering whether a baker can refuse on religious grounds to make a wedding cake for a gay couple.

Deciding whether cake-decorating is free speech is only a vehicle, of course, for a much larger and more urgent agenda of tolerance and respect for difference in cultures. That’s truly a big concern, as the world gets more crowded.

Time was that young Jennifer, growing into a recognition of how pinched and limited her rural North Carolina upbringing really was for her, could just leave forever. But now the world is shrunken and the sophisticated Jen finds the past of the girl Jenny to be not only sweet in memory but easy to access.

So, back in town to plan her wedding, Jen is working her way through a long list of preparations for the dream ceremonies of her childhood, including the elaborate centerpiece of a custom-made cake from her old family friend Della, the jolly blonde baker of every bride’s fantasy. 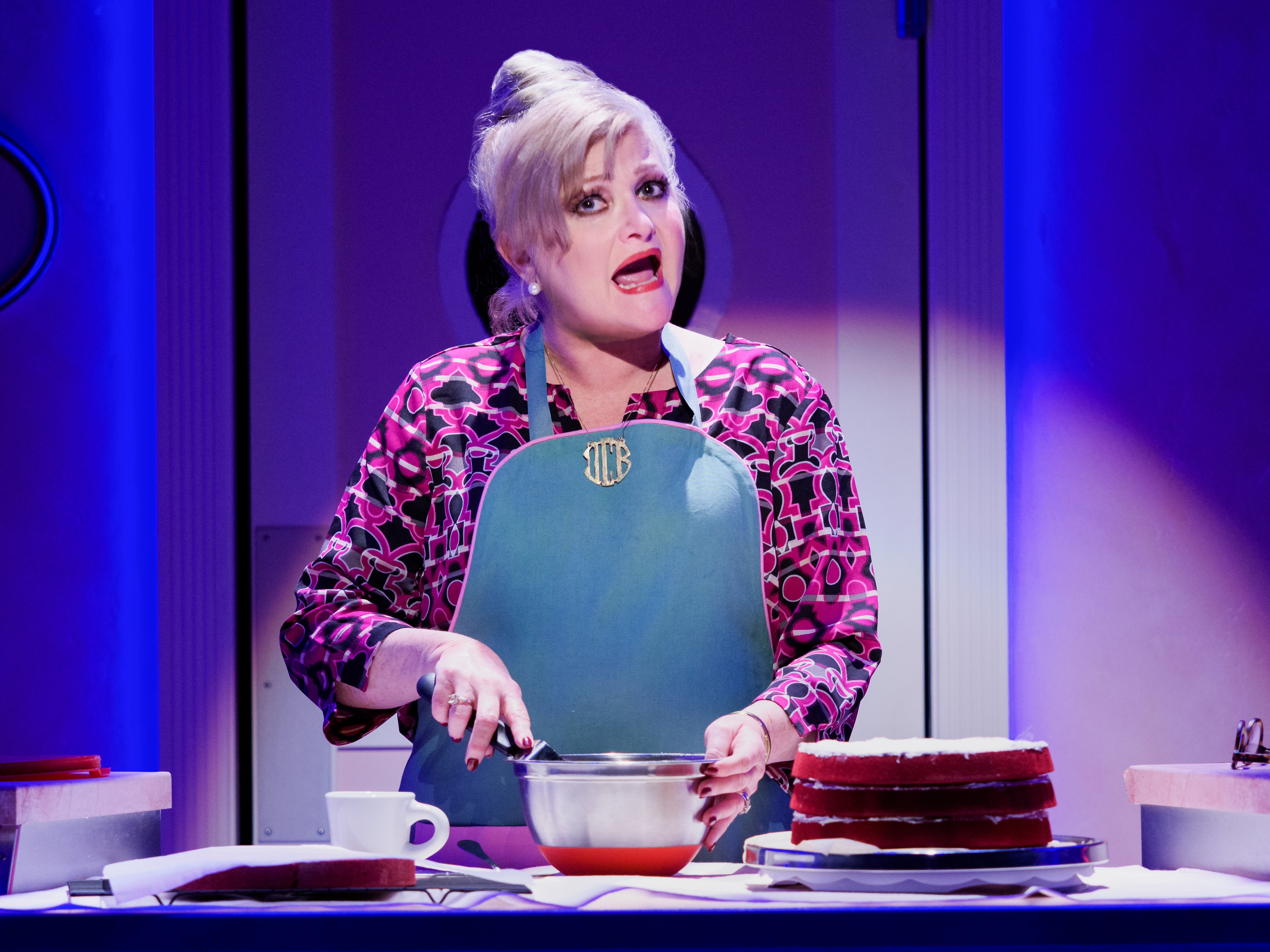 Faith Prince in The Cake at the La Jolla Playhouse. Jim Carmody Photo

It is Della who introduces audiences to the play with a tour of her sugarplum world. The tourist Macy – tall, lanky, black and wry – seems fascinated, taking copious notes and asking questions with possibly just a bit too much condescension. But Della, who has basked in national TV as a baking contest finalist, is used to handling attitude. And all is forgotten with the arrival of Jenny (“No, Jen.”) and her big announcement. The reunion fuss is an opportunity to stress the role of Della in Jen’s youth and her delight at the return of the prodigal.

It’s Macy, impatient with the girl-talk, who drops the bomb. This will be a wedding with two brides. She’s the other one. And Della, adjusting quickly, is only sorry that a closer look at her work schedule confirms that she can’t handle another order at the necessary time, not even for Jenny.

The rest of the play is about everybody’s efforts to adjust to new realities without slamming doors. There are moments positive and negative, high and low, serious and goofy. But nobody lawyers up. This is not a play with a need for anguish. Exasperation outweighs anger. In its best moments, it shows how daylight works well on dark old problems. Everybody learns something but there are no big corners to turn. And, as noted, the playwright sees hope.

As Della, Faith Prince is a determined sunbeam smart enough to recognize reality and understand accommodation without turning cynical. Denied a child with the husband she’s still in love with (and the doctors have assigned blame), she has soldiered on, her fantasies submerged in cake-dough, until she’s whapped in the face with the wider world out there. Hail to Prince for touching every station of the cliché without overlooking the subtle flourish of emphasis.

Wayne Duvall’s husband is even more off the shelf, a stolid plumber who enacts manly southern rituals as a duty and chooses to play it safe anytime emotion is threatened. But he also travels what may be the longest road here and delivers the biggest yak of the show. 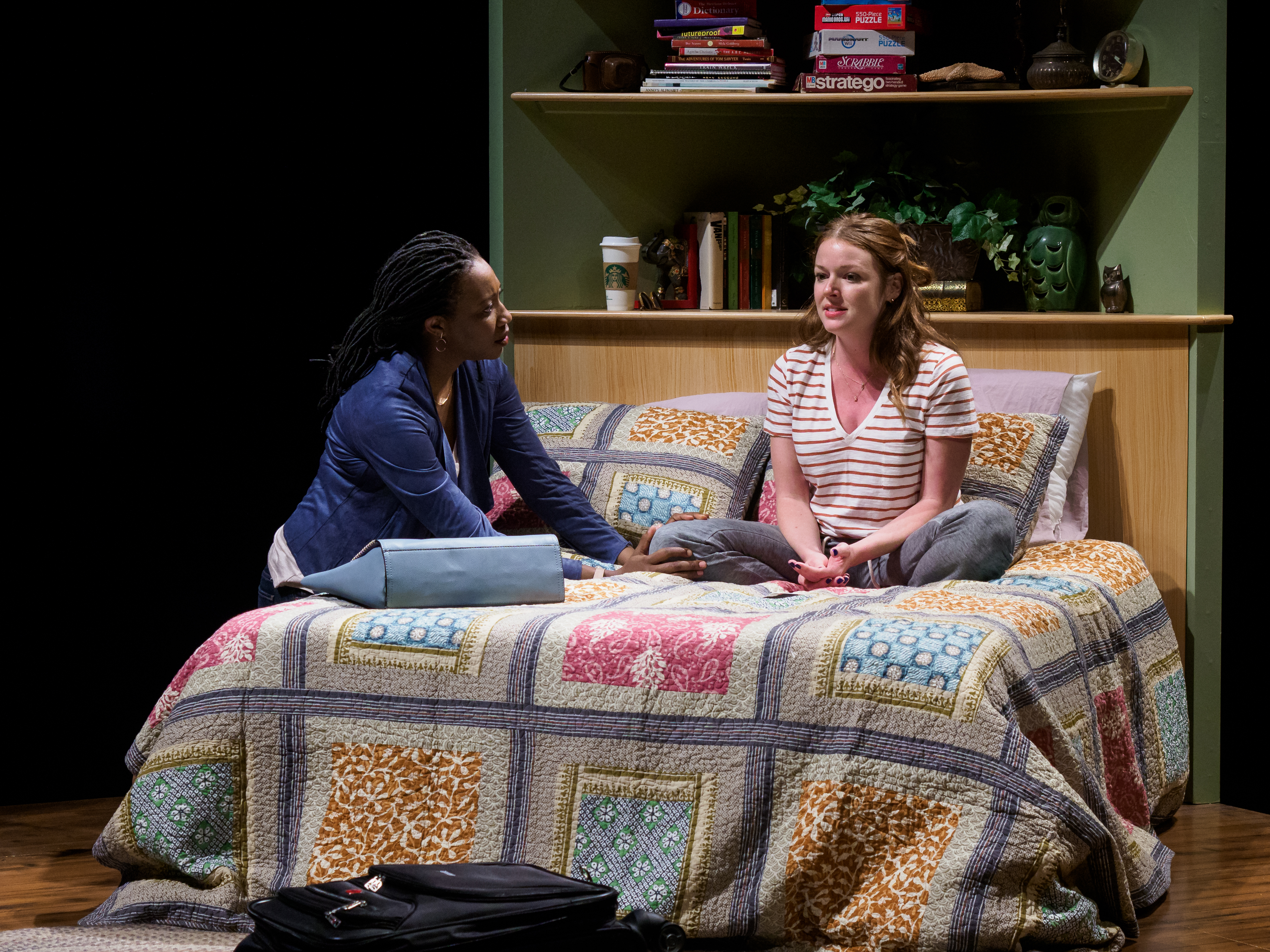 Miriam A. Hyman, left, and Aubrey Dollar in The Cake at the La Jolla Playhouse. Jim Carmody Photo

Macy is a pain even if everything she says seems true and worthy. Raised as she was in a freethinking intellectual paradise, she finds it only too easy to sneer, especially at different perceptions that seem to her askew. Miriam A. Hyman plays her with grace and steely self-confidence, a titan startled by emotion, unable to find much slack to give. And Aubrey Dollar is yearning and clueless as (warning: literary reference) yet another North Carolinian seeking to go home again.

Casey Stangl has staged the play as a smoothly affectionate narrative with room for everybody and truths that neither wound nor hide. There’s opportunity for more fantasy but the show seems at odds with itself in staging concept. There’s too much space on the Potiker Theatre stage and the intensely realistic sets of David F. Weiner don’t fill it well. Elizabeth Harper could have helped more by pinching in her lighting design but instead just made sure that every detail was acknowledged. No problem with Denitsa Bliznakova’s costumes. Most of us dress alike these days anyway.

There are useful lessons to be learned here, presented more gently than might be expected, and plenty of room for fond fun. One can only hope that real-world doppelganger (which emerged only after Brunstetter began work on this play, she says) turns out as well. Help me here with the hope, please?

(Continues in the UCSD Potiker Theatre at7:30 Tuesdays and Wednesdays; 8 p.m. Thursdays-Saturdays; at 2 p.m. Saturdays and Sundays; and at 7 p.m. Sundays through March 4, 2018.)