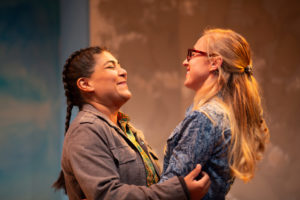 Part of “ethereal” comes from how the play jumps around in time. It is set both in New York City and in Cuba and while not told in chronological order (which can be confusing, sometimes) it does all fit together nicely as an overall experience. Like the blue sky that the title references, the play seems more fit to be experienced than described.

I’ll try, though. Zelia (Sofia Sassone) has been dealing with the reality of Yadra (Zuleyma Guevara), her mother’s Alzheimer’s disease. She’s also caught up in a relationship with Loré (Olivia Espinosa). Because Zelia is not fully out as a lesbian, there are emotional complications with Loré, who she truly loves. In addition, Zelia is conscious of differences in how Latinas of different skin colors are treated: Zelia presents as white, Loré as brown, and Yadra as black. 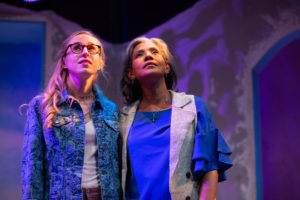 After Yadra’s death, Zelia decides to visit Cuba to seek out her mother’s aunt, who remained there while others in the family made their way to the U. S. The death of her mother and this decision to travel have brought Zelia and Loré closer together, and they go to Cuba as a couple. Locating Ester (Ms. Guevaram), the aunt, allows Zelia and Loré to learn of the family dynamics that drove the decisions to leave or stay. These interactions are portrayed in flashback, with Ms. Sassone and Ms. Espinosa portraying historical characters.

Music is what unites family members and generations, and guitarist Diana Cervera plays a key role in the storytelling.

Ms. Sassone, in particular, has a complicated emotional journey, and Ms. Espinosa both recognizes and lovingly helps her to navigate it. These are heartfelt performances of characters who love each other very much. Ms. Guevara’s portrayal of an Alzheimer’s patient is extremely low key but when she assumes the role of Ester, the aunt, she comes into her own.

Director Maria Patrice Amon stages Azul to differentiate the various time changes and to focus on the relationships among the characters. The resulting ensemble commitment of the cast is palpable. Samantha Rojales’ scenic design accommodates the play’s various locales within the Diversionary stage space, which is wider than it is deep. Winston G. Limauge compliments the stage design with his lighting design. Faith James’ costume design suits the characters and accommodates the multiple roles each actor plays. Andrew Gutierrez both designed the sound and serves as music director for the guitar accompaniment and the folk songs that the characters perform.

Diversionary’s season so far has focused on family, though as much on families we create as families into which we are born. Azul illustrate well how love and attention to one’s heritage are essential in the family creation process.

Performs Thursdays at 7pm, Fridays and Saturdays at 8pm, and Sundays at 2pm through December 19 on the Diversionary mainstage. Parking in University Heights is difficult to find. Allow ample time to hunt or use transit or a drop-off service.