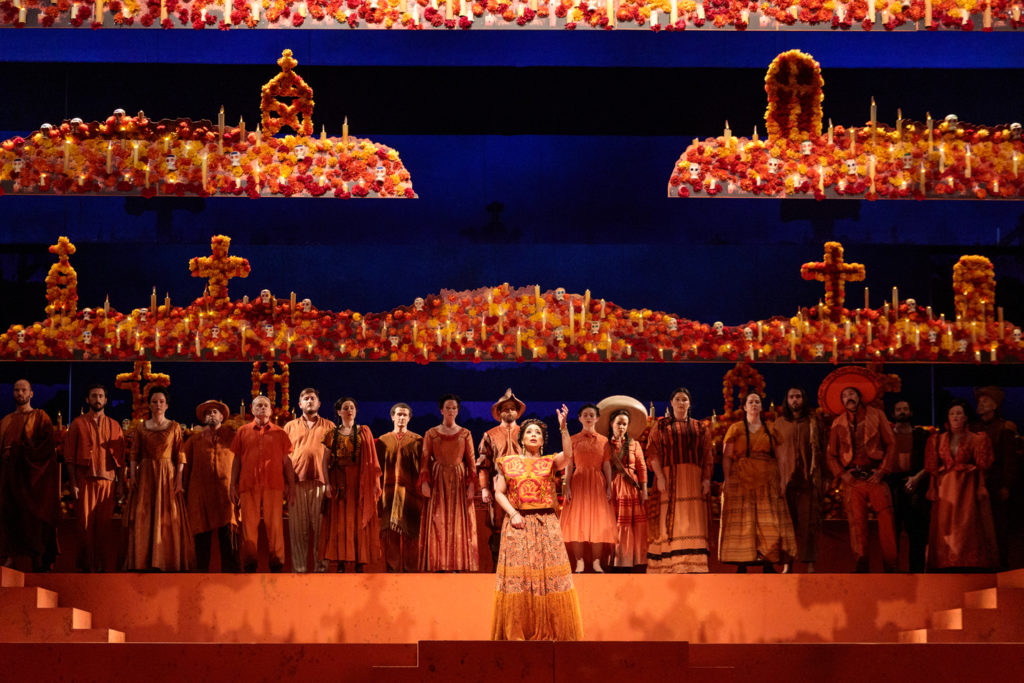 Librettist Nilo Cruz chose the popular Mexican festival the Día de los muertos [Day of the Dead] on which to unfold his inventively imagined story of Rivera’s attempt to contact his beloved deceased wife Frida Kahlo in order to alleviate his own fear of death as well as his lack of faith. Because it is believed that on the Day of the Dead members of the underworld may be given—under special circumstances—a one-day pass to return to the world of the living, Rivera hopes this magical day will bring his Frida back to him.

The opera moves back and forth between the world of the living and the underworld, where Catrina, the Keeper of the Souls, rules. When Frida learns that Diego has wished for her return on the Day of the Dead, at first she refuses to return because of the suffering she endured in that realm. But Leonardo, a young man of the underworld obsessed with impersonating Greta Garbo in her Queen Christina movie role, persuades Frida to return. After some fractious score settling in the real world, Frida and Diego reconcile, which allows Diego to appeal to the God of the underworld to allow him to follow Frida back to the underworld, and Diego dies peacefully.

Guadalupe Paz gave an overpowering account of Kahlo, displaying a certitude grounded in the experience of the painter’s tumultuous life, and Paz’s resplendent, colorful mezzo-soprano filled the theater with gleaming self-confidence. Alfredo Daza skillfully portrayed a Rivera marked by the willfulness of international celebrity, yet secretly haunted by his mortality, and Daza’s rich baritone amply communicated both aspects of Rivera’s personality.

Like the chorus in Mussorgsky’s Boris Godunov, as the denizens of the underworld, the chorus of this opera provides an important character in the story, and the well-tuned ensembles of the San Diego Opera Chorus, directed by Bruce Stasyna, greatly enriched the opera’s tonal palette. Under the direction of Roberto Kalb, the orchestra gave a riveting account of Frank’s colorful but elegantly transparent score that deftly tailors individual instruments and combinations to specific characters.

Ballina’s opening scena immediately suggested a dream world: a dark, multi-layered cemetery with hundreds of twinkling votive candles. When illuminated—Victor Zapatero devised the subtle lighting scheme—the scene took on a dusky dark orange hue. To signal a scene change to the underground world, the sections of the cemetery ascended to hover over the activity below, where a robust marigold color bathed all these underground scenes and denizens. Later scenes at Frida’s Casa Azul glowed in a deep, almost midnight blue. 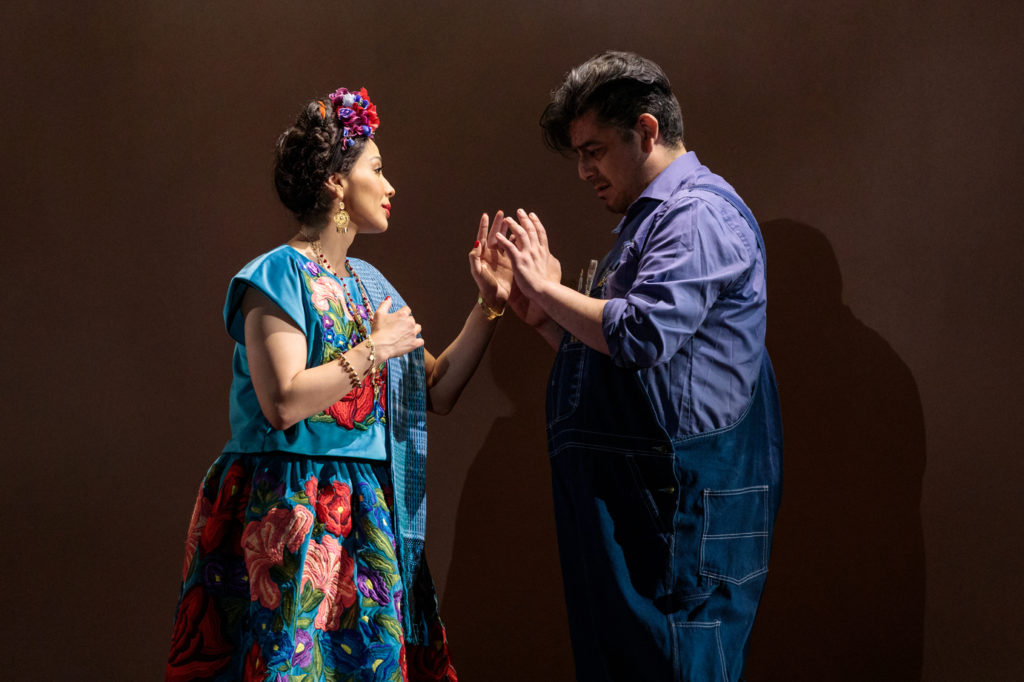 Eloise Kazan’s costumes favored flowing robes for the underworld crowd, and colorful period attire for the folks in the real world. Her bright, contrasting colors for Frida’s dresses stood out majestically.

El último sueño de Frida y Diego follows in the great tradition of mythological operas such as Oedipus Rex, Orfeo ed Euridice, and Medea, except that its title characters are actual historical individuals whose lives have acquired mythological status in contemporary culture. Frank and Cruz have fashioned the mythology of Kahlo and Rivera into a fascinating opera, and San Diego Opera has turned their vision into a bold production. San Francisco audiences will have to wait to experience El último sueño in June, 2023, at their War Memorial Opera House, but San Diegans have three more chances to attend San Diego Opera’s production: November 1, November 4, and November 6 at the Civic Theatre.