Bob Fosse loved his fellow dancers, and the 20-member company of “Bob Fosse’s Dancin’,” premiering at the Old Globe Theatre, does the legendary choreographer proud. Lithe, powerful, and possessed of stratospheric levels of stamina, these dancers ignite the stage. 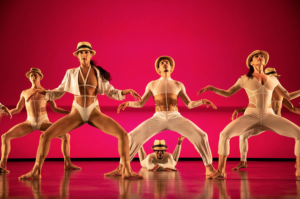 The show is built on the structure of “Dancin'”, Fosse’s pioneering plotless musical that opened on Broadway in 1978, ran for nearly 1800 performances, and gained Fosse one of his eight Tony Awards. In this new production, director Wayne Cilento combines elements of the original “Dancin'” with numbers from other Fosse hits like “Sweet Charity” and “Pippin.”

Cilento danced in the original and has since built his own Tony-worthy choreographic career, and the show feels true to the legacy of Fosse (who died in 1987) in its raunchy fun, manic energy, and of course signature isolations, hip rolls, swiveling knees, and dramatically canted torsos. Robert Brill’s set, high scaffolding that can be wheeled on and offstage, seems a fitting metaphor for the scaffolding of Fosse’s choreographic language … and the Broadway ambitions of this production. 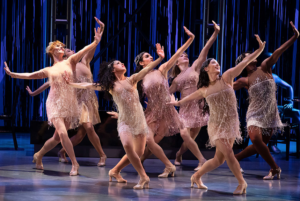 Though billed as plotless, the show proceeds via light story lines created by Cilento and writer Kirsten Childs. The stories are a mixed bag. A scene in a swanky night club—to “Sing, Sing, Sing,” played exuberantly by the 14-member orchestra, with the drummer center-stage—is a delight. Costumers Reid Bartelme and Harriet Jung put the women in sparkly flapper dresses for Fosse’s signature Erté moves. And there’s a phrase where the dancers jump, kicking one leg forward, then land and throw their torsos back that feels like pure joy.

Other sections, like “Big City Mime,” about a hick encountering the temptations of big bad New York, feel like jokes that go on and on, and they weren’t very funny to begin with. Not even classic songs like “Big Spender” and “Let Me Entertain You” can overcome the cliches. And efforts to reflect 2022 sensibilities seem formulaic—for instance, in “America?” where the dancers spread across the stage and one at a time step forward making comments like: “How can we dismantle oppression?” A vital question, but here, with Finn Ross’s video of a succession of US presidents on the 30-foot video wall, it feels forced. 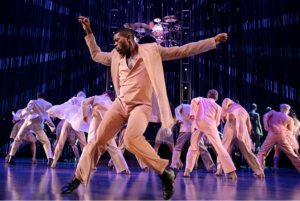 Jōvan Dansberry with the cast of Bob Fosse’s Dancin’. Photo by Julieta Cervantes.

On the other hand, who cares when you can see magnificent young dancers giving their all? In true Fosse fashion, they come across as unique individuals. Ioana Alfonso brings delicious flirty sass to a monologue about dancers as instruments. Yeman Brown glides with big, slow strides as the spirit of Bill Bojangles Robinson—augmented by Ross’s video of the great tap dancer. Kolton Krause steals scenes with a striking androgynous presence and exquisite lines. Ida Saki may have the world’s most nimble feet. On “Life Is Just a Bowl of Cherries,” Khori Michelle Petinaud shows powerful vocal chops.

For those who enjoy a touch of dance history, look for Saki, Karli Dinardo, and Mattie Love posing like the three muses in Balanchine’s “Apollo” (in a vertical line, each woman with her back leg extended at a different height). And Brown, Jovan Dansberry, and Manuel Herrera have fun with an acrobatic funk.

At a run time of about two-and-a-half hours, “Bob Fosse’s Dancin'” could use some tightening. Maybe a tad less plot?

The show runs through May 29. And in case you feel like learning some Fosse moves, check this video.