Does life suck? Playwright Aaron Posner thinks it does. And, as he has done before, he turns to Anton Chekov for support, as Chekov made a career of making melancholy funny. Chekov deserves lush, and Old Town’s Cygnet Theatre has given Life Sucks a lush production for its regional premiere.

Cygnet’s done this once before, with Mr. Posner’s Stupid F**king Bird, a take-off of The Seagull, which Cygnet Associate Artistic Director Rob Lufty also helmed. This time, though, they’re going for the big one: Uncle Vanya.

Of course, Vanya has served as source material for any number of authors, most recently Christopher Durang’s play, Vanya and Sonia and Masha and Spike, which The Old Globe produced here in 2014. My favorite is a film version titled “Vanya on 42nd Street,” created by Wallace Shawn and Andre Gregory of “My Dinner with Andre” fame. 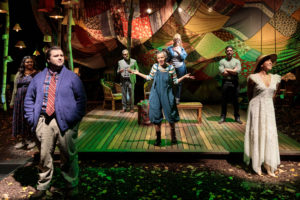 The Cast
Photos by Karli Cadel

To Mr. Posner’s play, though: he keeps Checkov’s basic situation but streamlines the number of characters from nine to seven. Some are familiar: Vanya (MJ Sieber), who wants love and worries that he is too old for it, Sonya (Savanna Padilla), who has similar longings but who understands that she is not pretty, Dr. Aster (Jorge Rodriguez), Vanya’s very handsome buddy, The Professor (Frank DiPalermo), who’s on his third wife and who, like many professors, can easily become pompous, Ella (Emily Shackelford), who is the object of every male’s desire and every female’s despair, and two characters without correlates in the original play: Babs (Patty Gallagher) and Pickles (Beatrice Basso), each of whom have talents to display.

Mr. Posner also tends to emphasize the philosophical underpinnings of the basic question, “Does Life suck?” He focuses on both on ontology, or “Who am I, what is my essence?´and epistemology, or “How do I know what I know?” These can be weighty matters, but Mr. Posner turns them into jokes: there’s one book title mentioned in jest – it contains the words “semiotics” and “praxis.” I’d bet that I was the only audience member on opening night who actually knew what the book was about. It was funny anyway. 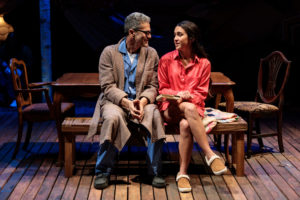 As are the various navel-gazing monologues that each cast member recites. Some of them are also done in the form of group brainstorming, such as “Things I Hate” and “Things I Love.” At times during the four-act play (yes, you heard that right), the actors get the audience involved in the brain teasers. And they do so in both the center and fringes of a gorgeous set, designed by Yi-Chien Lee, lit by Minjoo Kim, with lovely costumes designed by Shirley Pierson, Wigs, hair, and makeup designed by Peter Herman, and sound designed by Steven Leffue.

I’m making all of this sound much more pedantic than it actually is, under Mr. Lufty’s sharp and crisp direction. Yes, there are four acts with an intermission between Acts 2 and 3, but the humor is so solid that time passes quickly and the jokes can be recognized for their serious purpose.

Which is, of course, ultimately determining whether Life sucks, which it definitely does, at least some of the time. The fact that life sucks is what makes it worthwhile, however, and laughing at its sucky-ness is, as Chekov clearly knew, part of what makes life both ontologically and epistemologically worthwhile.