Skid Row gets a dash of surprising realism and some capable crooning in San Diego Musical Theatre’s production of Little Shop of Horrors, now playing through October 30.

The story is the same, of course: a botany-loving boy working in a floundering floral shop pitches a new, as-yet-undiscovered fly trap breed as a marketing ploy to help boost sales. His goal is to keep the shop (and only hope for a relationship with his pretty coworker) alive… but, much to his chagrin, the plant turns out to subsist on human blood, and thus “alive” becomes not only the crux of the story, but also deeply ironic. It begs the question: what wouldn’t a person do for love and success? 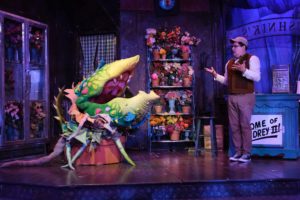 And while this Ashman/Menken show is a time-honored favorite for many (I heard quite a few conversations in the lobby about other productions including the 1986 horror comedy film rendition starring Rick Moranis), it would be a mistake to write off this version of the oft-campy comedy as just another outrageous iteration. Rather, under Kandace Crystal’s direction, SDMT’s Little Shop navigates its way through a more nuanced tale and, in stripping away the exaggerations, seeks to pay homage to the community that it takes place in and the real struggles of its occupants: poverty, physical abuse, class disparities, and more.

This production features a variety of talented actors including standout leads Lena Ceja as Audrey and Ramiro Garcia, Jr. as Seymour. Ceja clearly possesses tremendous control of her vocal mix – her songs ranged from tender to passionate and back again effortlessly – and even her most minute interactions with other characters carried the vestiges of abuse trauma in a way that was devastatingly on point. Garcia’s handling of Seymour and the conflict that the character faces throughout the production was effective; his beautiful vibrato and warm tone were less caricature-esque than iterations past, but again, it worked for a production in which everyone’s rendition was just a hair more rooted in the reality of life as it might have been in a struggling New York neighborhood. 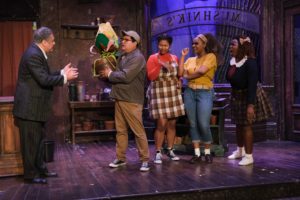 Also keeping energy high were the doo-wop Greek Chorus with Shanyeyah White as Crystal, Carjanae as Ronnette, and understudy Liz B. Williams stepping in for Chiffon, whose fabulous riffs, harmonies, and synchronized choreography kept our toes tapping throughout the production.

Set in the intimate Kearny Mesa theatre space, spooky season seems the perfect time to catch something carnivorous and comedic as Little Shop of Horrors continues at San Diego Musical Theatre through October 30.