The San Diego Symphony’s all-Beethoven program at The Rady Shell on Friday featured two impressive stars. Making his debut on the San Diego podium, conductor Aram Demirjian, Music Director of the Knoxville Symphony, elicited dramatic, incisive performances from the orchestra, and pianist Joyce Yang, a favorite guest artist with the symphony since her debut in the Rachmaninoff Second Piano Concerto with the orchestra in 2016, gave a smashing account of Beethoven’s Pano Concerto No. 1 in C Major. 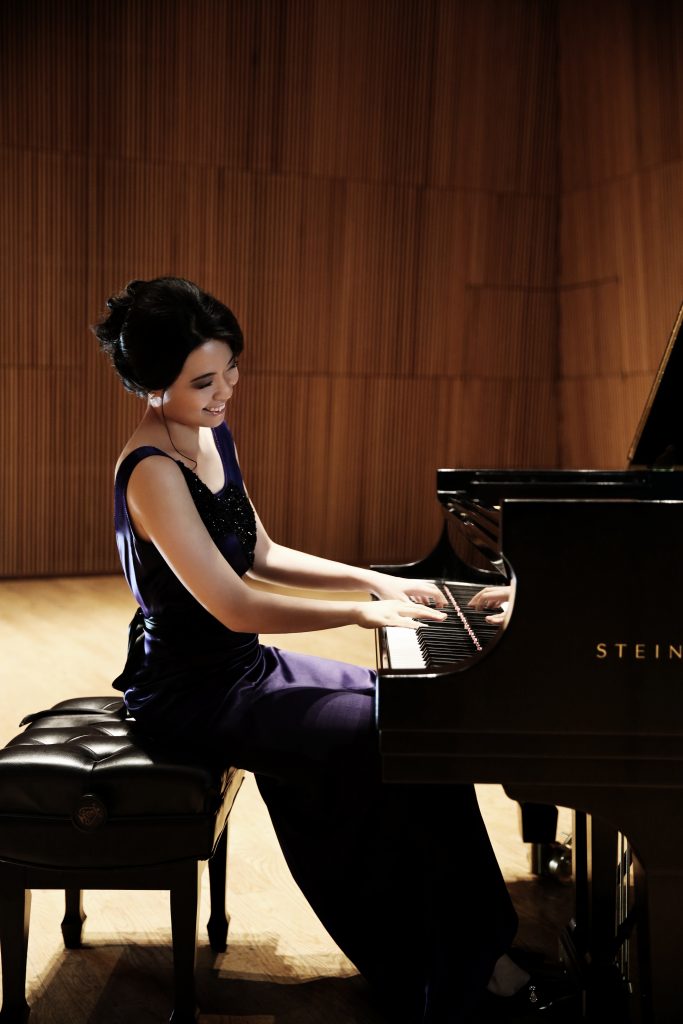 The virtues I found in Yang’s Rachmaninoff performance five years ago certainly applied to her account of this Beethoven Concerto: “beautifully sculpted phrases, the sparkle of cleanly etched filigree in the rapid treble passage-work, and the consistent strength of her playing against the sonic blast of full orchestra.” Of course, the orchestra’s role in the Beethoven First Piano Concerto is less “sonic blast” and more of an athletic ballet with the soloist. And if Friday’s concerto contained a sonic blast, that would have been Yang’s explosive, fiercely articulated first movement cadenza, a dazzling showpiece that amusingly referenced earlier themes between cascadess of brilliant technical display that encompassed the gamut of the keyboard.

No musician joins the elite circle of concert pianists without possessing the vast technical facility that Yang owns in spades, but she offers much more. She suffused the middle movement Largo with a soulful elegance that revealed Beethoven’s hopeful vision of humanity—a vision that found its apotheosis in his crowning Ninth Symphony—that survived in spite of the vicissitudes of the composer’s turbulent life.

Demirjian and the orchestra were clearly on the same page as Yang, giving a sweeping but beautifully proportioned performance, especially in the jubilant Rondo, whose breakneck speed could have been dangerous in lesser hands.

After decades of writing reviews of classical music—my debut review appeared in the San Diego Union in 1978—the listing on a program of two iconic works of the classical repertory fills me with ennui rather than anticipation: J. S. Bach’s Toccata and Fugue in D Minor and Beethoven’s Fifth Symphony. What more can I possibly discover about these beloved but over programmed pieces?

Only minutes into the Fifth Symphony the light dawned. The Rady Shell’s spectacular sound system delivered a more vividly detailed, sonically true revelation of the orchestra than the best seat in the Jacobs Music Center’s Copley Symphony Hall, the orchestra’s home venue since 1986. So the sterling fanfares of Principal Horn Benjamin Jaber and his section, the shimmering solos of Principal Oboe Sarah Skuster, the luster of the violins and violas, as well as the thunder of the cellos and basses registered with startling and welcome definition.

Aram Demirjian took full advantage of the sound system’s acuity with his majestic but rigorously detailed account of the Fifth Symphony. As the orchestra delivered those grand but achingly familiar themes, Demirjian made certain we caught the drama of Beethoven’s strategically placed counter melodies. He gave us the crisp martial beat of the Scherzo while underscoring the movement’s mysterious foreboding. Instead of coasting home on the triumphal themes of the final Allegro, Demirjian maintained meticulous ensemble unity at every dynamic level, making all those incessant repeated chords the hammer that forged the sword of tempered perfection.

Opening the concert with a spirited Creatures of Prometheus Overture only hinted at the glories yet to be revealed on this all-Beethoven extravaganza.

This program was presented by the San Diego Symphony at The Rady Shell at Jacobs Park on San Diego Bay on Friday, August 20, 2021.