Destined for Broadway, San Diego’s Old Globe is staging the World Premiere of “Come Fall In Love” (aka CFIL)…a movie brought to the stage by the same man: author, director Aditya Chopra.  It’s an exuberant, delight-filled celebration of the culture of India, the rush of falling in love and a universal story of young love colliding with tradition. And the most popular Bollywood film ever made according to multiple sources. 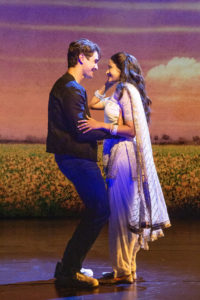 Austin Colby as Roger and Shoba Narayan as Simran in Come Fall in Love
Photo by Jim Cox.

Premiering in October 1995 in India, the movie’s original title “Dilwale Dulhania Le Jayenge”  (दिलवाले दुलहनिए ले जायेंगे) popularly known as “DDLJ” translates to English (according to the captioning on Amazon Prime’s version of the movie) as “The brave of heart always win the bride” remains in first release 27 years later as it has shown continuously in a theater in Mumbai. With a brief intermission due to Covid, the movie returned to the Maratha Mandir Theatre (link to show times) last year in October.

CFIL the Play brings the story to live theater from DDLJ the movie with some omissions and changes to elements director Chopra acknowledges are treasured by fans of the movie, for instance, the final dance and song scene in the play replaces the out-takes shown in the movie and a bloody fight scene gets skipped. However, little of substance from the movie is left out of the play. Original romantic leads in the movie, Shah Rukh Khan as Raj and Kajol as Simran, were catapulted to a new level of fame by the movie. Think Clark Gable and Vivien Leigh in “Gone with the Wind” or Judy Garland in “Wizard of Oz” and Tom Cruise in “Top Gun” – except DDLJ plays to a country of 1.4 billion people even before world-wide exposure.

A large cast of 30 with 48 production staff includes director Aditya Chopra, said by Globe’s Artistic Director Barry Edelstein to be the largest production ever undertaken by The Old Globe. Choreography by Rob Ashford; music by Vishal Dadlani and Sheykhar Ravjiani and dialog and lyrics by Nell Benjamin tell the story through what has become the cliche’ young student trip to Europe to explore the cultural clash of Western versus traditional Hindi ways and the struggle for reconciling the two for those living a culture outside the country of its origin. The key driver being the Hindi tradition of arranged marriage.

In the movie, both lead characters are NRI or “non-resident Indians” raised in Britain while the play uses an American boy played by Austin Colby (who is actually British) named “Rog” (short for Roger but chiming with the Indian idea of “Raj” which was the movie character’s first name) and an NRI girl named Simran raised in America within the Indian diaspora as played by Shoba Narayan. Rog and Simran are classmates in college and her first impression of him is a bad one. They are thrown together when Rog gets invited along on Simran’s dream trip to Europe. While the movie portrayed Simran as a dreamy girl awaiting her true love, the play updates the character to modern “nerd” status as she tries to focus her friends on museums and history. The chemistry between Colby and Narayan dresses up and delivers the transformation most notably of Colby’s character Rog as he chooses, as in the movie, to go to India to try to win over Simran’s father rather than go along with Simran’s idea to elope.

Scenic Design by Derek McLane takes full advantage of the technical capabilities of The Old Globe including a moving train shown with the back of the last car moving while the projection on the back of the stage moves in sync; flowers of the same variety as shown in the opening of the movie on stage melded with a background of a field of the same mustard flower in bloom. Costumes by Linda Cho fill the stage with the silky waves of saris on the women and whirling long shirts (salwar) on the men.

The cast, from the leads to the Ensemble, have excellent voices and look comfortable on stage as if they’ve been doing this play for years. In a bit of flawless improv, actor Irvine Iqbal playing Simran’s father Baldev moves to open a door that first sticks and upon wrenching it open remarks that it “always sticks.” (Readers yet to see the play may watch to see if anyone fixes the door.) Minky (Kate Loprest) and Roger Mandel Sr. (Jeremy Kushnier) play Rog’s divorced parents – she of sharp tongue and expensive tastes while her ex is a man-bunned nerd who made millions. At times, the instrumental music volume threatens to overwhelm the voices, in combination getting unnecessarily loud for this indoor venue. Lighting by Japhy Weideman expertly guides the focus from character to character with subtle spotlights that help sweep the audience along in the story. 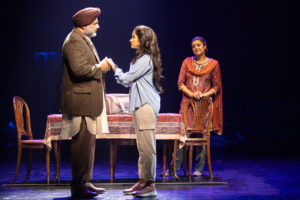 (from left) Irvine Iqbal as Baldev, Shoba Narayan as Simran, and Rupal Pujara as Lajjo in Come Fall in Love
Photo by Jim Cox.

Simran refers to her father as “bauji”, apparently a term of endearment like “daddy” but which at least famed Indian writer Shobhaa De defines as “an old fashioned tyrant” which Baldev embodies for most of the play as the chief representative of Hindi culture.  Simran’s Mom, by name Lajjo, as played by Rupal Pujara carries sympathy for Simran’s wishes while still endeavoring to support her husband but, as in the movie, making a statement of her own independence in her support of Simran.

Throughout the opening night performance, the audience – many clad in traditional Indian clothing – cheered often, sometimes anticipating the action on stage.

True to its title, “Come Fall In Love” will lift your spirits and kindle a deeper love of the theater. Even if you’ve seen the movie, you’ll be glad you attended the play…well, maybe not so much if your daughter is headed for a vacation in Europe…

“Come Fall in Love” plays at the the Old Globe’s Donald and Darlene Shiley Stage through October 16th.