There’s a lot of coincidence in Mansa Ra’s world premiere play, Shutter Sisters. Perhaps too much.

Coincidence is needed to make the play work. Two women, with similar names (Mykal, played by Terry Burrell, and Michael, played by Shana Wride) work as salespeople for the same company, whose product is shutters used as window treatments. They also have a lot more in common, including being adopted as children. 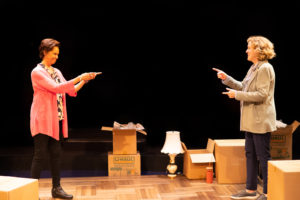 There are noticeable differences between the women as well. Mykal is slender and elegant – she presents as tall, though I’m not sure that’s really the case. Michael is shorter and very friendly. If I were buying shutters, I would find probably spend more than I had planned if I were working with Mykal, because she would appeal to my desire to by stylish. If Michael was my salesperson, I might be more realistic about buying what I could afford. Either one would get the job done, but it would be a different job.

There is also one quality that I’ve left out: Mykal is Black and Michael is White. Normally, I would hesitate to distinguish people by the color of their skin, but in this case it matters.

It seems to matter to Mr. Ra, too. His play presents these coincidences as a means of showing, in particular, how being Black matters.

Approaching the play as a story about how two women manage to meet and in the course of getting to know each other realize that their adoption stories are intertwined. But the play is really about how these women’s lives are different, even though their stories are similar. 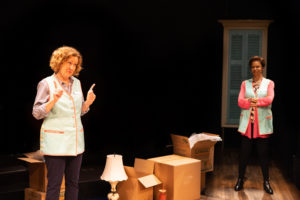 It comes across as a sweet tale, told by two sympathetic characters. I wish that the “really about” part packed more of a punch. By the time I had sat for 90 minutes of a 100-minute play, I was ready for it to end.

None of this is the fault of the production. Director Donya K. Washington is a regular at the Oregon Shakespeare Festival, and her style fits well with how that company works to create an ensemble feel to all that they do. Even with just two actors, Ms. Washington forges them into playing off of each other marvelously. She’s helped, I think, by the fact that the production is in the Sheryl and Harvey White Theatre, where the audience surrounds the playing space. There have to be shutters as part of the scenic design, and the shutters can’t block the audience view. Wilson Chin’s design manages to solve that problem, as well as suggesting the various locales in the play, all as part of the playing space. Kara Harmon’s costume design catch’s each woman’s style and provides clues to their differences. Zach Murphy’s lighting design capably designates playing spaces. Chris Lane’s sound design keeps the audience hearing the actors without being overbearing.

As a reviewer, I like to remember that it would be the rare world premiere that is perfect and needs no improvement. I’d encourage Mr. Ra to make clearer how these women are different – and to cut about ten minutes from the running time.

Performs through November 7 in the Sheryl and Harvey White Theatre, part of the Conrad Prebys Theatre Center, in San Diego’s Balboa Park (1363 Old Globe Way). Performance times are Tuesday, Wednesday, and Sunday nights at 7:00 p.m.; Thursday – Saturday nights at 8:00 p.m.; and Saturday and Sunday matinees at 2:00 p.m. Parking is free in Balboa Park, but there is little parking very close to the Old Globe. If you need valet parking, check with the box office for details. Additional credits: casting by Caparelliotis Casting, and production stage management by Marie Jahelka.