As San Diego’s Upright and Grand Piano Festival pulls into the home stretch, it was fitting to feature a mighty Romantic piano concerto on the San Diego Symphony’s concert at the Jacobs Music Center Friday (January 29). Music Director Jahja Ling has always favored the popular piano concertos by Russian composers—Tchaikovsky, Rachmaninoff, and Prokofiev—but this time he selected Johannes Brahms’ Piano Concerto No. 1 in D Minor, Op. 15. 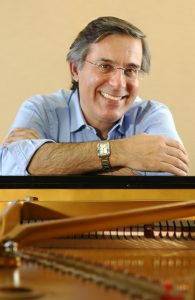 It proved an inspired choice, with Ling and the orchestra boldly complementing guest soloist Arnaldo Cohen’s intuitive, commanding take on this towering concerto of the Romantic canon. According to my records, Cohen last performed in San Diego in December of 2011, a highly successful solo piano recital for the La Jolla Music Society. The Brazilian pianist’s refined, masterful technique realized Brahms’ flamboyant displays with confident assurance, but, more importantly, he portrayed the poetry in the concerto’s reflective forays with soulful insight.

Although the D Minor is Brahms’ youthful piano concerto, we benefited from the maturity of Cohen’s interpretation. After the first movement’s extended, symphonic introduction, which Ling conducted with unrelenting drive and dark determination, the piano’s subdued entry theme can sound underwhelming, but Cohen’s deep touch and resonant sonority gave it the gravitas of the composer’s late Intermezzos. I appreciated that Cohen crafted clear intention into every phrase, and his linear clarity served Brahms’ classically oriented Romantic style well.

Ling underscored the serenity of the Adagio, finding with Cohen a mystical quality the composer’s sober character too rarely portrayed, and they unleashed finale’s assertive rondo with a disciplined vigor that brought the audience instantly to its feet at the final cadence.

Ling chose Beethoven’s Symphony No. 6, the “Pastorale,” to open his program, apparently not wanting to steal any of the Brahms Concerto’s thunder. Especially in the Symphony’s first two movements, the orchestra’s string sections produced that warm, polished sound we associate with the great Central European orchestras, a trait Ling has averred on numerous occasions to be an important goal he hoped to accomplish during his tenure at the San Diego Symphony. This velvet sound, combined with Ling’s joyous, unhurried tempos, allowed these movements to unfold gracefully, replete with noble solos from Principal Flute Rose Lombardo and Principal Bassoon Valentin Martchev. The solid horn section energized the Scherzo, and the first violins and violas reveled in their solo moments in the final movements.

Unlike the other Beethoven symphonies, which end with climactic, dramatic flourishes, the “Pastorale” ends quietly, simply folding up its tent and walking into the sunset. Ling continues to champion this anomaly in the Beethoven symphonic canon, and I can only salute his commitment.