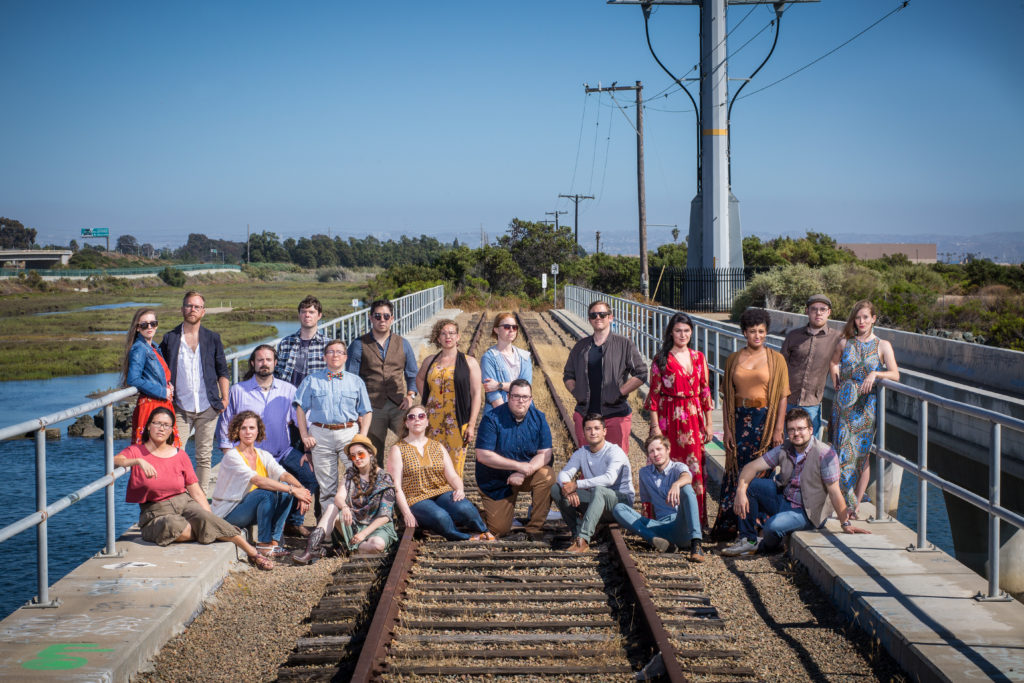 Davis, a Distinguished Professor at UC San Diego and winner of the 2020 Pulitzer Prize for Music, based his a cappella cantata on Robert Hayden’s 1945 poem Middle Passage, a lengthy, graphic account of an early 19th-century mutiny aboard a ship bringing enslaved Africans across the Atlantic to North America. Davis’ aptly austere choral tapestry brought to mind the gravity of a Baroque Passion oratorio, but without its subtext of redemption. Hayden’s chilling Middle Passage narrative may portray the “voyage from death to life” those who survived the journey, but that proved true for only a small percentage of the Africans on that ill-fated ship.

Under the assured direction of Artistic Director Juan Carlos Acosta, the twenty singers of Sacra/Profana navigated Davis’ demanding score with a consistently well-focused, deftly balanced sonority complemented by supple phrasing of the composer’s sympathetic articulation of Hayden’s epic poetry. Davis’ choice of the octatonic mode for his cantata deprived him of the dramatic flourishes that conventional major-minor tonality offers, but a combination of his inventive thematic structures, his consistent close harmonies, and the choir’s buoyant drive more than compensated.

Sacra/Profana will perform Davis’ Voyage from Death to Life Upon These Shores at an upcoming convention of the American Choral Directors Association. Based on Friday’s performance, I predict they will mightily commend both San Diego choral singing  and Anthony Davis’ profound work to this professional gathering

Before Director Ken Anderson brought singers from his Martin Luther King Jr. Community Choir of San Diego to the chancel of St. Mark’s United Methodist Church, he gave a lively historical description of Negro spirituals—as they were originally called—and how they served as a foundation for gospel music, jazz, and the wide array of today’s popular styles. Anderson explained that while the white slave owners thought spirituals were merely benign music, these “sacred” songs were actually filled with instructions on how and when to escape–or at least how to survive while awaiting the possibility of escape. With Anderson’s resonant baritone he referenced several spirituals and gave a commanding account of “Keep Your Hand on the Plow.”

With a select group of 14 singers from his choir, Anderson launched a highly rhythmic, driving a cappella choral arrangement of the spiritual “Glory, Glory, Hallelujah.” Sitting down at the grand piano, Anderson then eased his ensemble into a more easy-going, sweetly lyrical gospel number “Lord, I Will Lift My Eyes to the Hills,”

“Hold on to His Hand,” a fiery, intense gospel anthem featured the splendid solo work of chorus member Dale Flemming, whose gleaming soprano confidently vaulted into the upper edge of the vocal stratosphere. For the choir’s finale, Anderson brought forward another 40 or so members of his choir present in the audience for a triumphant rendition of “Lift Up the Lord, and Praise His Holy Name,” a piece that cleverly quotes riffs from Handel’s “Hallelujah” chorus from that oratorio that nearly everyone knows. Gloriously propelled by Anderson’s fluent gospel piano technique, this gospel anthem crowned the offerings of San Diego’s beloved gospel choir.

As the evening’s fitting benediction, the two directors brought all of their singers together in the St. Mark’s chancel to lead the audience in “We Shall Overcome,” that rallying cry from the Civil Rights protests of the last century. With war breaking out in Eastern Europe, the verse “We shall live in peace some day” took on poignant relevance, and with Anderson at the piano, the hymn unleashed its unfailing holy persuasion.