As a coda to its month-long festival of American music, the San Diego Symphony offered an engaging Charles Ives tribute on Saturday, January 28. Reprising a Beyond the Score(r) multimedia dramatic presentation created by the Chicago Symphony’s Gerard McBurney, the evening’s opening half featured two actors as Charles Ives and his wife Harmony Twitchell reminiscing about the composer’s New England roots and recounting his battles with the musical establishment of his day. 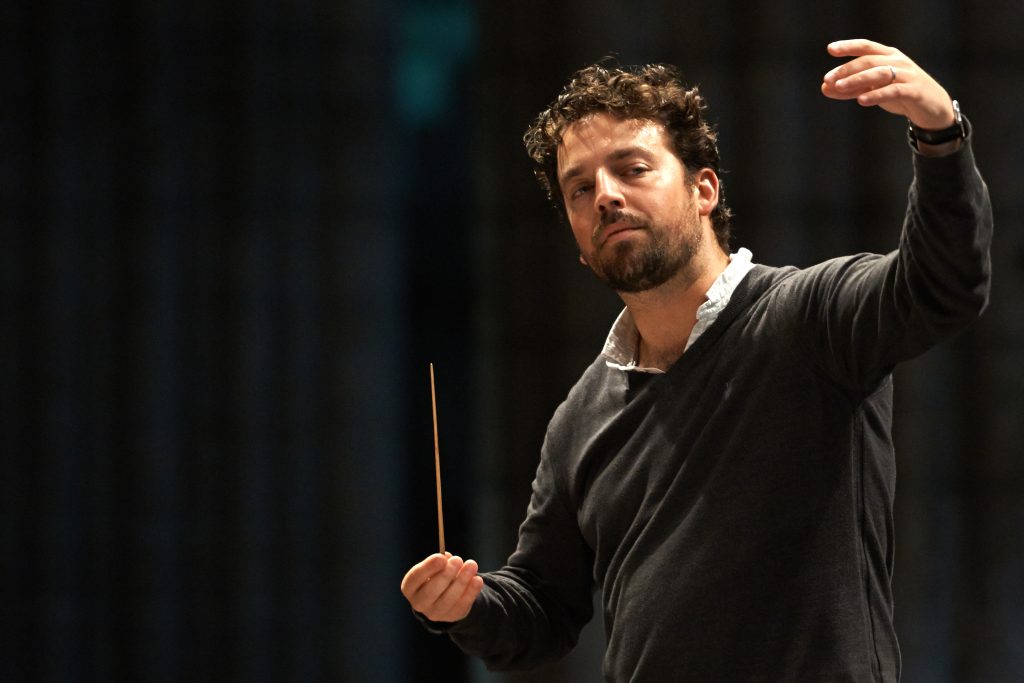 As Roger Mueller used Ives’ own writings to express his savvy and curmudgeonly opinions about music and its role in American life, Jill Shellabarger added those biographical details about Ives that would have sounded boastful coming from the composer himself. As they conversed while seated in large wicker chairs placed at the edge of the Copley Symphony Hall stage, guest conductor James Gaffigan led the orchestra in short excerpts of Ives’ music and other classical orchestral gems that inspired him. And a quartet of hearty vocalists from SACRA/PROFANA interspersed hymns, patriotic songs, and popular ballads by Stephen Foster to capture the vernacular music that provided Ives much of his inspiration.

On the large screens above the orchestra, we saw historical photos from the late 19th century: e.g., Ives’ hometown of Danbury, Connecticut; his father’s civic brass band; community gatherings, and the elaborate first pages of popular sheet music of the time. We even heard a rare recording from the 1930s of Ives playing and singing, in a rather rough, croaking voice, one of his own songs. All of these elements made a charming and illuminating montage, although McBurney made no attempt to explain Ives’ major paradox: how someone who wrote complex and edgy, dissonant music could hold such deep admiration for the hymns of Lowell Mason and the songs of Stephen Foster. From a contemporary vantage point, the music of Mason and Foster sounds melodically and harmonically naïve, almost banal.

Paradoxes aside, after intermission Gaffigan and the orchestra returned to perform Ives’ Symphony No. 2, a major work Ives labored over from 1897 to 1909, although it was not given a complete performance until Leonard Bernstein and the New York Philharmonic premiered it in 1951. As the San Diego Symphony demonstrated on the previous evening’s concert—a generous but completely different slate of American music—the players responded enthusiastically to Gaffigan’s athletic, sharply focused direction. From the string sections’ deftly balanced, mellow counterpoint that opened the first movement to the work’s concluding brash, dissonant full orchestra chord, the orchestra gave a sympathetic, cogent account of the Second Symphony.

Among the delights on this performance: Principal Oboe Sarah Skuster’s sweet solo that linked the first and second movements; the sunny brass choir intoning the hymn “Bringing in the Sheaves” in the second movement; Associate Principal Cello Chia-Ling Chen’s refined, gently arched solo in the third movement; and the trombones’ muscular “Columbia, the Gem of the Ocean” that bumptiously interrupted the lithe scherzo spirit of the finale.

The amazing amount of music the orchestra had prepared in the four programs of the last two weeks of the festival took a slight toll on the Ives’ Second. It is a long symphony, and I found some of the phrasing on the generic side, a situation that more rehearsal time would have easily remedied. But I am thankful for the rewarding scope of music covered in this American music festival, from Andrew Norman’s 2014 Piano Concerto, to other important recent works such as John Adams’ “City Noir” and Steven Stuckey’s “Rhapsodies.” Rarely programmed works from the early decades of the last century—Ives’ Second Symphony, Copland’s Piano Concerto, and Samuel Barber’s Symphony No. 1—shed light on the vitality of American symphonic music as it came into its own.

A concert of west coast jazz and several popular artists, programs I was not able to cover, completed this festival’s expansive, probing offerings. I can recall the bad old days. When faced with filling the January gap in the subscription season, a former music director would throw together a Beethoven or Tchaikovsky festival on the grounds that “they are the most popular composers with symphony audiences.”

I welcome these good new days!

[themify_box style=”shadow” ]This concert by the San Diego Symphony was performed on Saturday, January 28, 2017, in the Jacobs Music Center’s Copley Symphony Hall in downtown San Diego. The season continues with Music Director Jahja Ling conducting the orchestra on Friday, February 3, 2017, in the same venue.[/themify_box]