You have to have a lot of pluck to keep going as a theatre company right now. It still isn’t considered safe to sit inside in the dark, watching actors inevitably spew forth aerosol that we used to take for granted as safe. The solution, other than performing outside, is to produce recorded versions of your productions. It’s not ideal: so much better to be part of a packed house while a talented cast and creative team create theatre magic.

Orange County’s Chance Theater has created a lot of magic in its twenty-two years of operation, so much so that it’s worth a San Diegan’s attention to what the company is up to. In this case, it’s a two-person musical titled The Story of My Life. In Chance’s hands, a sweet and subtle story of friendship becomes a soaring affirmation of the power of love. 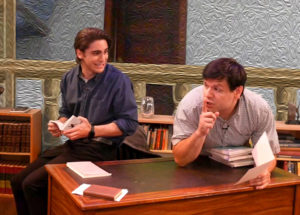 Neil Bartram (music and lyrics) and Brian Hill’s (book) 90-minute gem might be dubbed “chamber Sondheim.” It’s plot isn’t complex, but it does rely on the subtle dynamics of the friendship of two boys who bond in first grade and who remain friends into adulthood. They are alike in their love for the movie, “It’s a Wonderful Life,” but different in other ways. Thomas (Dillon Klena) is a handsome golden boy, whose career as a writer takes off. Alvin (Wyn Moreno) hangs in the background, works in his father’s bookstore, and eventually takes it over. 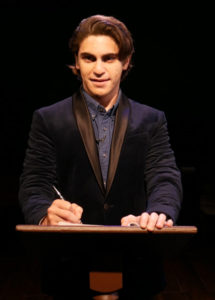 Alvin and Thomas were inseparable growing up, and Thomas goes out of his way to stay in touch with his friend after he’s had success (though, truth be told, Thomas has come down with a major case of writer’s block). As the play begins, he’s made one last trip to his childhood home, to give the eulogy at Alvin’s funeral, and his writer’s block kicks in big time. Alvin visits Thomas as he’s about to speak to the waiting mourners and helps him find what to say by going through a series of stories that they “composed” as their friendship developed.

What makes the show work is Mr. Bartram’s songs, which probe how boyhood friendship can blossom into adult love. Under Matthew McCray’s direction, Mr. Klena and Mr. Moreno eschew melodrama, keeping the characters’ emotions honest. Mutual respect rules the day, both in the actors’ performances and in Mr. Hill’s writing of the characters. Both actors sing with grace and feeling, under Robyn Manion’s sensitive musical direction. 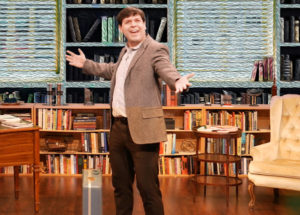 How lovely it would have been to experience this heartfelt effort with a live audience. Chance does its best to simulate that experience, and it works to a degree, with Bradley Kaye’s elaborate video backgrounds creating a world of books for Thomas and Alvin to live in. That world is well lit by Masako Tobaru, the Air Play cast to my television produced a picture that came close to being in the theatre. Unfortunately, Ryan Brodkin’s sound design often resulted in the accompaniment overshadowing the singing, and James Tran’s video editing had more than a couple of continuity problems.

Despite these difficulties, The Story of My Life is worth seeing for the songs and the honest portrayals. You might even shed a tear for the childhood friendship that didn’t last the way Thomas and Alvin’s did.

Performs only at set times: Fridays and Saturdays at 7pm and Sundays at 2pm, through June 6, 2021. Tickets ($25-$49) may be purchased at www.ChanceTheater.com or by calling (888) 455-4212. Audience members will receive an email that allows the show to be streamed using the ShowTix4U platform. The stream can be cast to home televisions relatively easily. Other creative team members are wardrobe coordinator Erika C. Miller, props coordinator Bebe Herrera, and Stage Manager Nicole Schlitt.