Slowly, carefully, theatre is beginning to be produced in the pandemic age. The companies that are blessed with outdoor spaces are using those for now, hedging their bets that they can move inside in the fall. Smaller companies are either continuing with recorded work or are dipping their toes into indoor production.

Among the smaller companies that have decided not just to dip but to plunge is Anaheim’s Chance Theater. The Chance community is extremely supportive – and they have every right to be so. Chance is known for taking risks and producing little known works with verve.

That’s the formula the company is following now with Edges, a song cycle that Benj Pasek and Justin Paul (of Dear Evan Hansen and The Greatest Showman fame) wrote when they were students at the University of Michigan. Under James Michael McHale’s stage direction and Robyn Manion’s musical direction, the company provides a pleasant 80 minutes of theatre music for those of us who are starved for our theatre fix. 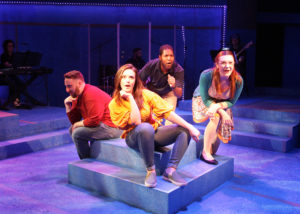 A four-person company (Sarah Pierce as Woman #1, Elizabeth Curtin as Woman #2, Jewell Holloway as Man #1, and Tyler Marshall as Man #2) trade off performing numbers that are sometimes buoyant, sometimes introspective, sometimes angry, many times hopeful. I didn’t discern a storyline, and while there were a few duets and a couple of group numbers, the majority of the selections are solo pieces.

The lyrics are worth the listen, and I’d bet that they’ve been revised over the years, because many demonstrate a perspective that college students aren’t likely to have. Here’s a sample, from a song called “Lying There:”

I look at you lying there sleeping so soundly
Sometimes I wish I could sleep as well as you
And I bet in your dreaming I’m there
I look peaceful
And maybe you’d assume
I’m lost in dreaming too. 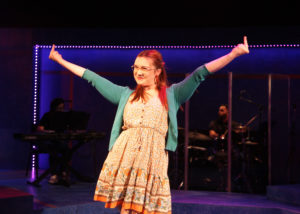 Of course, a show such as this one is entirely dependent on how the performers sell the songs, and here there’s some variation in quality. Mr. Marshall is clearly the class act of this group. His lyric tenor easily cuts through the three-piece, on-stage, band, and his intelligent approach to the music projects a warm and welcoming quality that can easily maneuver into other personae as desired. Ms. Curtin has a wide-ranging voice for a mezzo, and she showed off her rich tone to advantage in the aforementioned “Lying There” and in “Better,” a duet with Mr. Marshall. The other two singers did not fare as well. Ms. Pierce resorted to belting, especially early on, something I don’t admire in a small space such as this one. She was also saddled with more than one angry song which made her soprano sound screechy. Mr. Holloway had less to do than the others, and while I appreciated his ability to blend his baritone with the others in the group numbers, he struggled with interpretive style in his solo numbers.

It’s not considered kosher to review the audience, but I do have to say that the excitement of the Chance regulars, including major donors, was palpable and lent a sense of occasion to the proceedings.

Chance’s work is usually reliable, and the company proves the point in this return to live production. If the material and the format attracts you, you’re not likely to be disappointed with Edges.

Performs Thursdays at 7:30pm, Fridays at 8pm, Saturdays at 3 and 8pm, and Sundays at 3pm through August 8, 2021. Fully vaccinated performances are Saturday, July 25 at 3pm, Sunday, August 1 at 3pm, and Saturday, August 7, at 8pm. Proof of vaccination and photo id are required when purchasing tickets for these performances. Face covering required for other performances. Tickets ($39-$49) must be purchased in advance; no walk-up sales will be made. Chance Theater is located at 5522 E. La Palma Avenue, Anaheim, CA 92807.