Over his 55 years of performing, the violinist Pinchas Zukerman has acquired one of the most prized reputations in the world of classical music. But a great reputation does not guarantee a great performance. 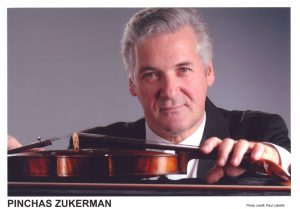 With his Zukerman Piano Trio, the acclaimed violinist presented a surprisingly lackluster program on Tuesday (August 9) for La Jolla SummerFest 2016. Even on paper, “An Evening with the Zukerman Trio” did not appear promising: the Felix Mendelssohn D Minor Piano Trio and Antonín Dvořák’s “Dumky” Piano Trio—two of the most over programmed piano trios—and two lighter works by Brahms and Glière.

Throughout the evening, Zukerman maintained a fastidious neutrality, every note in its proper place, but little engaged communication or conviction that each piece had something vital to say. It proved a very long two hours in Sherwood Auditorium. I cannot accuse his partners of the same ennui, however, especially pianist Angela Cheng, who brought great urgency to the demanding piano part of the Mendelssohn Piano Trio. Whether brilliant figurations or subtle, cantabile melodies, her muscular yet pliant touch brought all of these aspects into clear focus with riveting flair. During Mendelssohn’s captivating Scherzo, the one time during the concert I felt some electricity in the air, it was Cheng’s panache that ignited the other performers.

Dvořák’s “Dumky” Piano Trio offers myriad opportunities for the cellist to shine, and Amanda Forsyth fulfilled them with stylish allure. Her forte in this piece was shaping the composer’s more expansive, soulful themes with just the right amount of Middle European melancholy. She displayed a slightly unusual cello sound, a bright edge supported by a modest proportion of fundamental, so it was not a particularly robust solo cello sound. But once my ear had become accustomed this color, I was able to enjoy her affinity to Dvorak’s idiom without distraction.

I admit that I had not previously encountered Reinhold Glière’s set of Duets for Violin and Cello, Op. 39, but once Zukerman and Forsyth launched into these breezy bagatelles, I understood why. While these exercises no doubt amused the performers, these coy duets were not intended to be concert fare. Unlike Zoltán Kodály’s shattering Duo for violin and cello, Op. 7, Glière’s Duets offered little reward to the eager listener. I think it is safe to say that the audiences that attend SummerFest expect more than elegant amusement from performers.

Johannes Brahms’ short Scherzo in C Minor for Violin and Piano, a very early work the composer chose not to publish, opened the concert. This was the only time pianist Cheng overpowered her musical colleagues, but the piece was finished in a few minutes, so the discomfort was minor.

[themify_box style=”shadow” ]This concert was given on Tuesday, August 9, 2016, at the San Diego Museum of Contemporary Art’s Sherwood Auditorium. The La Jolla Music Society’s SummerFest 2016 continues in that venue through Friday, August 26, 2017.[/themify_box]