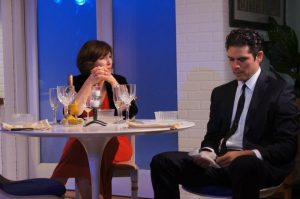 ion Theatre’s Claudio Raygoza has created Julia, a world premiere version of August Strindberg’s Miss Julie.  His creation contains a cup of its original author, two cups of Tennessee Williams, and a pinch of Mexican telenovelas. And, in his title character he’s given company stalwart Catalina Maynard a bitch-goddess role worthy of her considerable talents.

Strindberg’s 1888 naturalistic classic explored power, class and gender roles in Swedish society, and Julia sets those themes in 1970s San Diego.  There, Julia (Ms. Maynard), the wife of a prominent Mexican politician, visits our fair city on a shopping trip.  She’s met at the airport by Jacob (Jorge Rodriguez), the politician’s driver, and after shopping she’s taken to the high-rise apartment her husband maintains for visits to the area.  At the apartment, Cristal (Anyelid Meneses) is waiting to serve dinner, a complicated recipe for rabbit taken from another Julia (Child’s) cookbook. The dinner is all the harder to pull off because there have been sporadic power failures throughout the day.

It quickly becomes clear that tension is in the air.  Julia suspects that her husband is also in town, visiting a mistress, and Jacob and Cristal are both on edge.  Besides working for a powerful man, Jacob is a literature student at UCSD, and he is worried about caring for Cristal, who is recently arrived and doesn’t speak English fluently.

Most of these details parallel the original Strindberg (and local Strindberg expert A. C. Harvey is credited as dramaturgical adviser).  But, the play’s hothouse environment seems as reminiscent of the great plays of Tennessee Williams, if not more so.  Williams often featured a strong woman as his central character, paired with a younger man who oozed sexual energy. This formula allowed Williams to create some of the great women’s roles of the American theatre, such as Blanche DuBois, Amanda Wingfield, and Maggie the Cat.

I’m not ready to pronounce Julia’s title character in that league, but Ms. Maynard makes a persuasive case for doing so.  Her performance borders on overbearing, but it also contains enough vulnerability to leaven the dough she’s kneading. Beautifully modulating power and seduction, her performance dominates for about two-thirds of the play’s length.

Eventually, though, the role-playing games break down and truths are told.  It becomes clear that Cristal is nervous about more than her station in the household and her difficulties with English.  These later scenes need skilled acting, and Ms. Meneses, a novice performer, isn’t completely up to the task. Neither, for that matter, is Mr. Rodriguez, though he generates plenty of sexual heat, and he’s able to put some nuance into the mood and power swings that characterize the play’s final moments. 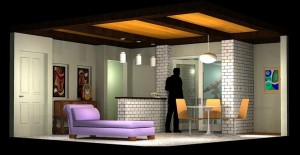 The best work at ion, I’ve found, comes when the performances draw in audiences with their intimacy. Under Mr. Raygoza’s direction, Julia does so with a fair amount of skill.  Brian Redfern’s 70s high-rise apartment combines the look and feel of the era with a highly effective use of ion’s limited stage space. The uncredited costume design adds the pinch of telenovela with its sexualized styles. Karen Fliljan’s lighting, Andrea Fields’ properties, and James Dirks’ sound all feel right.

Julia is ion’s 50th production, and its fifth world premiere. The company recently acquired the adjacent building (and, be sure to visit the handsome new URBN CNTR 4THE ARTS before or after the show). Its specialty has evolved into encouraging sophistication in local theatre audiences through the production of edgy work, and even if Julia never plays outside of San Diego it will have served that function admirably.