The main issues that roil the plot of Hansol Jung’s searing play Cardboard Piano include forgiveness and redemption, life and death, race and colonialism, love and hate, faith and doubt, with a heavy dash of homophobia. And—let’s be clear about this—these are just the main themes of the play that made such an impact at Louisville’s 2016 Humana Festival of New American Plays. 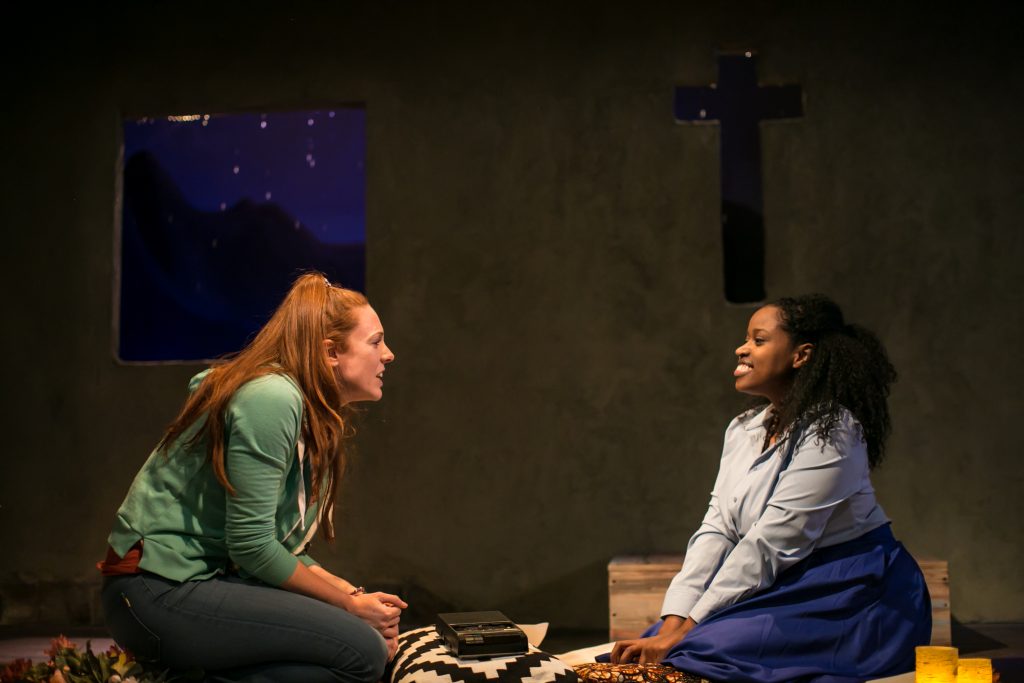 Diversionary Theatre’s no holds barred production of Cardboard Piano opened Saturday, February 3, sporting a powerful cast of four actors tautly directed by Jacole Kitchen. South Korean playwright Jung has fashioned a rather baroque story of Christine, an 18-year-old daughter of American Christian missionaries stationed in Uganda, who falls in love with Adiel, an African woman of her same age. Late on New Year’s Eve of 2000, the two young women declare their love in a clandestine wedding service of their own devising in the mission’s chapel, after which the American proposes the “newlyweds” escape to Tunisia to escape potential discovery and the consequent wrath of both Christine’s parents and Adiel’s fellow villagers.

Before this unlikely getaway can be executed, however, Pika, a gun-toting 13-year-old runaway soldier from a marauding insurgent army, breaks in on the couple. Violence ensues, even after the women aid Pika by attending to his wounds and momentarily sheltering him from his avenging commander. But the play’s emotional firepower is reserved for the second act, when Christine returns to Uganda 14 years later to inter her father’s ashes in the mission church his family founded but left in 2000.

She finds a native pastor, Paul, with a young wife, Ruth, leading a small congregation in the same chapel that Christine and her parents constructed years before. As the second act opens, Paul is rehearsing his upcoming Sunday sermon based on Jesus’ well-known parable of the Good Samaritan. Pastor Paul reminds the play’s audience members—who become proxies for his Sunday congregants—that the point of the parable is not to encourage people to be charitable and to help those in need, but rather to answer the question, “Who is my neighbor?” This question is also one of the playwright’s underlying questions, and she suggests that some acts are so terrible that they permanently rend the fabric of neighborly relations, that the price of forgiveness may be too steep for the injured parties.

Andréa Agosto brought exuberant confidence to Adiel, giving the young woman an inner certainty both admirable and rare among 18-year-olds. Agosto invested those same traits in Ruth, adding a caustic, realistic perspective to this more mature character that allowed her to regularly check her husband’s grandiosity. As Christine, Kate Rose Reynolds frosted her giddy all-American self-confidence with the apt icing of entitlement. 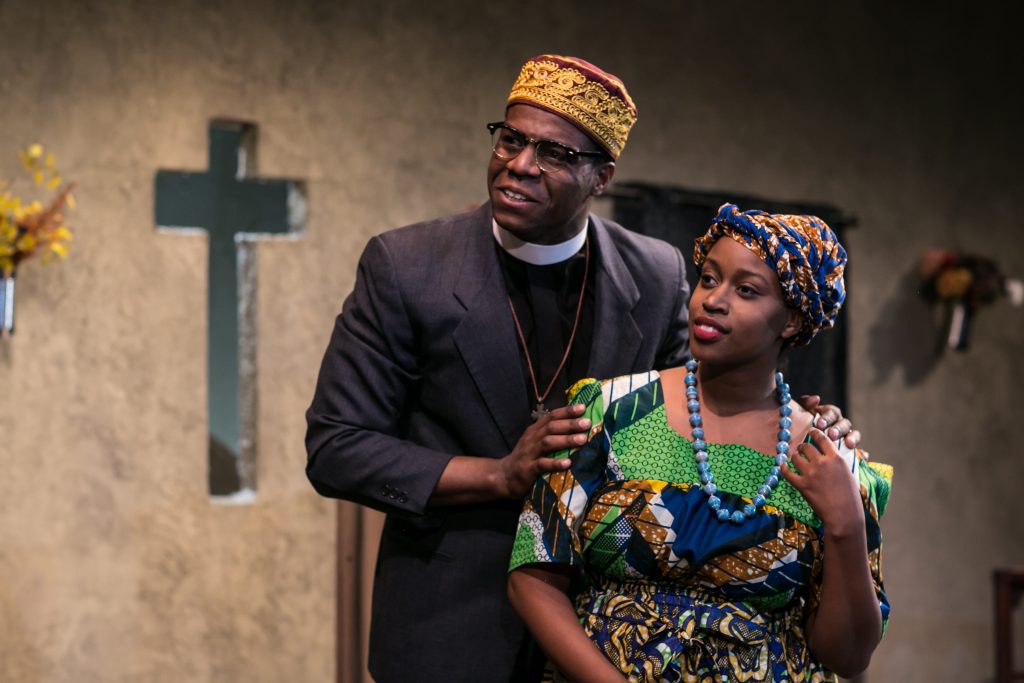 In the pivotal role of Paul, Wrekless Watson captured the assured bravado of successful Protestant preachers, yet skillfully tore down that façade brick by brick as Jung’s plot unearthed his sordid life before receiving the call to ministry. In the first act, Watson’s commanding officer burst onto the scene with requisite snarl and menace. 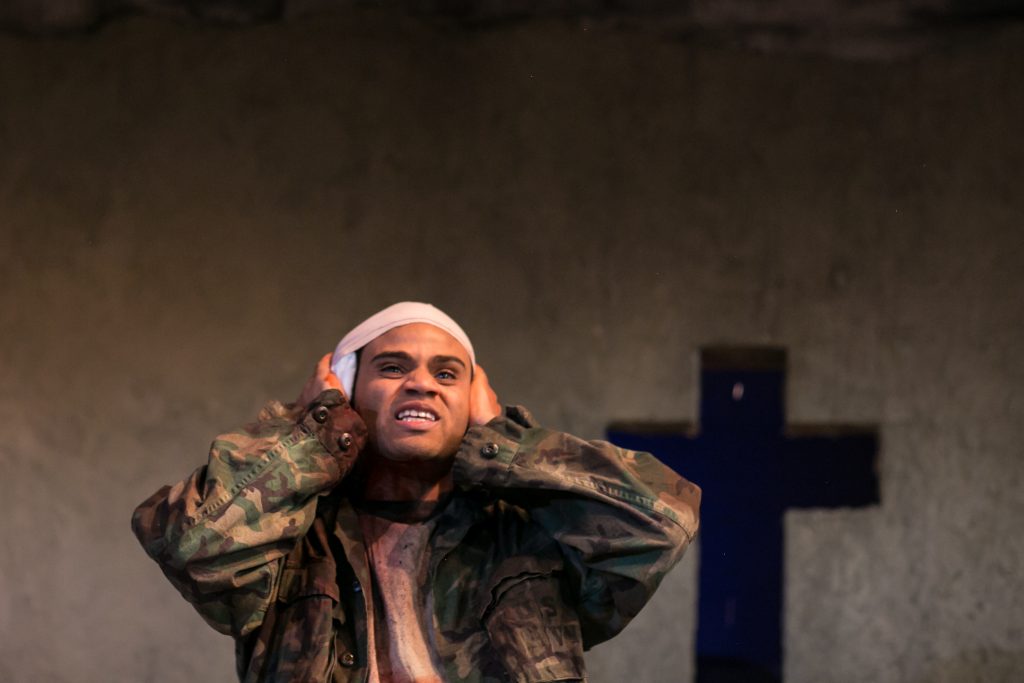 John Wells III gave ample necessary credibility to young Pika, simultaneously arousing our sympathy for the child who was commandeered at age 10 to enact unspeakable guerilla crimes against humanity, while allowing us to feel both his and our revulsion for committing these acts, a few of which were described in painful detail.

Wells did what he could with the underwritten second-act role of Francis, a gay youth whom Pastor Paul wants to expel from the village.

In overall vibrant pacing and in the actors’ highly articulate speech, Director Jacole Kitchen maintained an unrelenting sense of both physical and psychological danger, the significant lens through which the playwright would have us approach her well-crafted situations. Kristen E. Flores’ unit set worked comfortably in its unadorned simplicity as the first act mission chapel and even better for the indigenous chapel of the second act, colorfully adorned with African art and handicrafts.

The vivid hues and patterns of Jennifer Brawn Gittings’ costumes proved a constant delight to the eye and clearly identified the African location of the drama. Curtis Mueller’s lighting and Haley Wolf’s sound design proved spectacular in the first scene’s chillingly realistic rainstorm and crashing thunder. I should add that the singing of the confessional Protestant hymn “Just As I Am, Without One Plea” that framed the play seemed a bit obvious the first time around, but, at the end, it made telling emotional and theological impact.