Sunday’s program at the Museum of Photographic Arts, a tempting buffet of stylish, jazz-inflected bossa nova selections, demonstrated again the laudable versatility of Camarada. A varied collective of many of San Diego’s most skilled performers, Beth Ross Buckley’s Camarada has consistently delivered the goods for the last 25 seasons, whether the fare has been standard repertory classical chamber music, challenging contemporary compositions, jazz, dance, or the music of Latin America. 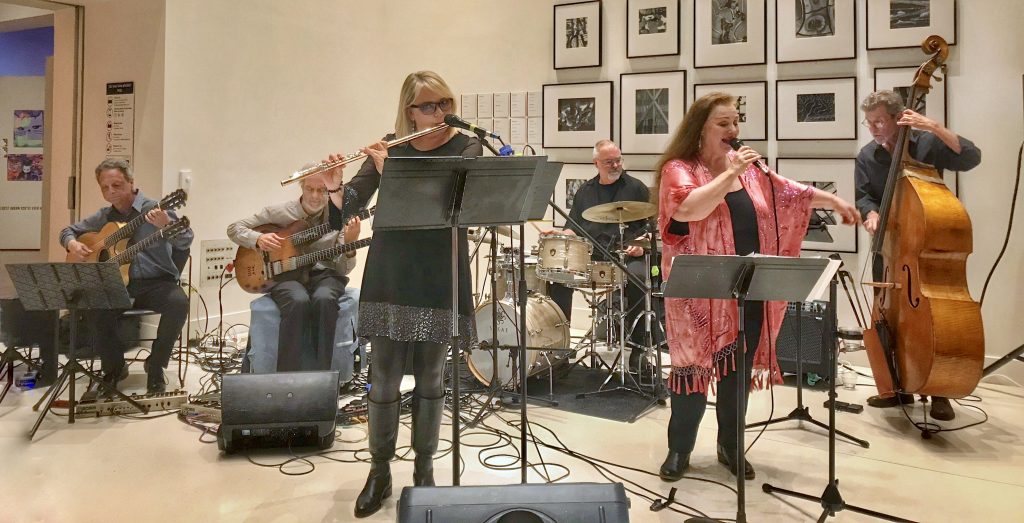 Beating everyone else to the punch for a salute to Valentine’s Day, Camarada’s theme boasted “The Look of Love,” and not surprisingly featured Burt Bacharach’s familiar ballad of that title early in the concert. The opening salvo that set the program’s stylistic focus, however, was Antônio Carlos Jobim’s “A Felicidade,” the song he wrote for the classic 1958 French film Black Orpheus. A five-member instrumental ensemble headed by arranger and guitarist Peter Sprague along with guest vocalist Coral MacFarland Thuet gave a spirited, sophisticated account of Jobim’s tune, with ample elaborate solos for flutist Buckley and guitarists Sprague and Fred Benedetti.

We also heard two of Sprague’s own compositions, “Fruta Madura” and a new piece, “Believe in Me,” which opened with a novel touch–an extended percussion solo, tastefully rendered by Duncan Moore. (And just to be clear: I have never found Moore’s touch at the drum kit to be anything but tasteful.) The contemporary pop style of “Believe in Me,” active, engaging instrumental lines with less bracing, conversational vocal lines, complemented the evening’s bossa nova style without imitating it in any way.

Vocalist Thuet’s fluent Portuguese carried her through the Brazilian songs with laudable panache, and her ease with its relaxed vocal style proved winning. Her creamy mezzo struck me as a bit monochromatic, and a wider dynamic range would have better suited the assertive playing of her instrumental colleagues.

Sprague explained that his arrangements of two Beatles songs,  “The Fool on the Hill” and “Norwegian Wood,” were inspired by arrangements made by Sérgio Mendes, and although they fit the program theme, I an not willing to say they improved on the originals.

This concert was presented by Camarada on February 2, 2020, at the  Museum of Photographic Arts in San Diego’s Balboa Park. The next Camarada program in the series held at this venue is slated for April 26, 2020.