Nonpareil bassist and Buenos Aires native Martin assured the group’s stylistic authenticity, supplying three of his own compositions to the program as well as arranging most of the other tangos for this ensemble of flute, piano, violin, bass, and percussion. Fleet dancers Carolina Jaurena and Juan Alessandrini added their bravura tango interpretations to half of the tangos on the program, giving expression to tango’s heightened sensual character that makes it stand out among the cornucopia of national dances. 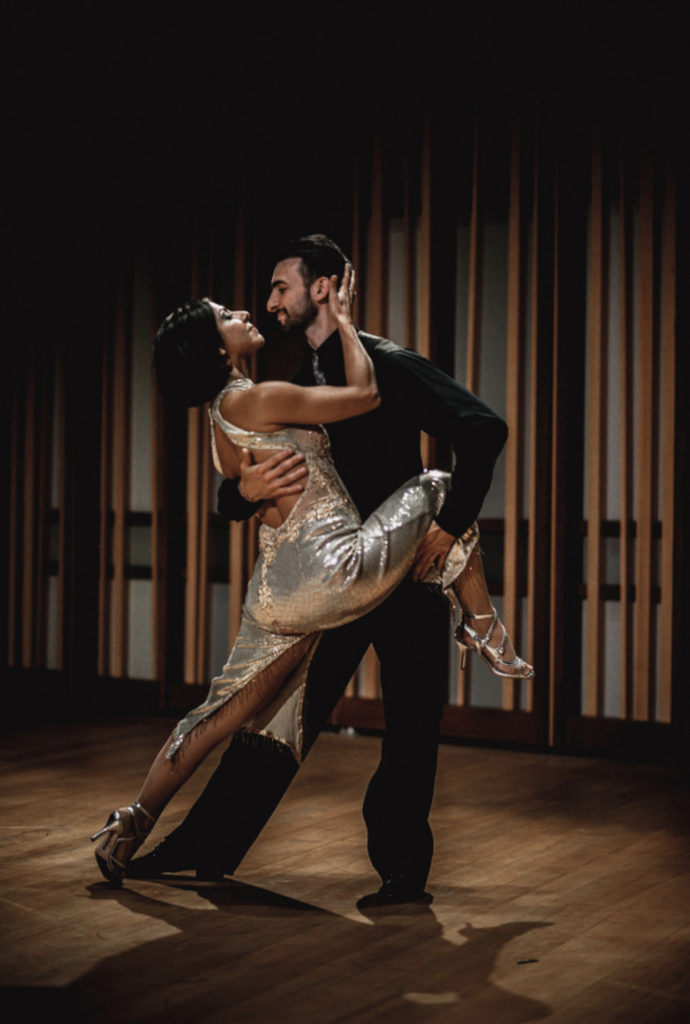 In Martin’s arrangement of “Contrabajeando,” co-written by Piazzolla and Anibal Troilo, Martin’s solo bass opened the piece with an extended virtuosic prelude that morphed into the typical tango rhythmic ostinato. Violinist David Buckley then entered with agitated flourishes, followed by variations on those themes by flutist Beth Ross Buckley and pianist Dana Burnett. Piazzolla played bandoneon in Troilo’s tango orchestra from 1939 to 1944, and he developed his craft making arrangements for Troilo, who was a mere seven years his senior. Later in his career Piazzolla composed and recorded “Suite Troileana—Lumiere” to honor his colleague.

Camarada reprised Piazzolla’s “Milonga Sin Palabras” from their 2018 tango concert at Balboa Park’s Mingei Museum. The milonga, a slightly slower genre than the tango, was one of the predecessors of the tango, and Piazzolla’s meditative milonga skillfully alternates sultry and melancholic moods. Percussionist Matthew Armstrong joined the ensemble in several pieces, adding an ominous edge with sharp attacks in Piazzolla’s “Tango del Diablo” but reinforcing a more gentle pulse in the composer’s “Poema Valseado,” a work that cleverly retrofits tango with the traditional triple meter of the waltz.

Martin offered “Nostalgias” by J.C. Cobain and E. Cadicamo as a rhapsodic improvisation for solo bass while Carolina Jaurena circled him with apt choreographic commentary. Placed stage center on a darkened stage with only a single spotlight overhead, this unusual duo evoked primitive ritual. As the program’s finale, Pedro Laurenz’s “Milonga de Mis Amores” provided the most flamboyant tango offering of the evening, overflowing with raucous suggestion deftly contained by its sophisticated structure. Camarada offered Piazzolla’s “Kicho” as an encore.

This program by Camarada was presented in La Jolla’s Conrad Prebys Performing Arts Center on July 16, 2021.