It’s been 60 years since the musical show Hair helped lever American culture toward a fresher, freer world and now the Old Globe Theatre, which eventually gets around to everything, has returned from the pandemic with a first-class revival of the Gerome Ragni-James Rado-Galt MacDermot masterpiece, one that succeeds by doing nothing much that isn’t right there in the script. 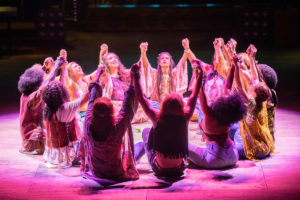 The cast of Hair, in a revival by the Old Globe Theatre. Jim Cox photos.

It is treacherously difficult to restore a period piece without bending and hammering it to fit. Sets and costumes can be duplicated meticulously. Performance styles can be researched and reproduced. Program notes fill in context.

But the audience is now, not then. The piece must make sense to the playgoer of today. And that’s a burden.

In celebrating its new era of consciousness, Hair made its rep with irresistibly sweet and beautiful youths plunging the shiny new pop music right through just about every taboo that might offend older generations. Sex, drugs, politics, race, religion, patriotism, economics: There was something to annoy – and titillate – everybody.

Decades later, the taboos have shifted. Sex and drugs are institutionalized. Politics and religion have taken some nasty turns, dragging economics along. Ethnicity and gender have emerged as new minefields of sensitivity. Originally, there was no reference to “gay” and only one line on the subject – “I’m not homosexual or anything, but…Mick Jagger!”  – which now has been joined, at the Globe, by considerable harmless eye-rolling innuendo.

Anyway, 60 years later and Hair is still worth the effort. The Old Globe production can be recommended as the nearest anybody is going to get these days to the impact of the original because director James Vasquez made nearly all the right choices. 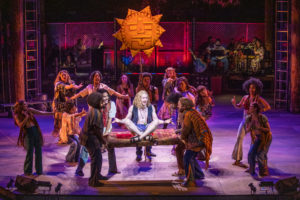 Andrew Polec as Berger, center, with the cast of the Old Globe Hair.

The clue to the show is in the setting: “New York City and the fluid-abstract world of 1968.” Whatever that means is what this show is about. Vasquez sees it as a community, united beyond individual beliefs and supporting each other against a hostile outside world of, okay, abstract fluidity.In 1968, every male citizen had to do something about the possibility of being drafted into the military. That was the reality of that generation and that is the storyline running through Hair : Will Claude obey his draft notice or become some kind of fugitive?

The show was rewritten and adjusted often during its checkered history from off-Broadway experiment to international smash hit, but the ending always left Claude, along with so many young men, a victim. And there was so little that could be done. Amidst all the blossoming of the Age of Aquarius, evil still gobbled the hindmost.

Vasquez and his tireless company of attractive kids roll right through statement after statement, singing each song with astonishing accuracy and energy – Angela Steiner steering the music – and dancing with apocalyptic conviction – the choreographer is Mayte Natalio. The show is written without much need for star quality, just the sublime ecstasy of youth, and these actors deliver. 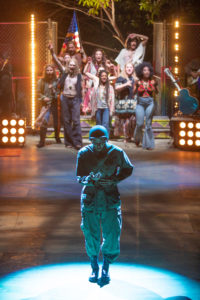 Tyler Hardwick as Claude with the cast of Hair at the Old Globe Theatre.

My regret-at-what-might-have-been is concentrated on the décor. David Israel Reynoso and crew get the costumes mostly right, though part of the point originally was worn and shabby chic. But Tim Mackabee lost track with the scenery

“Fluid-abstract,” remember? That plus Vasquez’s community theme seems to cry out for a tender flower blooming despite the grim urban crush looming all about. Or something. Instead, there are confusing panels, giant curtains and other distractions. Nothing that really harms the show but nothing that helps, either.

And Amanda Zieve’s lighting design misses many an opportunity for fluid abstraction in a show of leaps and flashes. The notorious nude scene, what could be seen through the fierce banks of bright white lights drilling audience eyeballs, resembled a bunch of track athletes removing their warmups before the race.

Lines in the script demand a winter setting, with fire in the trashcan, the references to cuddling up and even a snow effect. Not hard to do with proper decisions on lights and costumes. Instead, this looked just balmy.Still, with the confident, driving seven-piece band under Angela Steiner’s brisk and accurate direction and the handsome, resolute cast, this is a Hair to seek out and accept for the pleasure of future memory.