The prospect of attending Friday’s San Diego Symphony concert devoted solely to Mozart and Mendelssohn did not enthuse me. We experienced far too much of this standard repertory—meat and potatoes programming—under the orchestra’s previous Music Director, Jahja Ling. 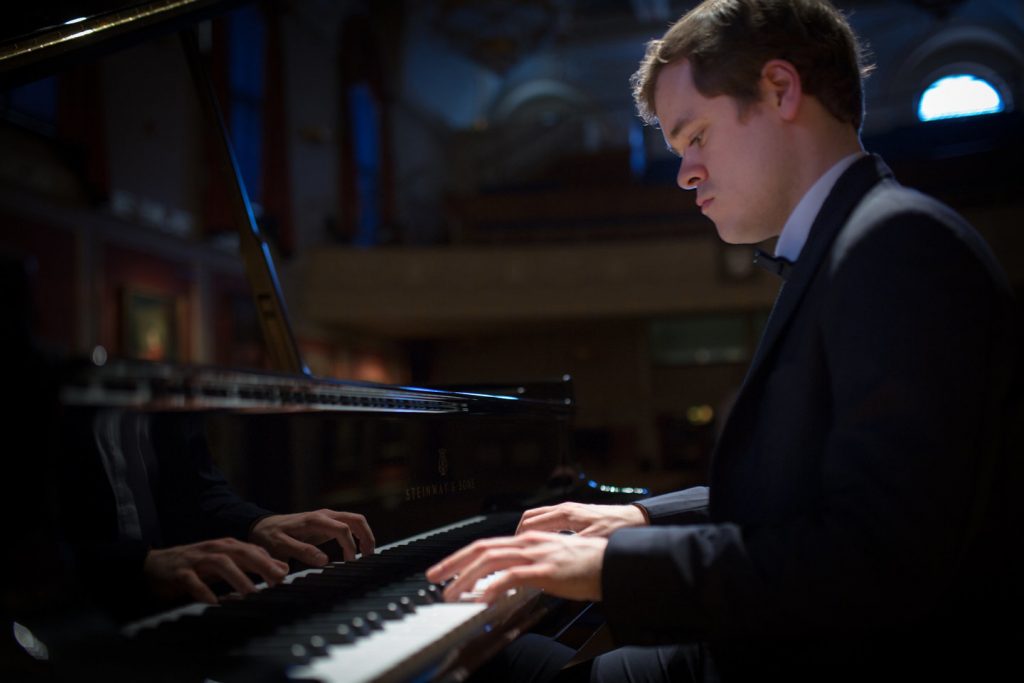 From the outset, the young British pianist exhibited crisp, sparkling articulation and suave dynamic shadings that both enlivened and refreshed this familiar showpiece. Usually—and incorrectly—given the nickname “Jeunehomme,” this piano concerto, K. 271, was the 21-year-old composer’s first truly virtuoso piano concerto, one he continued to perform with pride on his later concert tours to Europe’s musical capitals.

Like every concert pianist hired by a major orchestra, Grosvenor displayed immaculate scales and flourishes at thrilling tempos, but the way he shaped these passages, along with his insouciant rubatos and adroit dynamic shadings, drew his listeners into his alert and elegantly detailed interpretation. I was impressed how skillfully Grosvenor probed the dramatic subtext of the slow middle movement, set in C minor, always a ruminative tonality for Mozart.

Guest conductor Jun Märkl proved an ideal cohort, gracefully integrating soloist and orchestra, shaping the orchestra’s lines to mirror the pianist’s phrasing and dynamic nuances. Grosvenor’s and Märkl’s bristling tempo in the Rondo appeared to push the orchestra to the limit, but it made for an exhilarating finale.

The orchestra’s vibrant response to Märkl’s commanding direction of Mendelssohn’s Fifth Symphony, known as the Reformation Symphony because of the prominent use of Luther’s hymn “A Mighty Fortress Is Our God” throughout the final movement, made a splendid case for this work. The brass choir and winds richly colored the broadly scaled opening section of the first movement, and when the full orchestra took off with the “Allegro con fuoco,” Märkl’s strong, disciplined lead drove the music with a satisfying white-hot glow.

The symphony’s cheerful “Scherzo” benefitted from clean, precise rhythmic iterations, and Märkl drew dreamy poetry from his restrained but radiant approach to the luxurious themes of the slow movement.

Mendelssohn was an accomplished organ recitalist, and in the magnificent counterpoint the Fifth Symphony’s final movement that used the themes of Luther’s great chorale, I hear the composer’s tribute to J. S. Bach’s elaborate organ chorale preludes from the Great Eighteen and Klavierübung III collections. Mendelssohn singlehandedly brought back to public performance Bach’s great St. Matthew Passion the year before he composed this symphony, and the finale of the Reformation Symphony exudes Bach inspiration.

In his teens, Mendelssohn composed some amazingly sophisticated works, including his Octet for Strings and the Overture to A Midsummer Night’s Dream. His Trumpet Overture comes from this same youthful period, but, alas, it has none of the inspiration of the those two works. The work opens and closes with a simplistic brass choir fanfare motif—hence the name Trumpet Overture—but most of its eight minutes gurgles along in a stream of bland triadic noodling. I suggest this is why the work rarely finds its way onto symphony programs.

This concert was presented by the San Diego Symphony in the Jacobs Music Center’s Copley Symphony Hall in downtown San Diego on Friday, January 31, 2020, and will be repeated on February 2 in the same venue.