One of the great aspects of a Fresh Sound concert at Bread and Salt is how unavoidably it requires the avid listener to reconsider his or her notion of what music is. Celebrating an admirable 20 years of audacious programming, impresario Bonnie Wright did the right thing Friday (February 24) and brought back the two musicians who inaugurated Fresh Sound in February, 1997—Steve Schick and Vanessa Tomlinson. 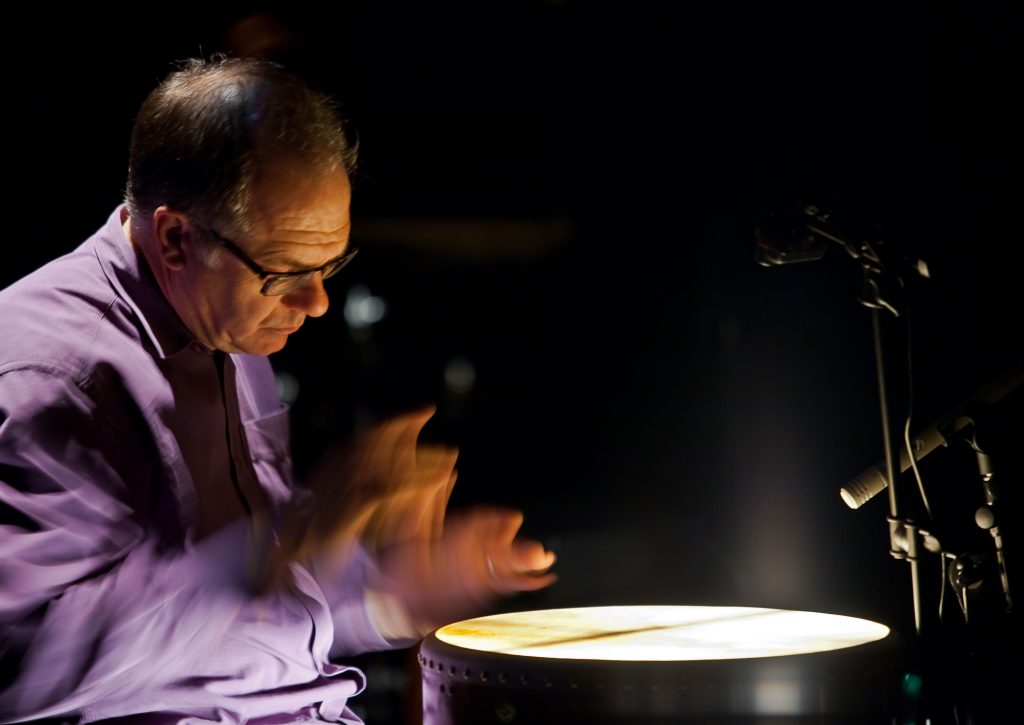 Employing an astonishing simplicity of sound sources—I am tempted to say paucity—these two percussion gurus nevertheless enchanted a large, receptive audience with their surfeit of skill and invention. Schick’s bold electronic expansion of Kurt Schwitters’ iconic sound poem “Ursonate” brought operatic depth and drama to an evening that began with only clever and amusing.

“Ursonate” is sometimes translated as “Primeval Sonata,” but I think the Dadaist creator of the work meant “Ursonate” in the sense of “that sonata that existed before any composer started writing sonatas.” Schwitters was inspired by a very Dada poem “fmsbw” by Raoul Hausmann, which he heard recited in 1921. Schwitters took those explosive sounds that clog spoken German and arranged them in dramatic but nonsensical abstract poetic stanzas, even structuring this 30-minute solo “aria” into four separate movements that might be found in any classical or neoclassical instrumental sonata.

Schwitters worked on “Ursonate” for ten years, publishing it in a 1932 edition of his own arty magazine Merz. You can easily find on YouTube a short example of Schwitters himself reciting a small portion of “Ursonate” in his emphatic, mannered fashion (he escaped Nazi Germany in 1937 and lived contentedly in England until his demise in 1948).

Sitting in front of a large microphone connected to a quadraphonic sound system, Schick raised Schwitters’ text and dramatic recitation style several notches while his assistant at a computer desk manipulated and layered his stream of fricative syllables and raucous rolled “r’s” that made machine gun fire seem like a gentle lullaby. This layering and echoing of short motifs created a powerful verbal heterophony, although in the work’s slow second movement, the computer turned Schick’s sustained vocal lines into a kind of late medieval organum.

Suffice it to say, the Bread and Salt audience was as enthralled with Schick’s virtuoso solo as any Civic Theatre audience finds itself after a scintillating “Queen of the Night” aria by a visiting coloratura soprano.

For their sole performance together, UC San Diego Distinguished Professor Schick and his former student Tomlinson—she is now a professor at Australia’s Griffith University in South Brisbane—showed off in a brassy “Duo for Blindfolded Drummers.” Standing behind a very straight row of eight tenor and snare drums, they tossed off volleys of clever, asymmetrical patterns with surprising assurance. And, yes, they wore blindfolds and had memorized every note of the score.

Tomlinson opened the program with an improvised solo she called “My Favorite Things,” employing a variety of found objects—most likely borrowed from Bonnie Wright’s kitchen and garage. Starting with two long pieces of rope, Tomlinson spurred them into gentle oscillations—Shaken Loops, perhaps?—that made little sound until she guided them over some ceramic bowls artfully arranged on the floor. The rope loops made them sing like a pinging wind chime.

I was less amused by Tomlinson’s predictable rumble from bowing a suspended cymbal and the simulated alarm of her extended triangle solo. But she ended her improvisation with a great cadenza of rapid malleting over some wooden bars, the ceramic bowls, and some empty bottles—all simply placed in useful proximity on the floor. It proved the necessary flourish to tie together her disparate media.

This Fresh Sound concert was presented on February 24, 2017, at Bread and Salt, 1955 Julian Ave., in San Diego’s Barrio Logan. The next Fresh Sound program, the Chris Speed Quartet’s “Endangered Blood,” is slated for March 15, 2017, in the same venue.