The performance series Art of Élan has never relied on celebrity. Over eleven seasons, co-founders Kate Hatmaker and DeMarre McGill have built the series’ reputation on the savvy juxtaposition of worthy but little-known chamber music skillfully played by their colleagues from the San Diego music community.

But a little bit of celebrity every now and then can add a touch of élan to Art of . . . you know what I’m suggesting. 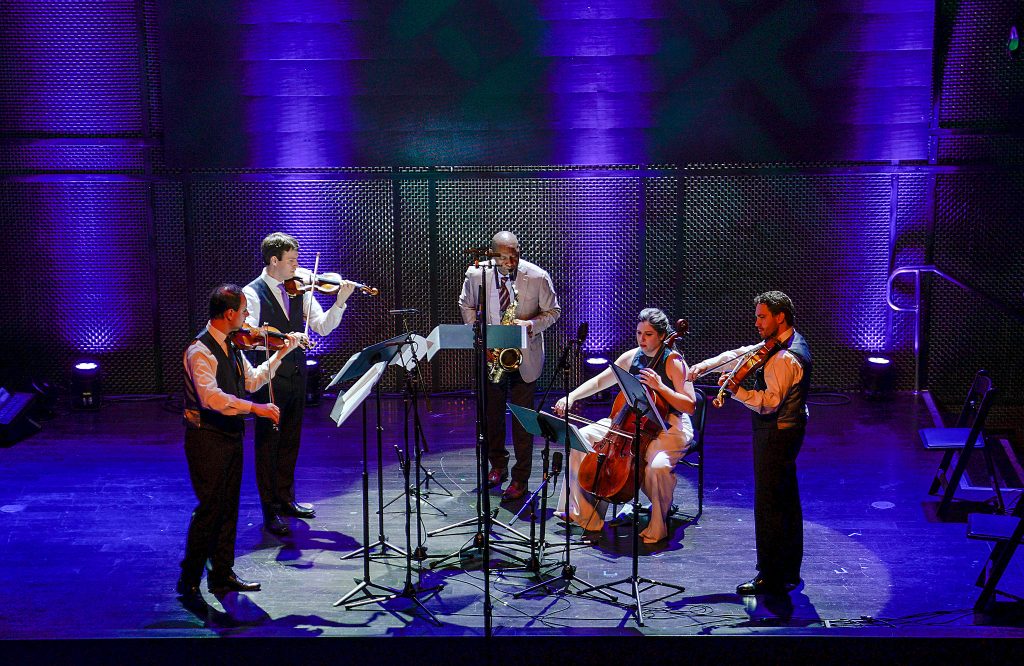 Sunday, April 8, at the Music Box in Little Italy, Art of Élan presented saxophone legend Branford Marsalis with the Chicago-based Kontras Quartet. Their smart program of 20th-century and contemporary offerings—including the premiere of Dan Visconti’s “Beg, Borrow, or Steal” for string quartet and alto saxophone—was greeted with raucous approval by the Music Box crowd.

It would be easy to characterize Visconti’s style as an eclectic blend of jazz, traditional American folk, and classical style, but it is more sophisticated than that. Listening to two of his chamber works—Kontras played his single movement “Black Bend” immediately before the new, commissioned “Beg, Borrow, or Steal”—it appears that Visconti has taken the freedom in which jazz performers regularly indugle as they pass around solo improvisations and applied it to the more tightly controlled structures of classical chamber music.

In the second movement of “Beg, Borrow, or Steal,” for example, the alto saxophone opens with a subdued, lyrical theme with little or no vibrato and is soon joined by the cello pressing a more edgy, angular counter theme. After a time, the two violins begin a nervous, quiet flurry of high-pitched harmonics with no apparent thematic relationship to the lower voices, creating a sonic collage that is both intimate and orchestral.

With amazing speed and dexterity, Visconti changes mood, sharply contrasts tight clusters of thematic ideas, and unfolds inventive textures: his continuity is his drive and an enigmatic intention that relentlessly propels his music. Visconti’s essentially tonal harmonic language rarely strays outside those borders, but, like Bartók, he never falls into easily anticipated progressions. Although the three movements of “Beg, Borrow, or Steal” add up to just under 30 minutes of performance, for this listener the piece packed the punch of an entire Mahler Symphony.

The syncopated melodic shapes of Visconti’s 2003 “Black Bend” and its puckish pizzicato strumming in the lower strings suggested Visconti’s jazz affinities, but his opening slides and scrapes established his allegiance to avant-garde vocabulary. A haunting piece with a dark back story, “Black Bend” left me wanting more. Should Visconti wish to return to it, “Black Bend” could be the opening movement of a compelling string quartet.

Marsalis lent his mellow, polished saxophone prowess to one other work on the program, the opening movement of Adolf Busch’s Quintet for Alto Saxophone and String Quartet from 1932. One of those incredible polymaths from the last century, Aldof Busch was a noted violinist, orchestra conductor, composer, and festival impresario: as émigrés to the U.S. from Nazi-dominated Europe, he and Rudolph Serkin founded New England’s celebrated Marlboro Music Festival.

The structure and counterpoint of Busch’s Quintet proved impressive, with the saxophone weaving in and out of the string texture as an equal partner. A single movement struck me as adequate exposure to Busch’s compositional accomplishment, however. The term that came to mind while listening to this performance was Gebrauchsmusik, a word coined by that other noted German émigré composer Paul Hindemith: “useful music.”

Kontras opened the concert with Osvaldo Golijov’s brooding yet mysterious “Tenebrae” from 2000. The marvelously clear acoustics of the Music Box allowed us to enjoy fully the wide palette of colors and nuanced shadings that Kontras so ably employed in this work. Violins Dmitri Pogorelov and Francois Henkins, violist Ben Weber and cellist Jean Hatmaker comprise this stellar ensemble. Unlike most string quartets, each player displays a distinctly individual and appealing sonority, yet their ensemble makes a surprisingly strong and unified sound. May I suggest that Art of Élan bring Kontras to San Diego every season?

Two shorter works completed this generous program: Erwin Schulhoff’s Zingaresca from his Duo for Violin and Cello and Heitor Villa-Lobos’ “Jet Whistle.” Sisters Kate Hatmaker and Jean Hatmaker made the most of Schulhoff’s jovial, clever counterpoint, and flutist Rose Lombardo brought the requisite panache to the virtuoso flourishes that Villa-Lobos concocted for his clever etude. She was most ably assisted by Jean Hatmaker.