In Saturday’s concert of all three Piano Trios by Johannes Brahms, we experienced many sublime moments. The eloquent shimmer of cellist Yo-Yo Ma’s solo theme at the beginning of the B Major Trio, Op. 8, for example, and the ensemble’s sparkling minor mode variations of the C Major Trio, Op. 87, Andante linger sweetly in my memory. Pianist Emanuel Ax, violinist Leonidas Kavakos, and Ma brought their virtuosity to Copley Symphony Hall, giving the La Jolla Music Society its most high power chamber music concert of the season. 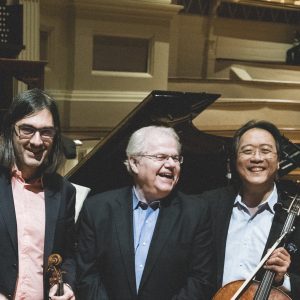 But in spite of the prowess of the musicians on stage, this did not turn out to be the most rewarding concert of the season. The hall was the culprit. Although quiet, lyrical sections of this piano trio sounded present enough, once the ensemble shifted into a brilliant and rousing forte, the room diffused their sound, causing it to lose its focus. Having attended a recital at the Balboa Theatre only two nights prior to this performance, I spent my evening at Copley wishing we were hearing this ensemble play in the Balboa, where the room would have been a help, rather than a hindrance.

Throughout the performance, I wondered why Ma, a team player of the first order, seemed to overpower Kavakos until I remembered another Copley Symphony Hall shortcoming: it is unkind to the solo violin, robbing its potent overtones and diminishing its volume. Not even Gil Shaham, who has performed at Copley numerous times,  sounds his best in this venue.

Could any piano trio have a more gracious pianist than Emanuel Ax? When the strings took the melodic lead, he coaxed a seamless cushion of sound from the piano that flattered their every thematic nuance. When the piano was in the spotlight, his themes bloomed with that perfect balance of fervor and refinement, and when Brahms counted on the piano to drive the ensemble to a ravishing climax, Ax provided the muscle in just proportion.

Hearing Brahms’ three piano trios played in one setting does not provide impressive revelations about the composer’s development. The C Major, Op. 87, and the C Minor, Op. 101, were both written in his most mature years, and although the B Major, Op. 8, was a very early composition, he revised it extensively after he had finished the other two piano trios. The reward was experiencing the composer’s sophisticated mastery of a chamber music genre that was close to his heart and opened it so generously.