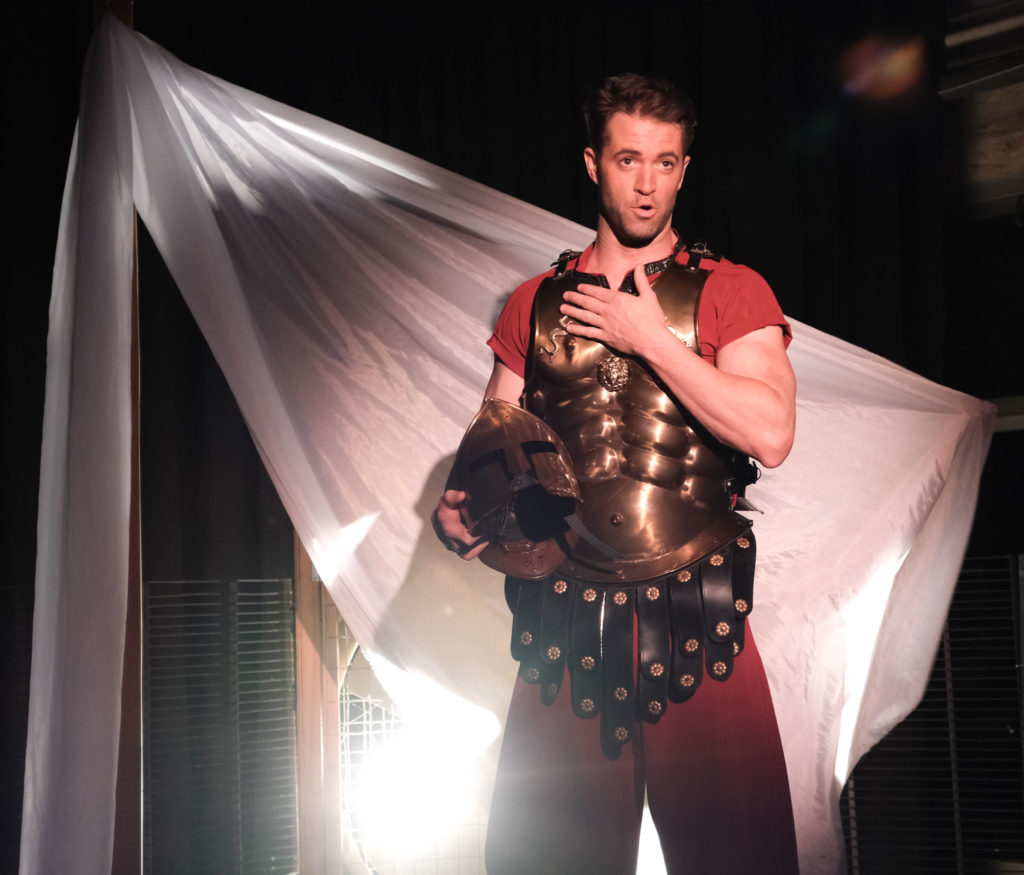 Prior to the 20th century, the canon of English-language opera is tiny, and Purcell’s 1689 Dido and Aeneas is the only one that has remained in the repertory. John Blow’s 1683 Venus and Adonis, on which some historians think Purcell and his librettist Nahum Tate based their opera, may be the first English-language opera, but it remains only as a footnote in opera history texts.

The enchanting fluidity of Vanessa Dinning’s stage direction of Dido and Aeneas was superbly assisted by Jerry DeLane’s simple set design, a central square stage—with audience members seated on three sides— that resembled an old-fashioned four-poster bed that allowed the actors to enter and exit from any direction. Although the libretto calls for specific settings—a palace, a cave, a grove—no set or props identified such places, allowing the players’ interaction to sufficiently imply the dramatic context. That the characters made most of their entrances coming through the aisles of the hall gave the audience an uncanny sense of involvement in the plot, a budding romance between Dido, the queen of Carthage, and the Trojan warrior prince Aeneas that is foiled by the trickery of an evil Sorceress and their coven.

Victoria Mature presented a compelling Dido, her dramatic soprano infusing the queen with an adroit mixture of dignity and compassion. She glided through her upper range gracefully, but the richness of her mezzo range developed the deep pathos of her famous final aria “When I am laid in earth.” As her confidante Belinda, Katherine Polit’s dazzling soprano gave Mature abundant emotional support, and her opening arietta “Shake the cloud from off your brow” immediately established her noble character.

Purcell denied his Aeneas the arias in which Dido and Belinda portray their souls, but baritone Evan White infused his recitatives with virile declamation and such intense dramatic ardor, that it made Dido’s rejection of his offer to defy the gods and remain with her all the more poignant.

As the Sorceress, a role that may be taken by either a mezzo-soprano or a baritone, Walter DuMelle’s powerful bass hurled out profuse threats and sinister incantations that certainly expressed the character’s cunning and hatred of Dido, although there can be too much of an evil thing. Young dancer Marina Hall’s nimble, graceful Mercury made her a most persuasive messenger.

A string quartet with harpsichord under the precise direction of music director Brendan Nguyen faithfully realized Purcell’s instrumental score, although their placement on a separate stage not adjacent to the actors’ central stage caused occasional coordination glitches between instruments and singers.

Composer Clint McCallum, whose avant-garde opera Paradise TBD opened at Bread & Salt last May, was the right person to make digital sonic transformation of Purcell’s music for the opera’s otherworldly scenes of the Sorceress and their hyperactive coven. We can only guess how Purcell might have reacted to electronic realization, but I would suggest that since Purcell was an accomplished organist, and the pipe organ was the giant synthesizer of the Baroque era, that he would be at home with such transformations.

Marcene Drysdale’s costumes for the women elegantly portrayed Attic simplicity, and her striking red military garb for Aeneas was perfect. Mercury’s helmet provided the expected symbolism, but I am less certain that the flowing white gown for the Sorceress was the correct symbolic hue—black or dark purple would have conveyed a more sinister edge. Jennifer Edwards’ eerie, dramatic lighting for the coven scene was well-chosen.