It would be easy to interpret Peter Rothstein’s a cappella opera All Is Calm: The Christmas Truce of 1914 as a feel-good story about enemy soldiers who celebrate the true spirit of Christmas by putting down their arms to sing Christmas carols to each other. Rothstein’s work is historically accurate, and its crisp dialogue is extracted from letters, poems, and notes written by soldiers fighting on both sides of the western front of the Great War. 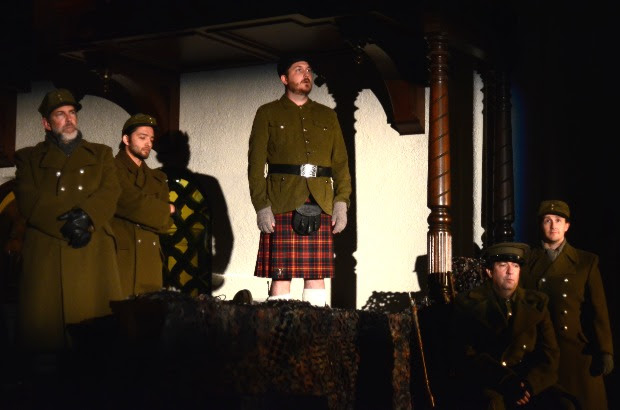 Andrew Konopak (center) and cast of All Is Calm [photo (c.) Donnie Eastman]

But All Is Calm is much more than that. It is about the cost of war in terms of the lives squandered and the damaged spirits of the survivors. It celebrates the humanity of those who are assigned to kill and questions the morality of those who send their offspring into battle. These are the unavoidable subtexts of the work’s dialogue as well as its cornucopia of carols, popular ballads, and patriotic songs.

Bodhi Tree Concerts brought All Is Calm to San Diego in 2016, and has offered it yearly ever since, including a 2018 joint production with San Diego Opera at the Balboa Theatre. Bodhi Tree Concerts appropriately opened this year’s All Is Calm production on Friday, November 11—traditionally celebrated as Armistice Day, when World War I officially ended—in the sanctuary of La Jolla’s St. James-by-the-Sea Episcopal Church.

I confess I began to choke up as Andrew Konopak intoned the prologue’s traditional Scottish recruitment song “Will Ye Go to Flanders?” Not only did his rich, clarion baritone fill the sanctuary, but having experienced All Is Calm several times, I knew Konopak would return later in the drama to reprise this song in a different mode–a stark elegy to fallen comrades who would never return from Flanders.

The drama’s recruitment stage bangs the patriotic drum with a fervent rendition of “God Save the King,” and later we hear the German contingent sing “Deutschland, Deutschland über alles,” the German national anthem (at that time) sung to the traditional Haydn melody. As Christmas Day approaches, we hear the cheery strains of the English carol “We Wish You a Merry Christmas,” and the Germans set up a tree while singing “O Tannenbaum.”

When the two sides bravely enter no man’s land to meet and exchange token gifts, the drama’s trove of carols unfolds: French, German, Dutch, and English carols, some sung in traditional simple four-part harmony and others, such as “Silent Night,” expanded into robust anthems. Timothy C. Takach and Erick Lichte composed the All Is Calm score, and their adroit harmonies and supple counterpoint revealed the rewarding potential of the male chorus. Juan Carlos Acosta, Artistic Director of SACRA/PROFANA, serves as the production’s music director, a position he has held since the first Bodhi Tree All Is Calm, and conducts with his trademark cool precision, bringing a surprising and welcome variety of sonorities from just 10 singers.

Jacob Bruce’s inventive stage direction turns the spacious chancel of the Episcopal Church into an impressive stage, devising ample movement and multiple formations for the singing soldiers, while cleverly disguising the chancel’s many liturgical impediments. Twyla Arrant’s skillful lighting also proves most helpful in this deception. Ingrid Helton clad the soldiers in appropriate heavy winter garb, although I thought there could have been more evident differentiation between the uniforms of the German soldiers and those of the British. Considering the number of English dialects the work requires, Vanessa Dinning’s role as dialect coach is a godsend.

Just before the final carol, trumpeter Clarence McDuffie III provided “The Last Post,” a traditional English Bugle Call, reminding the audience that this was the sole instrumental line in the entire production. Given the right singers, the human voice is indeed an awesome instrument.

As I pondered again Rothstein’s All Is Calm, it dawned on me that the phrase from which his title comes, “All is calm, all is bright” is not found in the original German text of the carol written in 1816 by the Austrian priest Father Joseph Mohr. The line “all is calm, all is bright” was inserted by the American Episcopal prelate Rev. John F. Young, who translated Mohr’s text “Stille Nacht, heilige Nacht” into English. An accurate translation of Mohr’s first two lines of his opening stanza would be “Silent night, holy night! Everyone sleeps, but only the beloved holy couple keeps lonely watch.”

And I think that Mohr’s picture of a world asleep while Mary and Joseph attend to the birth of their child is strangely more parallel to the anxious anticipation of those soldiers who climbed out of their trenches that Christmas night in 1914 to meet their enemies.

Not calm and bright, but einsam und heilig!

‘All Is Calm: the Christmas Truce of 1914’ is presented by Bodhi Tree Concerts at St. James-by-the-Sea Episcopal Church, La Jolla, November 11 – 13, 2022. The performance of Nov. 11 was attended for this review.