“Mighty sweet,” like “milk and honey”… Blues in the Night, under the direction of Yvette Freeman Hartley, opened to a standing ovation at the North Coast Repertory Theatre, where it runs through February 12. 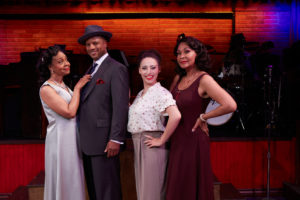 Originally conceived and directed by Sheldon Epps, this musical revue, set in a 1930s Chicago hotel, features three women and a gentleman sharing their experiences about love. Told entirely through song, the Woman of the World (Karole Foreman), Lady from the Road (Anise Ritchie) and Girl with a Date (Ciarra Stroud) each lament through the blues how they have been wronged – perhaps, we think, by the Man in the Saloon (Elijah Rock). 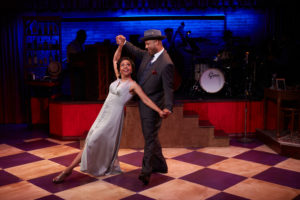 Popular tunes in the revue include those by Bessie Smith, Billie Holiday, Alberta Hunter, Harold Arlen, Johnny Mercer, Ida Cox, Duke Ellington, and Billy Strayhorn, and there are some shining moments. Among them are the titular group number “Blues in the Night,” which kicks off the second act and features lush tone and timbre alongside solid harmonies, “Rough and Ready Man” featuring Foreman with sass, feistiness, and growl to align with the wailing muted trumpet, an irreverent and raunchy “Kitchen Man” by Ritchie, and Rock’s “I’m Just a Lucky So-and-So,” in which he radiates charisma and charm, a bright smile, and some snazzy tap footwork.

And while there is something truly lovely about the hollers and wails of the blues being hurled widely in the way of the audience with such boldness and vitality, I imagine that the performers’ confidence will only grow and harmonies will gel more closely as the show progresses in its run. 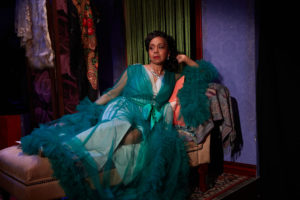 The production is set snugly into the intimate North Coast Rep space. High platforms and a bar area stretch across much of the back of the stage. The band is tucked into the back corner in very close quarters. On one side of the stage, a large neon hotel sign blinks above two women’s stacked quarters; the third woman’s rooms are on the far opposite side. And while the space is close and requires some careful navigation in some instances by the performers, set designer Marty Burnett and prop designer Christopher Williams have done well to independently apportion each room to reflect the nature of its occupant and to give them a feeling of being lived in through the variety of props and furniture. In particular, a plethora of textures across the stage ranging from tassels to embossed wallpaper to bricks and exposed pipework were visually interesting.

While mostly well fitted and featuring time-appropriate details, there are some costume choices (a chorus girl’s outfit with quite noisy velcro, a somewhat ostentatious red velvet and multi-patterned flouncy dress, and one blue shawl in particular) that miss the mark for me, as well as some costume/lighting choices that I feel could have been more carefully aligned. 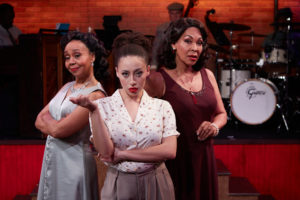 Ranging from high-energy swing to forlorn blues numbers, North Coast Repertory Theatre’s production of Blues in the Night is described in the director’s note as a “bouncing, soulful buggy ride through love” and will perform through the end of its extension on February 12.