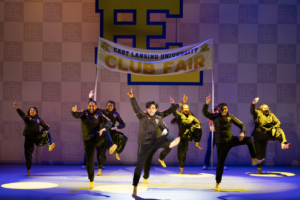 “Bhangin’ It,” the world premiere musical that opened Sunday night, ignites when it brings Indian dance and music styles to the La Jolla Playhouse stage. A fabulous Bollywood number, set in a drugstore, features sparkle rain, translucent red banners, and a huge background video that puts dancers on a moving train. And choreographer Rujuta Vaidya’s exuberant Bhangra finale, driven by virtuoso drumming by Deep Singh, had the audience cheering.

The story by Mike Lew and Rehana Lew Mirza takes on important themes: Who has the right to represent a culture, and how pure does that representation have to be? There’s also the question of how we negotiate our multiple layers of identity—represented visually by Robert Brill’s set that creates a layered picture frame. 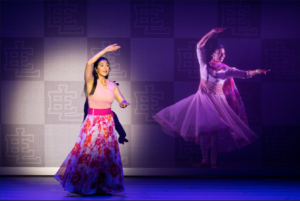 Mary (golden-voiced Ari Afsar), daughter of an Indian mother and White father, loves competing on her college Bhangra team, the Tigres. After clashing with teammate Preeti (Vinithra Raj), who brags about being 100% Punjabi (she’s also 110% mean girl), Mary starts her own team and includes anyone who wants to join. Now she just needs to teach her ragtag, endearing bunch how to dance … and decide how much she’s willing to dilute Bhangra’s authenticity.

It’s a great set-up, and the bones of “Bhangin’ It” seem strong. However, the storytelling—from Lew’s and Mirza’s book and director Stafford Arima—too often uses a broad brush, and while it can amp up the comedy, it works against engagement. Mary’s dance team is so slapstick-klutzy that at their first practice, they knock each other over, repeatedly. The conflict over authenticity is overly centered in the antagonism between Mary and poor Preeti, who, tasked with being a one-woman Cultural Purity Squad, becomes a caricature.

Happily, the show also contains subtle moments that, with some refocusing, could make Mary’s dilemmas more real. Authenticity, for example, is handled deftly in a talk between Mary and her Latinx buddy, Billy (played with warmth by Brandon Contreras). She reveals she’s never learned how to wrap a sari. He says he know so little Spanish he can barely talk to his abuela; plus, how can a guy from Toledo, Ohio have any cultural cred? 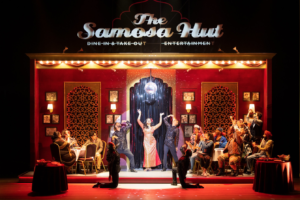 “Get your butt to the Samosa Hut.” Photo: Rich Soublet II

Sam Willmott did the original music and lyrics in collaboration with Singh, who plays in the seven-person band. Their Indian-flavored numbers are joyous, for instance “Khaana, Khaana”—with the chorus “Get your butt to the Samosa Hut”—featuring the magnificent Alka Nayyar as Rekha, a restaurant owner who’s a master dance teacher. Nayyar is in fact a master of several Indian forms; a regal presence, she steals every scene she’s in. She also makes me wish that more of the cast had that wonderfully lifted chest and expansive shoulders.

Willmott’s more standard musical-theater songs are a mixed bag. The duet “Eat Each Other” captures the poisonous rivalry between the dance teams and showcases two of the show’s most appealing performers, Jaya Joshi as Mary’s bestie, Sunita—a radical artist who’s made a papier mache uterus—and Bilaal Avaz as the Tigres’ captain, Amit.

Other songs leave little impression, except for some awkward lyrics: “You treat Bhangra disrespectfully and it’s painful.” And two big songs for Mary, about dancing as a connection to her dead mother, display Afsar’s powerful voice but don’t grab me emotionally.

Whatever problems “Bhangin’ It” may have in its debut run, though, they’re in part a sign of how big Lew’s and Mirza’s vision is. This is a show with a lot of heart, grappling with issues that matter.