Now that the pandemic’s restrictions on public gathering are beginning to relax, on Saturday (April 10) the La Jolla Music Society boldly opened its new outdoor chamber series in The Conrad’s Wu Tsai QRT.yard. Up and down La Jolla’s Fay Avenue, locals and tourists were enjoying their early al fresco lunches, but the serious music aficionados in The Conrad’s spacious covered patio were imbibing a more intoxicating elixir 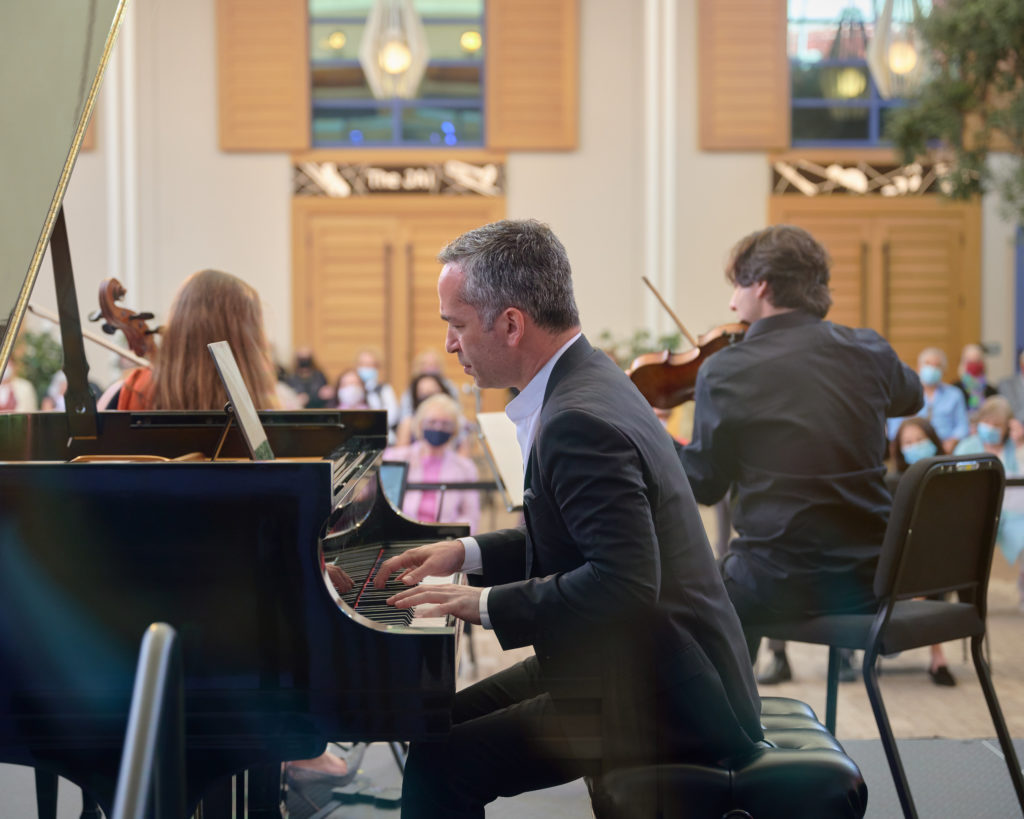 SummerFest Music Director Inon Barnatan and cellist Alisa Weilerstein collaborated in Cesar Franck’s beloved Sonata in A Major for Cello and Piano, and the powerful duo was then joined by violinist Philippe Quint for Aram Arensky’s Piano Trio in D Minor, Op. 32. The adjective thrilling is usually reserved for massive productions such as Beethoven’s Choral Symphony or Mahler’s “Symphony of A Thousand,” but this Franck Sonata was indeed thrilling, powerfully and passionately interpreted with astounding command.

Weilerstein’s effulgent sonority and assertive phrasing gives late Romantic works such as the Franck Sonata irresistible emotional impact, and Barnatan’s prowess at the piano pulled demanding, complex sonorities from the instrument without so much as a hint of clangor. His cool authority subtly tempered Weilerstein’s incandescent drive, a merging of strong musical personalities that made every measure of the Franck rewarding. Listening to Weilerstein and Barnatan fill the courtyard with such sumptuous music, I recalled this duo’s equally brilliant account of Rachmaninoff’s Sonata in G Minor for Piano and Cello inside the Baker-Baum Hall at The Conrad in the 2019 SummerFest—I really cannot think of two instrumentalists I would rather hear perform together!

By the time Arensky composed his Piano Trio in D Minor in 1894, French audiences were experiencing the new wave of Debussy’s impressionism—his “Prelude to the Afternoon of a Faun” was written in 1894—but in Czarist Russia, high Romanticism remained the lingua franca. As a member of the distinguished Moscow Conservatory faculty, it is no surprise that Arensky’s Piano Trio is elegantly constructed in the traditional four movements, featuring a daunting but playful Scherzo and a thoughtful, slow Elegia surrounded by lively outer movements.

Perhaps because Arensky wrote this Piano Trio as a tribute to the cellist Karl Davidoff, a distinguished Russian cellist of the period, the cello dominates this work, presenting most of the composer’s musical ideas while the piano and violin support the cello. As in the Franck Sonata, Weilerstein’s vibrant sonority and sumptuous phrasing flattered Arensky’s generous themes, from the scampering, agile motifs of the Scherzo to the low penetrating theme that opens the Elegia.

Quint’s steely timbre may not have been the perfect complement to Weilerstein, but it gave him welcome power in his upper range to balance his robust colleagues. I was not able to hear Quint when he performed in the 2019 SummerFest, but I recall his mighty account of Aram Khachaturian’s Violin Concerto with the San Diego Symphony in 2014. Barnatan appeared to relish the turbulence of the piano part, but he maintained the balance of the ensemble with consummate skill.

The three performers gave a winning, often urgent account of the Arensky Piano Trio, which pleased the carefully distanced courtyard audience. In keeping with its concern for the audience’s safety, at the close of the concert, members were dismissed in small groups to avoid the typical crush of folks exiting the facility.

This performance was presented by the La Jolla Music Society at 11:30 a.m. in the Wu Tsai QRT.yrd at the Conrad Prebys Performing Arts Center in downtown La Jolla. A second performance was given at 2:30 p.m. the same day.