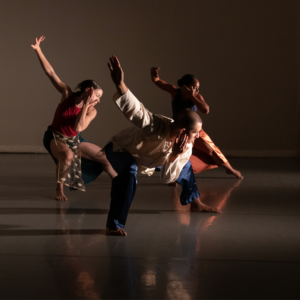 In the gravely beautiful “Crossroads” by Terry Wilson, the dancers appear to be migrants, driven this way and that like leaves in the wind—people whose lack of control over their destinies felt tragic yet distant when this piece premiered in January, 2020. Seeing it again on Saturday—in San Diego Dance Theater’s first indoor performance in nearly two years—drove home the fact that the pandemic has made all of us feel, to some extent, like leaves in the wind; and of course, the global refugee situation has become even more dire, including the latest episode of migrants at the Polish border being blasted by water cannons.

Last weekend’s program at the Light Box (formerly White Box) Theater featured work by Wilson, who became San Diego Dance Theater’s director earlier this year; Jean Isaacs, who helmed the company for many years; and guest artist Khamla Somphanh. The show was titled “Capturing Balance,” and all three pieces, in particular a radiant premiere by Somphanh, involve searching for equilibrium … and often finding it elusive.

In Wilson’s “Crossroads,” the dancers briefly connect, at times coming into unison with dramatic side lunges or deep crouches; then they part. They mime pulling something from their mouths—abandoning their native language? Standing face to face and clasping each other’s wrists, Cecily Holcombe and Mario Jaimes turn in a circle; it looks a bit like a folk dance, except they’re leaning away from each other, pulling so hard you can see the strain in their arms, as if in a battle of wills.

The quest for balance extends to the logistics of staging this piece. It premiered in 2020 with a cast of 12 (reviewed here.) This time, there were only seven dancers, mainly, Wilson says, to have fewer people breathing together in rehearsals and in performance. With the stage less peopled, there’s less sense of swirling humanity. On the other hand, the smaller cast lets us focus on individuals—especially Holcombe, a vivid presence with her strong lines and tense partnership with Jaimes. 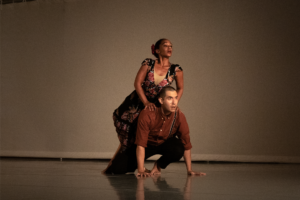 Isaacs offered two excerpts from “Love Letters: Frida Kahlo to Diego Rivera,” a work developed over more than a decade, in which the equilibrium between these artist-lovers is a kind of desperation. “Nothing compares to your hands,” says Kahlo in a recorded reading (by Isaacs) that opens “Love Letter #1” (2001), a graceful, reflective solo in which Jessica Gilmore often gestures with her hands to one side or the other.

“Love Letter #2” (2013) begins with Kahlo’s letter from a hospital, where she’s about to have a leg amputated. “I’m amputating you,” Isaacs quotes … as Marcos Duran joins Gilmore for an impassioned duet. They push against each other, then entwine, impossibly bound. Apart, they clutch at their bodies, twitching. Gilmore is petite, and Duran, while lacking Rivera’s bulk, is tall and solid, adding to drama when she carries him. 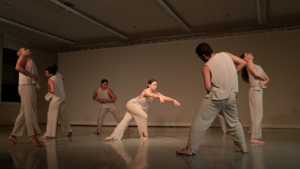 Harmony reigns in the first section of Somphanh’s “Kwan.” Dressed in drapey, off-white tops and pants, the seven dancers stand with palms rotated out receptively, do Tai Chi-like weight shifts, and go into lunges with their arms—and hearts—flung open. Even when the movement quickens and they run in a circle, the music—both Buddhist and Gregorian chants—makes watching this feel like a meditation.

Naturally, the bliss doesn’t last. In the program notes, Somphanh discusses the Buddhist belief that humans have 32 organs, each with its own spirit (kwan); when these get out of balance, look out. The music turns abrasive—like unoiled machinery—and the dancers seem afflicted. They shake. They start in one direction but then retreat. They claw at the air like kids having tantrums. 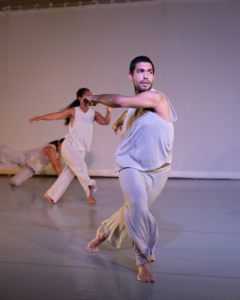 A gorgeous final section uses music by Pinch that pairs lyrical cello with ominous percussion that sounds like marching boots. Similarly, the movement at first remains agitated, cascading through flung arms, arched backs, pliés with twisting torsos. Lauren Christie, an exquisite mover, does big gathering reaches. It’s all so quick and lovely that I already want to see this dance again. Gradually, the energy shifts. Three dancers stand like witnesses as the other four do intricate arm gestures. When the marching-boots percussion quiets at last and the dancers end seated in a circle, it feels as if we’ve been present at a ritual.