Edward Albee’s trenchant one-act play The Zoo Story shot an arrow through the heart of Eisenhower era button-down complacency. In 1958, while Americans were delighting in the vapid flamboyance of Ford’s new Edsel line and sleek kitchen appliances turned out in brown and lime green, Albee focused on the existential rot beneath popular culture’s glossy façade. 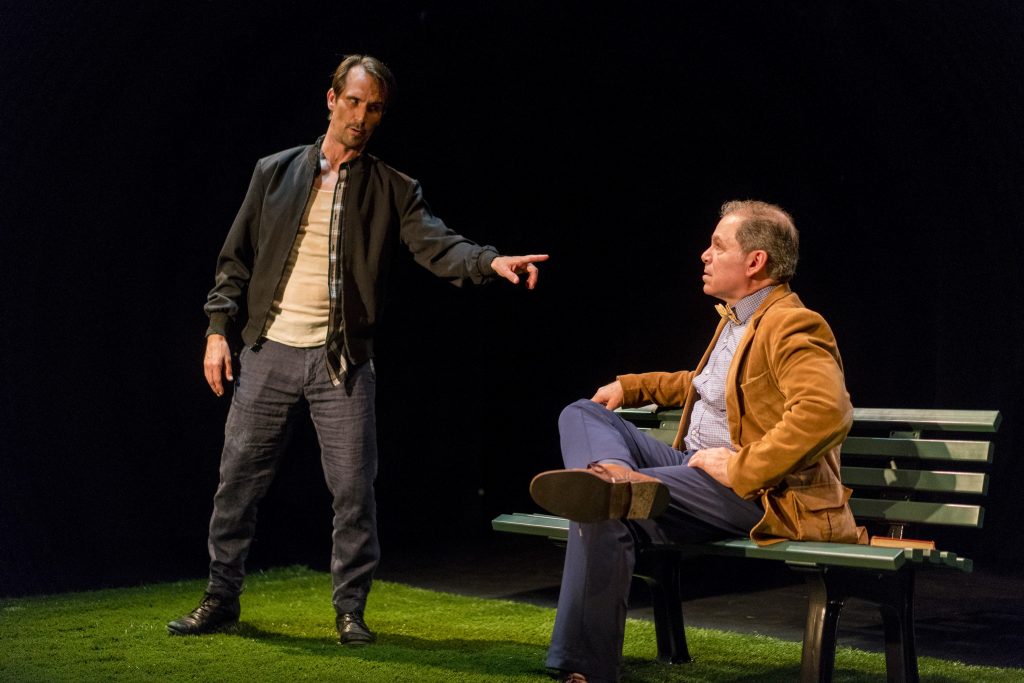 Gercke inhabited the role of Jerry the same way way a concert violinist takes to a Stradivarius, entrancing his audience with the instrument’s sonic wonders. To Albee’s baroque language, Gercke added exuberant, relentless physical expression, moving back and forth across the tiny Diversionary stage like a dervish. Every word, every image displayed its own flourish. At times it seemed that even commas and semi-colons had appropriate gestures. In a lesser actor, this might have been distracting, but Gercke projected Jerry’s existential despair with an eloquently tempered fervor that easily overrode these externals.

In a way, the role of Peter, the innocent occupant of the bench in Central Park on a lazy Sunday afternoon who is challenged by Jerry’s probing questions and unnerving soliloquies, is the more difficult role in this two-person play to pull off, and Johnson has succeeded admirably. At first, he presented Peter as the picture of cozy, upper middle class self-absorption, reacting to Jerry with polite condescension that quickly modulated into mild irritation.

As the action unfolds on that lonely park bench, Johnson deftly persuades us that Peter becomes aware that Jerry, the poor young man who lives in a cheap boarding house on the wrong side of the park, has something that Peter needs or wants, and that is why he stays engaged with Jerry’s curious self-revelations and submits to his invasive questioning. A more aware urbanite, most likely, would have simply moved to a different part of the park to avoid interaction with such a character. Is it sex or danger or mere escape from the feminized home life that now defines him, i.e. a wife, two daughters, two cats, and two parakeets? Johnson suggests that any or all of these factors could be in play, and as his ire escalates to a knife fight that Jerry choreographs, he does the unthinkable in a shattering climax.

Rosina Reynolds’ pitch-perfect direction kept the pace urgent but unhurried. Her design of the play’s climax projected an aura of transfiguration rather than death, a keen insight. Two identical green park benches unadorned by so much as a hint of park shrubbery formed Justin Humphres’ scenic design, appropriate inasmuch as Albee’s play really takes place in that limbo we know all too well from No Exit, Waiting for Godot, and other existentialist dramas from the last century. The success of Alex Crocker Lakness’ intense lighting design became clear when a temporary electrical short required momentary reliance on the theater’s minimal emergency lighting. Jessica John Gercke’s costume design evoked the period succinctly; I especially appreciated Peter’s fussily detailed light brown suit and his pert bow tie.

At the turn of this century, Albee went back and wrote a first act for The Zoo Story to expand the character of Peter. Initially titled Peter & Jerry, the playwright settled on Edward Albee’s At Home at the Zoo. When will one of San Diego’s enterprising theater company’s decide to stage this new incarnation of The Zoo Story?