Everyone’s having a blast at 15-year-old Abigail’s party, rock music blaring and the crowd brimming with youthful promise and a sense of fun. At least, it sounds like fun, as the music drifts into a neighboring home, where an older, less promise-filled group is having an excruciatingly uncomfortable cocktail party. 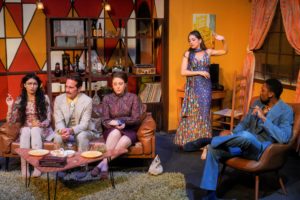 Beverly has invited the new couple on their London block, as well as Abigail’s mum. Oh, and Beverly’s husband, Laurence, is there, too. More’s the pity, in Beverly’s mind, since Laurence is a bore whom, she quips to their guests, she wouldn’t have married if they’d lived together first. But it’s 1977, and they didn’t—and Beverly’s outsized personality, which she clearly feels deserves a bigger stage, is limited to vamping and relentless inane chatter in a suburban living room.

What a room it is! It’s rendered (by Tony Cucuzzella) in all its tacky 1970s glory—diamond-patterned wallpaper in mustard and burgundy—in “Abigail’s Party,” presented by Backyard Renaissance Theatre Company at the Tenth Avenue Arts Center. Mike Leigh’s play, directed by Rosina Reynolds, opened on Saturday.

Leigh, the British auteur of films including “Secrets & Lies” and “Vera Drake,” is known for developing characters and dialogue via a lengthy process of improvisation with the actors. That’s how he created “Abigail’s Party,” which began as a stage play and then was filmed, and the characters are so thick, there’s an uneasy sense of clever theater people mocking the dull suburban life they’ve escaped.

Still, the play isn’t just wickedly funny, it’s riveting. The casual drinks party bristles with underlying antagonisms, conveyed by a superb ensemble … and when is something going to detonate?

Jessica John’s Beverly is a one-woman incendiary device. In a deliciously physical performance, John opens the play by playing “Love to Love You, Baby” and turning party preparations—putting out hors d’oeuvres, pouring the first of many drinks—into a sinuous dance. (John may be part-panther.) As she sneers at Laurence, blatantly flirts with the new neighbor, Tony, and insists on telling everyone what she knows they want, I got the urge to run up and smack her. 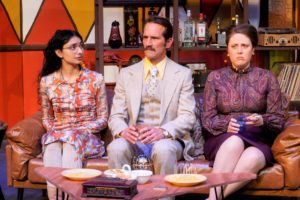 As Laurence, Francis Gercke seethes. We see him on the phone, obsequious with a real estate client, and wonder how much rage he’s swallowed, and what’s going to happen when it erupts.

New neighbors Angela and Tony have been married just a few years, but chirpy Angela (brightly played by Liliana Talwatte) might get on anyone’s nerves, and Tony (given a smoldering sullenness by Carter Piggee) cringes whenever she speaks. At one point, Angela cheerily mentions that he’s threatened to seal her mouth with sellotape.

Sue, Abigail’s mother, is divorced—a subject that Beverly and Angela have no reservations about exploring. As they ply her with personal questions, and Beverly keeps plying her with unwanted drinks, Michelle Marie Trester makes Sue’s unease palpable, her performance in its held-in way is as physical as John’s vamping.

Of course, in a Mike Leigh play, class is part of the underlying tension. Sue, whose ex is an architect, seems up the social scale from Beverly, who—judging from the lipstick advice she gives Angela—once worked at a cosmetics counter. Laurence aspires to higher status, pointing out the van Gogh print on the wall (exaggeratedly coughing out the Dutch pronunciation) and stopping Beverly’s pop record to put on Beethoven.

When the explosion happens, it’s shocking and very real, an indelible moment of theater. 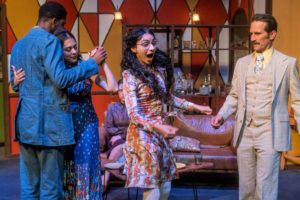 Reynolds’ production is rich in subtext, eloquent body language telegraphing the simmering tension. However, some of the opening night performances felt like they needed to be dialed back a notch. John was over-the-top coquettish, Gercke too tightly wound, and Talwatte so girlish she might have wandered in from the teenagers’ party. It will be interesting to see what shifts as they settle into their roles and really feel at home on Cucuzzella’s spot-on set.