It is said that on his deathbed, Beethoven gestured to a nearby volume of Handel’s works and said, “There is the truth.” That the music of George Frederic Handel moves listeners in a deep and compelling fashion—whether they are the proverbial man on the street or the most sophisticated composer—is a highly defensible position. 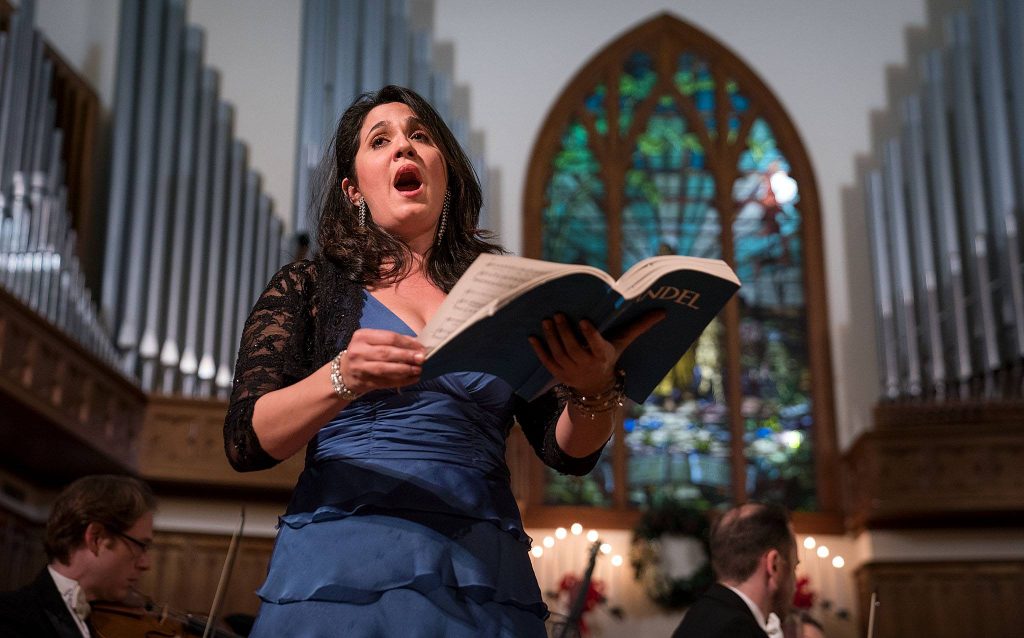 But it has been a long and winding road to return to a reasonable semblance of Handel’s music in a form he would immediately recognize. Here in San Diego County, for 15 robust seasons Ruben Valenzuela’s Bach Collegium San Diego has been the leading light of historically informed performance at an internationally recognized standard, and the Collegium’s annual Messiah performance has been its crown jewel.

I attended Tuesday’s (December 19) Bach Collegium Messiah performance at San Diego’s First Presbyterian Church, my fifth Messiah under Valenzuela’s direction. The reason I keep coming back is simple: he makes this 18th-century oratorio spring to life with a vivid emotional reality that equals the passion of Puccini’s best operas on a good night. For Valenzuela, period practice is not an end, but rather the means to intense, irresistible communication.

In this Bach Collegium performance, that tired maxim “less is more” could not have been more wholly vindicated: a chorus of 17 voices—including the six vocal soloists—and a dozen strings augmented by trumpets, timpani, and continuo instruments. In the oratorio’s grand chorus movements, Valenzuela kept the quiet sections tautly subdued and expectant, so that the fortes burst forth in fiery declamation that resounded through the capacious sanctuary. The strength of Valenzuela’s choir resides in the fact that every singer is a soloist, but solo voices selected to complement the other voices in each section and provide a brilliant yet unified ensemble.

I have never heard the aria “Rejoice greatly, O daughter of Zion,” sung at the exuberant tempo soprano Melanie Russell chose, yet her cascading roulades of sixteenth notes were more accurately placed than those of most sopranos who essay this aria at a slower tempo, and her effusive emotional communication was even more impressive than her crystalline clarity. The radiant shimmer of her vocal line imbued the final aria “If God be for us, who can be against us?” with unwavering spiritual assurance, the conclusive benediction to tenor Derek Chester’s heart-rending promise in his persuasive opening recitative “Comfort ye my people.” In his poised, buoyant ensuing aria “Ev’ry valley shall be exalted,” he bravely set the evening’s standard of brilliant ornamentation that enriches the meaning of the text rather than merely decorating the vocal line. That several singers came close to his example made for a most rewarding evening of vocal opulence.

Baritone Mischa Bouvier depicted Handel’s evocation of spiritual darkness in “The people that walked in darkness” and its recitative with the strength and infinite detail of a Rembrandt oil painting. And in a wonderful coup de théâtre, Josh Cohen ascended the First Presbyterian pulpit to sound the scintillating trumpet obbligato directly above Bouvier’s head as he unleashed his exhilarating “The Trumpet Shall Sound, and the dead shall be raised.” For those who naively think the valve trumpet universally found in modern orchestras is an unimpeachable improvement over the natural trumpet, they surely have not heard a virtuoso as fleet and deft as Cohen match the baritone’s elegant phrasing with such liquid symmetry.

A lighter but surprisingly warm soprano, Clara Rottsolk floated agile crescendos in her aria “I know that my Redeemer liveth,” giving it a persuasive simplicity missed by those sopranos who pump it up with stentorian conviction. Her caressing vocal touch proved equally winning in the duet with mezzo-soprano Lexa Ferrill “He shall feed His flock like a shepherd.” Ferrill’s lithe mezzo accounted for every note of her aria “But who may abide the day of His coming?” although her iterations of “a refiner’s fire” were less than white hot.

My reservations about countertenor Jay Carter’s contributions have less to do with his vocal performance—his light, highly flexible and clearly focused instrument communicated directly his aria “O Thou that tellest good tidings to Zion”—than with his lifeless stage presence. When he sang the aria “He was despised and rejected,” his stolid demeanor compromised the brutality of the text.

The return of Concertmaster Adam LaMotte ensured the sparkling ensemble unity of the Bach Collegium strings, and, as always, the immaculate continuo realizations on harpsichord and chamber organ by the Bach Collegium’s Associate Director Michael Sponseller gave each movement its just foundation and color. John Lenti’s delightfully assertive theorbo figurations greatly enriched the continuo texture, and the few times that the theorbo substituted for the harpsichord or organ, the effect proved electric.

Most choristers would agree that Valenzuela’s tempos for the oratorio’s many choruses tend to be faster than most directors dare attempt, but I never felt that any chorus was actually rushed. When the Bach Collegium chorus described the deserting sheep in “All we like sheep have gone astray,” the listener could not help but imagine a stampede of those fickle animals! And although Handel and his librettist avoided the gory details found in most German Passions of this period, Valenzuela colored the chorus “He trusted in God” with the cruel scorn of an unruly crowd equal to that expressed by the jeering crowds in J. S. Bach’s great Passions. Valenzuela’s insistent but judicious pacing of the entire oratorio consistently developed both the librettist Charles Jennens’ theological plan and the composer’s musical architecture.

It was rewarding to see the audience fill the large, stately First Presbyterian sanctuary, especially since the Collegium’s first venture at this venue in 2013 drew such a modest assemblage. The Bach Collegium must be doing something right!

The Bach Collegium San Diego performed a complete version of George Frideric Handel’s Messiah at La Jolla’s St. James by-the-Sea Episcopal Church on December 18, 2017; at the First Presbyterian Church of San Diego on December 19, 2017, and at Cardiff’s Sts. Constantine and Helen Greek Orthodox Church on December 20, 2017. The December 19th performance was attended for this review.