Ruben Valenzuela and his Bach Collegium San Diego scaled that Mt. Everest of choral works Friday (May 13), giving Claudio Monteverdi’s 1610 Vespers a thrilling, masterful performance. With a mere 26 voices and a modest cadre of period instruments, Valenzuela’s crew filled the resonant sanctuary of St. Andrew’s-by-the-Sea Episcopal church in Pacific Beach with such a tsunami of vibrant choral sound that if you closed your eyes, you might think your were hearing a massive festival chorus in some vast European cathedral. 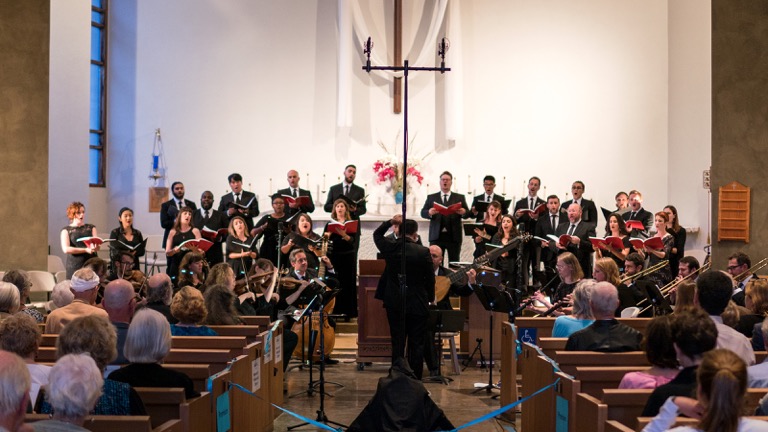 Size matters, of course, but for this seminal early Baroque work, style is of even greater importance, and an acute sense of period style is Valenzuela’s calling card. What makes the Bach Collegium so persuasive, however, is the assured prowess with which it presents an early 17th-century masterwork, as unself-conscious as a civic chorus presents, say, an Elgar oratorio or a major opera company presents Puccini.

From the opening movement’s full-throated repetitions of that same gleaming major triad pumped up with snarling period brass choir steroids (ably supplied by the cornetti and sackbuts of Tesserae Brass), the full house at St. Andrew’s tasted the splendor of Monteverdi’s harmonic revolution, an innovative musical approach that laid the foundations for the choral works of Handel and J.S. Bach that our western musical tradition rightly prizes. But this Bach Collegium performance demonstrated beyond any cavil that while Monteverdi’s approach was revolutionary in 1610, it was already amazingly complete and immensely satisfying in its unprecedented glory.

Sonic glory defines the Bach Collegium chorus, a mere 13 singers, but because each one is an accomplished soloist, they combine to produce fiery fortes and simmering soft sounds. Unlike the typical oratorio society performance pattern where soloists sit in front of a massed choir and sing only their solos and ensembles, Valenzuela’s soloists comprise the chorus and color it magnificently.

For this performance, the Bach Collegium chorus was augmented by another 13 voices selected from the San Diego State University Chamber Choir, voices that joined the Collegium chorus only in the more climactic sections of the Vespers, where these singers added breadth to the choral sound and depth to its opulent texture. So when, for example, Psalm 147 admonishes the faithful to the praise the Divine Majesty, these combined voices created a magnificently turbulent choral tapestry, as they did in Psalm 126, reminding the faithful the vanity of labor without Divine support.

Because the 1610 Vespers encompasses ten Psalms and other Biblical songs, as well as two Marian hymns and the Magnificat, Monteverdi created variety with various solos, duets and quartets. Among these soloists, soprano Molly Quinn and tenor Derek Chester stood out not only because of their vocal strength, but their virtuoso navigation of brilliant fioritura and period ornamentation.

Chester’s bright tenor soared through the explosive declamation of the “Nigra sum” with breathtaking ease, yet when paired with tenor Scott Mello in “Duo seraphim,” he floated limpid, legato phrases with equal finesse. While these two tenors could not have sounded more seraphic together, they were joined at the climax of the duet by tenor Eric Gustavson—singing from the organ gallery in the back of the church—creating a sumptuous surround sound. Did Monteverdi prefigure not only the oratorios of Handel but also the Three Tenor phenomenon from the late 20th century?

The gleaming clarity at the top of Quinn’s dramatic soprano served well both text and music of “Pulchra es” (“You are beautiful”), and the ecstatic urgency she brought to this movement reminded us that Monteverdi had birthed the first opera, Orfeo, only two years prior to publishing his Vespers. Kyle Ferrill used his darkly hued baritone to growl out the “Et misericordia eius” of the Magnificat with hearty, well-focused assistance from fellow baritones Patrick Walders and Jeff Fields.

Sopranos Stefanie Moore, Melanie Russell, and Anne-Marie Dicce added their vocal allure and elegant phrasing to duets and trios throughout the Vespers, and all the Collegium sopranos singing together from back of the church in the “Gloria patri” towards the close of the Magnificat could not have sounded more radiant.

With a short intermission, the 1610 Vespers lasted two hours and forty minutes. To his great credit, conductor and Bach Collegium Music Director Ruben Valenzuela kept the pulse lively and the dramatic movement of the entire work unfailingly on track. By observing the composer’s frequent dynamic contrasts and moving his voices into varying configurations across the wide church chancel and even into other parts of the room, Vespers never felt like a long work. I wish I could say the same about maestro Jahja Ling’s traversal of much shorter (in comparison to this work) Mahler symphonies!

Kudos to organist Michael Sponseller, whose crisp, attentive execution of the unrelenting continuo function at the keyboard proved the solid rock upon which the whole musical edifice was built, and the splendid continuo work of theorbo player Simon Martyn-Ellis enlivened the instrumental texture at every turn. Violinists Susan Feldman and Janet Strauss turned out admirable virtuoso duets in several of the ritornello sections, and cornettist Alexandra Opsahl showed her virtuoso technique to great advantage in the “Sonata sopra Sancta Maria.” All five members of the Los Angeles based Tesserae Brass proved mighty yet nimble throughout.

Like J. S. Bach’s great work The Art of Fugue, we are not certain why Monteverdi published the 1610 Vespers. The latter provides far too much music for a single vesper service (had Valenzuela performed the OTHER Magnificat which is part of the publication, we might have been stuck in Pacific Beach until the bars closed!).

But as performed with such élan and prowess, huge chunks of Monteverdi’s Vespers in any configuration make a most welcome concert.