Contrary to popular assumption, there is no standard version of Handel’s best known oratorio Messiah. After the composer first performed the work in 1742 in a Dublin music hall, throughout his life he continued to alter it every time he presented the work, composing new arias for different vocal soloists or revising portions to suit the circumstances of a given performance.

After Handel’s demise, both C.P.E. Bach and Mozart made arrangements of the oratorio with a German translation of the text, and Mozart significantly expanded Handel’s orchestration to suit the Viennese musical tastes at the end of the 18th century.

In this spirit of continuous transformation, two years ago the Bach Collegium San Diego commissioned Mario Montenegro to make a Spanish language translation of the entire Messiah, and under Artistic Director Ruben Valenzuela’s direction, the Bach Collegium performed this new translation—El Mesías, Handel’s Messiah for a New World—in three different venues in San Diego, CA,  and Tijuana, B.C., March 18 to 20. 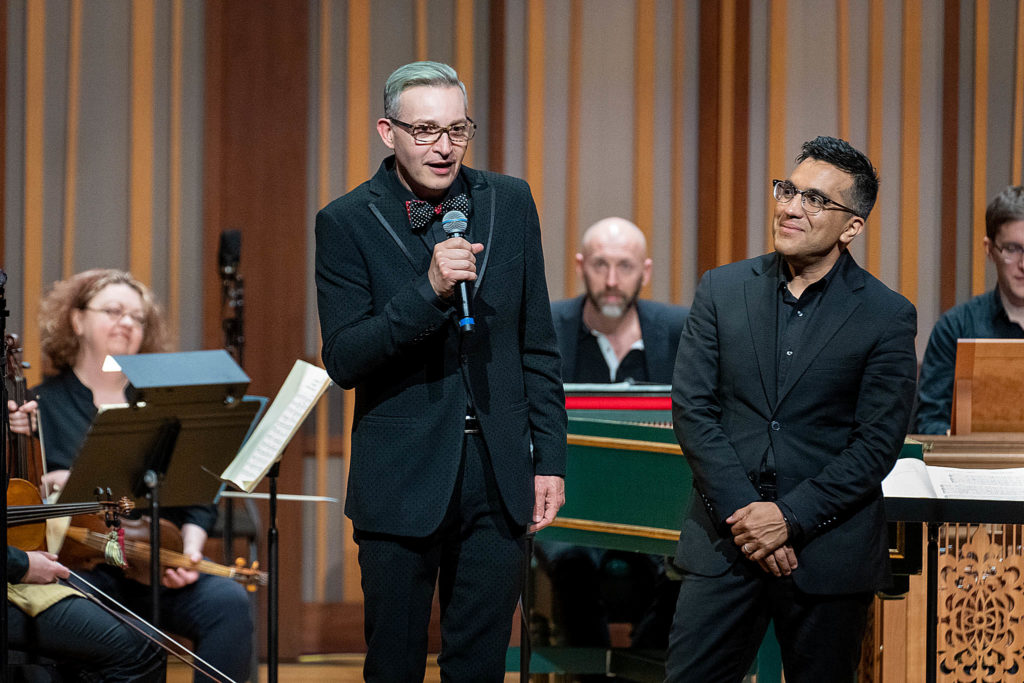 I was able to attend Saturday’s (March 19) performance in the Baker-Baum Concert Hall of The Conrad in La Jolla, and from this first impression of the new translation, I would say this project is a success. Of course, I have heard the Bach Collegium perform Messiah in English half a dozen times over the years, not to mention countless other church and civic presentations of the oratorio in the original language, so comparing the two texts is hardly an even, one-to-one comparison.

Nevertheless, the lyrical flow of sung Spanish and its pure vowels clearly enriched the choral sonority and gave many of the solo lines a more supple character than the original English text. For example, in an early chorus, the words from the Prophet Isaiah, “Principe, Salvador, Immenso Dios, el Sempiterno Padre, Señor de Paz,” shimmered with a brilliance that eludes the English text with its covered vowels and crunchy consonants, “Wonderful, Counsellor, the Mighty God, the Everlasting Father, the Prince of Peace.”

When mezzo-soprano Cecelia Duarte sang her agitated aria about “the refiner’s fire,” her Spanish text “un crisol de fuego” fit the accent of Handel’s rhythmic patterns precisely, and she didn’t have to finesse those hard to sing English diphthongs. Montenegro successfully found many Spanish translations that deftly paralleled the cadence of Charles Jennens’ original English text: tenor Aaron Sheehan reassured the audience that “Cada valle será elevado”—“Ev’ry valley shall be exalted”—and bass Mischa Bouvier valiantly proclaimed “Trompeta anunciad que la muerte acabó”—“The trumpet shall sound, and the dead shall be raised.” Only a few times did the Spanish strike out. Although soprano Estelí Gomez bravely tried to get Handel’s explosive accent in the figure that opens her aria “Cantad alegres, Oh hijas de Zión”—“Rejoice greatly, O daughter of Zion”—the verb cantad simply did not have the snap of the English rejoice.

Because I had another concert to review at The Conrad on Sunday, March 20, I could not attend the Bach Collegium’s final performance of El Mesías at Cecut in Tijuana, Baja California, but I covet the experience observing a Mexican audience’s reaction to this Spanish language Messiah. For the record, Saturday’s La Jolla audience gave rapturous approval to the Bach Collegium’s performance of El Mesías.

Valenzuela’s swiftly-paced but elegantly detailed account of Handel’s Messiah persuaded me the first time I heard him conduct the oratorio, and his interpretation continues to satisfy at every level. From the first strains of the Overture, Valenzuela established a dramatic tension filled with expectation that never faded, even in the work’s most reflective lyrical moments. His 17-member chorus of professional singers displayed a wider range of vocal colors and dynamic levels than a community chorus of 100, and they tossed off the athletic counterpoint of the chorus “Mas el Señor nos congregó”—“All we like sheep have gone astray”—with breath-taking ease and bracing clarity.

His vocal soloists graced their arias with operatic verve, inasmuch as opera was the composer’s first love and primary means of establishing his reputation in London’s musical society. Bass Mischa Bouvier pumped up the dramatic suspense in his recitative preceding “Trompeta anunciad,” then launched into a thrilling tour de force duel with natural trumpet virtuoso Josh Cohen, gloriously encouraged by Valenzuela and the strings. Sending out polished arcs of molten brass—and playing from memory—Cohen stood at the front of stage right while Bouvier declaimed his bold, burnished themes opposite him stage left. If the archangel Gabriel indeed sounds his trumpet on the biblical Day of judgement, it should sound this good.

In her aria “Mas ¿Quién resistir podrá su llegada?”—“But who may abide the day of his coming?”—mezzo-soprano Cecelia Duarte’s suave lines and compelling supplication contrasted dramatically with her raging admonition “Porque es él un crisol de fuego”—“For He is like a refiner’s fire.” Countertenor Jay Carter navigated adroitly the urgent traceries of “Oh tú que anuncia las nuevas de Zion”—“”O thou that tellest good tidings to Zion”—and he engaged in an elegantly balanced duet with tenor Aaron Sheehan, “¡Morir,no!”—“O death, where is thy sting?” I admired Sheehan’s lustrous roulades and concluding cadenza in his aria “Cada valle”—“Ev’ry valley.”

In “Yo sé que mi redentor vive”—“I know that my Redeemer liveth”—soprano Nell Snaidas sang with tender confidence, and she generously ornamented the da capo repeat of this familiar aria. Handel’s final aria prior to the closing chorus provides a sermon-like benediction, “Si Dios nos protege”—“If God be for us, who can be against us?” With a bold obbligato from Concertmaster Martin Davids, Estelí Gomez’s gleaming soprano and dulcet phrasing delivered the message with compassionate confidence.

Valenzuela’s period orchestra of 17 players—strings, trumpets, timpani, and harpsichord and organ—played with vigorous and estimable ensemble. Associate Music Director Michael Sponseller on harpsichord and organist Jacob Street provided a virtual master class on how to create consistently inventive continuo support throughout the oratorio. I did miss in this year’s orchestra the unique timbre of the theorbo in the continuo group.