The Bach Collegium San Diego’s scintillating performance of G. F. Handel’s Acis and Galatea Friday (October 20) proved how fortunate we are that Artistic Director Ruben Valenzuela does not restrict the company’s repertory to its namesake composer. As profound as the sacred works of J. S. Bach may be, even the devout can tire of the intellectual confinement of orthodox Lutheran theology, which Bach’s cantatas and motets unstintingly expound. 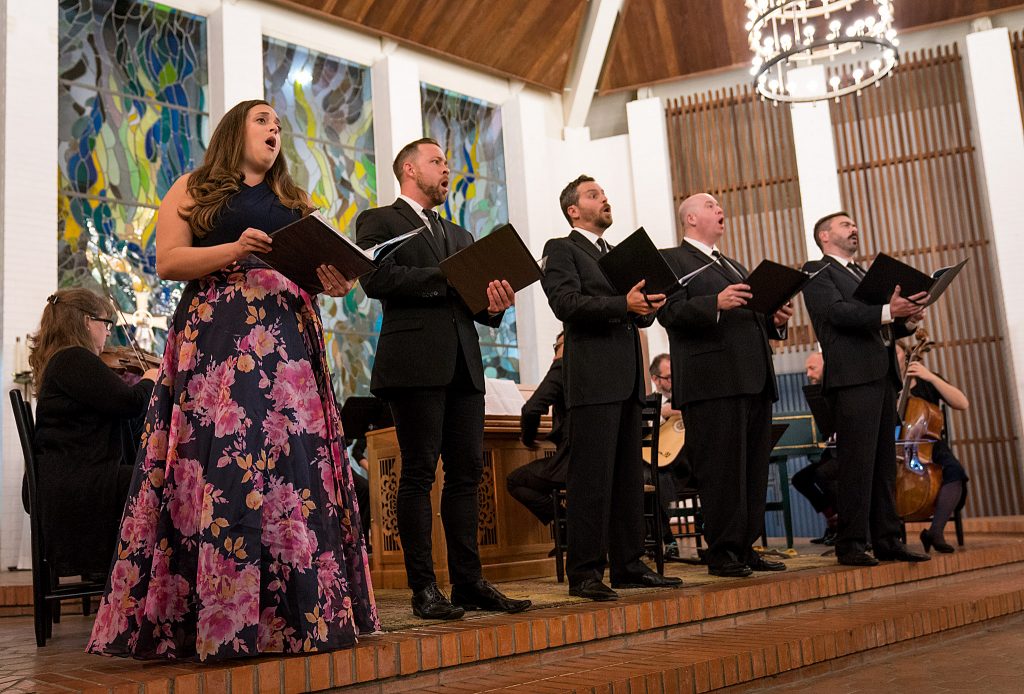 Acis and Galatea, Handel’s one act English language pastoral opera from 1718, is a highly unusual work that over the course of his career the composer continued to revise and expand, even adding Italian language movements form his earlier cantatas. Not surprisingly, writers and promoters have always been uncertain how to describe it, resorting to serenata, masque, “little opera” (the composer’s own slight penned in a letter), entertainment, and (wrongly) oratorio.

Disputation aside, this Bach Collegium production demonstrated beyond cavil that this charming dramatic work based on events from classic Greek mythology is indeed highly entertaining, replete with some of Handel’s most astonishing and rewarding vocal and instrumental inspiration. To the best of our knowledge, Valenzuela’s concert version approach—employing the requisite instrumental ensemble and five accomplished singers in dual roles of soloist and chorus—parallels Handel’s first performance in 1718 outside of London.

About the plot of Acis and Galatea there is little complexity, especially recalling the bromide that describes most opera plots as an ill-intentioned baritone coming between a soprano and a tenor. Although the semi-divine nymph Galatea loves the shepherd Acis, the evil giant Polyphemus (son of Poseidon) pursues Galatea, and when he is spurned, the giant kills Acis. Relying on her divine powers, Galatea turns her deceased lover into a fountain that will delight her for eternity. Those Greeks knew how to live!

Soprano Teresa Wakim proved a resplendent Galatea, a bright, supple voice that securely crowned the four male voices singing below her. A subtle, charming vibrato convinced us of her ardor, and the warmth of her sound was not compromised by the wide emotional demands of her role. As her lover Acis, Derek Chester’s nimble tenor revealed a certain declamatory fire, and the two singers’ “Happy we!” proved that their ample vocal agility increased significantly in the dueling roulades of that exuberant duet. Could anyone ask for more from Mischa Bouvier as Polyphemus? His robust, muscular, yet remarkably defined baritone could shift from fervent wooing to fearsome threat in a nanosecond. And he conveyed an apt menacing undertone to his virtuoso aria “O ruddier than the cherry,” an aspect rarely encountered when this solo is excerpted for a vocal recital.

As Damon, friend and guide to Acis, John Russell’s luxuriant, ingratiating tenor navigated the part’s fioritura with authority and sensitive dynamic shadings. The third tenor, Matthew Tresler as another advisor to Acis, Coridon, used his metling legato line to add luster and sensitivity to his aria “Would you gain the tender creature.”

This Handel performance was given by the Bach Collegium San Diego at All Souls’ Episcopal Church, 1475 Catalina Blvd., San Diego, on October 20, 2017. The work was repeated on October 21 at Sts. Constantine and Helen Greek Orthodox Church in Cardiff, CA.