The revival of Europe’s interest in the music of J. S. Bach was launched in 1829 in Berlin by a performance of the composer’s monumental Passion According to St. Matthew under the baton of Felix Mendelssohn. In comparison, the revival of interest in the music of English composer Henry Purcell in North America started in the 1950s with church musicians who liked to play Purcell’s Trumpet Voluntary at weddings as a processional.

Mendelssohn’s rediscovery of Bach changed the course of western music, and today anyone who is even faintly aware of classical music knows that its cornerstone “Three B’s” are Bach, Beethoven and Brahms. Purcell has not been so fortunate, in part because his popular Trumpet Voluntary turned out to be written by his contemporary Jeremiah Clark, although Purcell was not responsible for that mistaken identity. But there are no “Three P’s” of western music. I could live with Purcell, Paganini, and Prokofiev, for example, but don’t hold your breath for that eventuality. 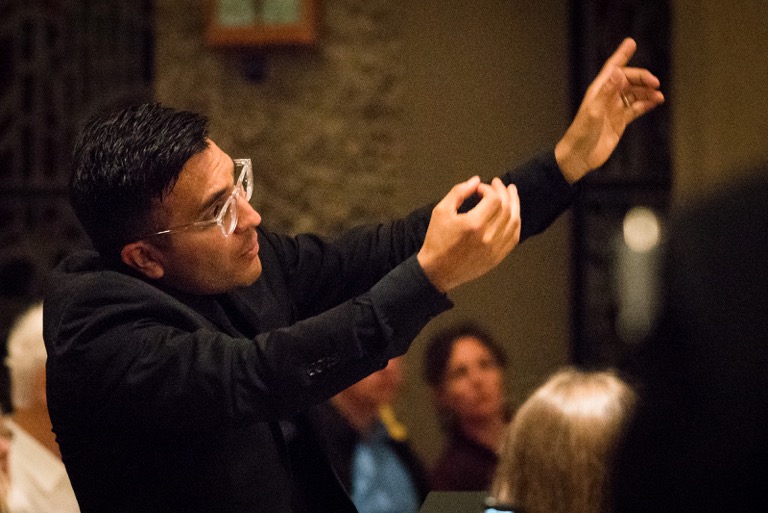 Informed performances of music by Henry Purcell in San Diego County are rare, although Peter Kozma’s Opera NEO presented Purcell’s opera The Fairy-Queen in its 2016 festival with Nicholas Kramer leading a period ensemble. Ruben Valenzuela, Artistic Director of the Bach Collegium San Diego, has decided to do his part to bring a wider selection Purcell’s music to San Diego with Friday’s (May 11) substantial all-Purcell concert presented by the Bach Collegium at All Souls’ Episcopal Church in Point Loma. And Valenzuela has slated another all-Purcell extravaganza for the Bach Collegium’s 2018-19 season.

Given the Bach Collegium’s stellar track record, it is no surprise that Valenzuela made a persuasive case for Purcell’s music, employing his usual top-drawer period instrumentalists, a roster of four accomplished vocal soloists, and his impeccably trained chorus. He gave a clear sense of Purcell’s musical scope, programming portions of two festive Odes (secular cantatas), instrumental selections from The Fairy-Queen, solo songs, and sacred anthems.

“Welcome to All the Pleasures,” Purcell’s Ode to St, Cecilia—the patron saint of music and musicians—written in 1683, impressed with its exuberant spirit, bristling instrumental ritornellos, and its elaborate trio for three male singers whose vibrant, colorful vocal ensemble propelled and unified the cantata. Countertenor Jay Carter excelled projecting opulent legato lines, while Enrico Lagasca’s bold bass-baritone impressed with unusual brilliance and power even in his lowest register, and tenor Aaron Sheehan negotiated daunting fioritura in his bright upper register. Given the distinctive individual character of each soloist, they came together as a beautifully balanced ensemble.

Two anthems from Purcell’s 1695 Music for the Funeral of Queen Mary revealed the composer’s skill and gravitas in the realm of sacred music. The stately “Man that is Born of a Woman” celebrated earthly transience with somber progressions in the lowest choral registers, which Venezuela’s basses executed with stark but compelling dignity. The low voices also prevailed in “In the Midst of Life,” where the composer’s daring chromatic harmonies developed the pathos of the text. This probing anthem called to mind Martin Luther’s 1524 chorale on a similar text “Mitten wir im Leben sind,” as well as the darker motets found in Heinrich Schütz’s Musikalisches Exequien from the 1630s.

A remarkable song for soprano and continuo, “An Evening Hymn,” gave Clara Rottsolk the opportunity to apply her radiant voice to the composer’s felicitous melodic turns and ravishing melismas, shading every phrase with eloquent phrasing that dared the listener to contemplate anything but her ecstatic utterance of the moment. Cellist Heather Vorwerck and theorbo virtuoso Richard Savino provided Rottsolk elegant and aptly understated support.

From The Fairy-Queen, Valenzuela extracted an attractive suite of instrumental movements, mainly quick, effervescent dances, for his assembled musicians. The Prelude revealed a typical 17th-century French Overture—Handel opens Messiah with a typical two-movement French Overture—and the closing Chaconne showed the composer’s clever melodic invention executed over a stately ground. For this suite the orchestra stood, giving this ensemble a surprising increase of dynamic power and color and allowing us to hear more clearly bassoonist Nathan Helgeson, seated behind the cellists. They cannot stand and play, of course, so when Helgeson stood, his line finally came out to balance the two fluent oboists, Lot Demeyer and Kathryn Montoya, who played from a raised platform on the opposite side of the orchestra.

The text of “Now Does the Glorious Day Appear,” a birthday ode for Queen Mary written in 1689, indulges in copious royal flattery, the sort of hyperbolic praise that a certain prominent American elected official craves, although the line that lauds the monarch’s reign “with such sweetness and such justice” would lack congruence in his case.

Valenzuela conducted this Birthday Ode with his customary vigor, constrained only by an unfailing rhythmic precision animated by his energetic upbeats. We are fortunate that the musicians he regularly assembles possess the technique and acuity to carry out his intentions with such ebullience and accuracy.

I left this concert with an expanded appreciation of the Purcell’s musical scope and depth. Unchanged, however, is my larger reservation about his inadequate skill at musical structure: his short, snappy phrases seldom develop or extend; his modulation is minimal, and his sole model for an extended movement is resorting to a ground bass. And when Purcell doesn’t know what to do next, he throws in another ritornello. Had I been in possession of state secrets, I believe I would have divulged them readily on Friday upon threat from maestro Valenzuela to perform yet another Purcell ritornello.

This concert was presented by the Bach Collegium San Diego on May 11, 2018, at All Souls’ Episcopal Church, 1475 Catalina Blvd., San Diego, CA. It will be repeated on May 12, 2018, at Sts. Constantine and Helen Greek Orthodox Church in Cardiff, CA.