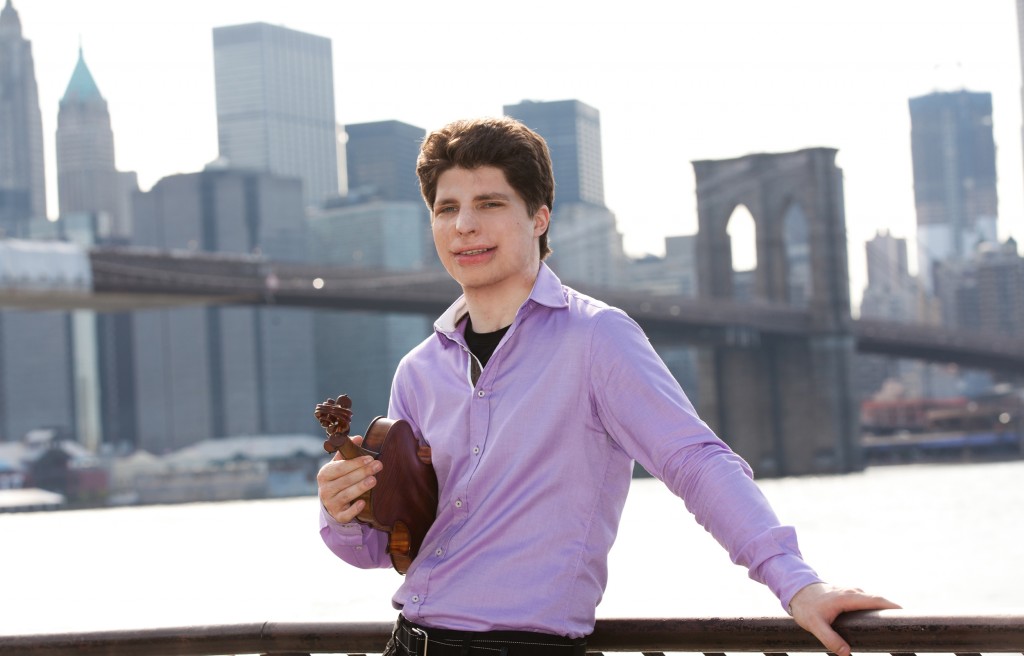 But from his intense and soulful extended incantation that wound through the Concerto’s opening Nocturne to his blazing cadenza at the close of the Passacaglia, Hadelich won the audience’s rapt attention and lavish approval. Written in 1947 for the great violinist David Oistrakh, this Violin Concerto is one of Shostakovich’s most inventive orchestral works, requiring a soloist with impeccable virtuoso technique, a wide range of instrumental colors, and the ability to engage deftly with other soloists from within the orchestra. Hadelich possesses all of these virtues and more.

Not that Hadelich’s brilliant playing came as any surprise to San Diegans. A longstanding favorite guest soloist here, Hadelich has frequently appeared at La Jolla SummerFest, and with the San Diego Symphony he opened its 2013 season playing the Samuel Barber Violin Concerto, which he performed with the orchestra on their Asian tour later that fall. He has some history with this orchestra, and the chemistry between orchestra and soloist could not have been more favorable.

Guest conductor Markus Stenz and the orchestra pulled out all the stops to bring the Concerto into its full glory. Stenz skillfully crafted the luminous textures of the mysterious Nocturne, especially when Hadelich floated his haunting, gossamer high melodies, yet he happily unleashed the amusing woodwind clatter that opened the almost bumptious Scherzo. Orchestra and soloist found both depth and grandeur in the mighty Passacaglia, and Stenz maintained its precise, majestic rhythmic definition throughout.

Among the several enchanting duos, allow me to praise English Horn player Andrea Overturf’s gorgeous counterpoint with Hadelich in the Passacaglia, a charming duet between Hadelich and the celesta in the opening movement, and a jaunty engagement with Principal Clarinet Sheryl Renk that sparked the exhilarating finale, whose wild ride sweeps all the performers into the work’s flashy conclusion.

After the Violin Concerto’s glorious turmoil, Hadelich returned to play J. S. Bach’s Andante from Sonata No. 2 for Solo Violin in A Minor as his encore. As he worked his way with exquisite deliberation through Bach’s harmonic and melodic labyrinths, Copley Symphony Hall became still and focused to a degree rarely experienced. The last time I recall such holy quiet, Gil Shaham was playing a solo by J. S. Bach on the Copley stage—Bach well played has a way of doing that.

Stenz devoted the rest of his program to Beethoven, the Lenore Overture No. 2 and the Symphony No. 5. The Second Lenore Overture (written for Beethoven’s opera that he eventually titled Fidelio—don’t ask) is not that frequently programmed, but it does require lofty off-stage trumpet calls, which Principal Trumpet Micah Wilkinson played with finesse and his customary supple tone.

From his players Stenz elicited a wide range of dynamic contrasts, which he used to clarify the Overture’s structure and underscore its dramatic movement. This virtue worked particularly well in the Fifth Symphony, which, under Stenz’s precise direction, bloomed with greater clarity and focus than most accounts provide. His tempos tended to the swift side, although the final Allegro unfolded with magnificent, unforced ebullience.

I hesitate to characterize Stenz’s idiosyncratic style of conducting, because the orchestra responded to him with some of their best playing of the current season. Let me simply say the if Riccardo Muti’s reserved, understated conducting of the Chicago Symphony is at one end of the scale, Stenz’s approach would be found 180 degrees in the opposite direction.

This concert by the San Diego Symphony was played on Friday, March 3, 2017, in the Jacobs Music Center’s Copley Symphony Hall in downtown San Diego. The program was repeated on March 4 & 5, 2017, in the same venue.