Artworks influenced by medical research and inspired by a concern for our water supply can either quench or parch a viewer’s intellectual thirst. In her current exhibition What Comes to Mind: Nature-Human Nature and Visual Translation at La Jolla’s Athenaeum Music & Arts Library, artist Joyce Cutler-Shaw contends with disparate issues such as death, memory, and potable water. The works are also presented in a random, scattershot manner creating an exhibition that appears chaotic and lacking focus. 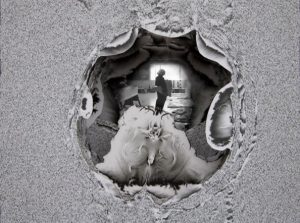 Cutler-Shaw has a long history of making artist books and since 1992 has been artist-in-residence at the University of California, San Diego’s School of Medicine. She uses her access to the School of Medicine to make drawings of their cadavers. Heavily interested in the human body, the artist even had a radiologist at New York University scan her own brain from different angles using magnetic resonance imaging (MRI).

This self-portrait is a triptych of three films of her MRI brain scans. Sitting on a shelf attached to the wall, each film is displayed in its own shaped frame illustrated with cranial imagery. The left MRI scan proceeds from the front to the back of her brain, the center film proceeds from the base of her brain to the top, and the right film of the triptych is a brain scan from the left side to the right side.

The triptych is a fascinating spectacle but viewing it is akin to watching a late 1960s Lava Lamp, which puts a viewer into a trance-like state. This artwork is simply a nice series of contextually framed, animated MRI scans and relies too heavily on the literal MRI technology itself. The hypnotic spectacle promotes pure thoughtless observation without imparting thoughtful contemplation.

As a book artist, Joyce Cutler-Shaw has created many works dealing with birds and has even created an entire typographic alphabet based on the shapes of bird bones resembling elegant Asian calligraphy. Graceful samples of her alphabet can be found in a bookcase of the Athenaeum’s north gallery. Also hiding in these bookcases is a tiny artist book by her with the title “New York Memories” (2007). The tiny fold-out book features multiple drawings of frontal portraits of a woman with the face in each replaced by a major iconic architectural landmark in New York City. Each head superimposed by a famous New York building symbolizes individual memories of the artist’s visit to the city.

Other artworks in her What Comes to Mind series incorporate the MRI scans together with both her previous bird inspired works and her tiny previously mentioned book. This fusion creates some of the most magically complex and fascinating objects in the exhibit. In a cabinet of drawers situated the middle of the main gallery can be found five small, engaging paper works. These five small works incorporate other ideas and images, too, such as famous drawings by Leonardo da Vinci.

Another fine work from the series is “What comes to Mind: Tunnel Book with Memory Pictures (NY Odyssey),” 2012. Mounted to the wall on a shelf within a cranial frame is a black and white film montage of Cutler-Shaw’s brain scans spliced together with still-images of dead pigeons sited in peculiar settings. One portion of the film features a photograph of a pigeon sprawled on the front desk of a hotel backed by the mail cubicles allotted to each hotel room. Other portions of the film feature a still-image of a dead pigeon spread out on top of a chicken wire cage as well as other odd pigeon images. The still-images of the dead pigeons edited together with splices of her progressing MRI scans creates a wonderfully satisfying artwork that becomes a surrealistic journey through the disquieting and unpredictable rambling mind.

As artist-in-residence at the School of Medicine, drawings from cadavers have evolved into a series called From the Anatomy Lesson. From these drawings the artist has created flat cutout reliefs made of several layers of overlapping, repeating imagery increasing in scale from front to back. In the work entitled “Limbs and Trunks,” the repeated images feature drawings of contorted forearms combined with drawings of tree limbs. Though, the dimensional composition of human limbs coupled with tree limbs is a very tired visual simile that becomes a sophomoric cliché.

Cutler-Shaw has also been making artworks addressing the shortage of the world’s shrinking potable water supply since the 1970s. New works addressing this subject are diorama-like boxes with little sliding doors that have photographs pasted onto their exteriors and within their interiors. On the wall mounted work entitled “At Elephant Butte: When the River Runs Dry” (2012), when the little doors of the box are shut, displays a riverbed seen through a thicket of shrubbery. When the doors of the box are opened, the interior shows a close-up view of the riverbed’s barely moist stones. Such simplistic diorama-like works have neither the pathos nor punch to provoke any change whatsoever. After viewing such works, it is little wonder the world still suffers from a shortage of safe drinking water.

This very fact itself says a lot about Joyce Cutler Shaw’s work. While capable of producing truly gripping artworks, too many of the works in this exhibition are mere politically correct and/or aesthetic exploitations of hot-button issues. This exhibit needed better editing or a more cohesive curatorial effort. Upon leaving the exhibition a viewer may be confounded and perplexed: while some of the works on display are complex and enthralling, some of her other artworks are such mediocre efforts they should be locked-up under guard in the artist’s studio to prevent them from escaping.