The sheer amount of music composed today is staggering—and that is probably a healthy sign. But what is excellent, rewarding, worth learning and given an attentive listening? Kate Hatmaker, Artistic Director of Art of Élan, has established an enviable record programming new music for this dauntless organization over the last eleven years. 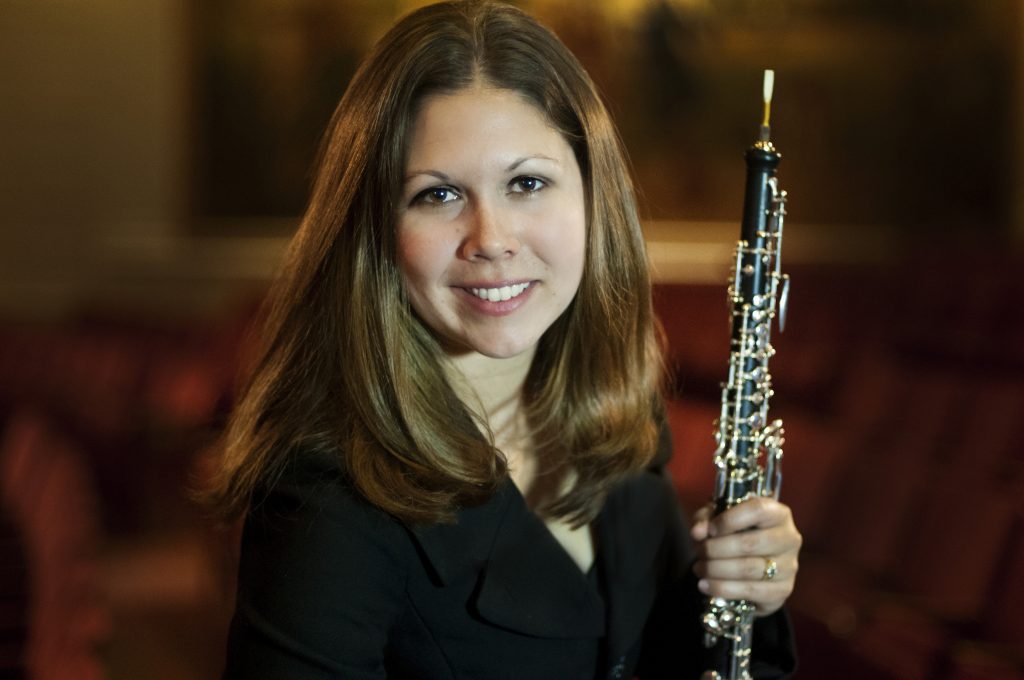 But I daresay she outdid herself Tuesday, November 6, in Art of Élan’s amazing concert in the atrium of the San Diego Museum of Art.

Hatmaker opened with a pair of Claudio Monteverdi madrigals turned out in impeccable style by singers from the Bach Collegium San Diego, accompanied by BCSD Music Director Ruben Valenzuela at the harpsichord and cellist Alex Greenbaum. Soprano Anne-Marie Dicce, tenor John Russell, and countertenor Bradley Sharpe stood out as they caressed the composer’s voluptuous melodies, tempered with dynamic nuances that gave this radical vocal music—in its time—such elan.

Jumping a few centuries ahead, violinist Hatmaker joined Greenbaum and Wesley and Hanah Precourt—violin and viola respectively—in an effervescent, judiciously balanced account of Schubert’s “Quartettsatz,” a work for string quartet that embodies all the virtues of that composer’s instrumental prowess in one blessedly compact movement.

With that bit of musical sorbet still melting in our mouths, that same ensemble offered its probing take on Rhiannon Giddens’ chilling yet exquisite piece “At the Purchaser’s Option.” At this year’s Carlsbad Music Festival I heard the Hausmann Quartet, for which Greenbaum is cellist, play Giddens’ work inspired by an historical footnote that caught this award-winning North Carolina composer’s attention: an early 19th-century advertisement for a young female slave and her 9-month old child who could also be acquired “at the purchaser’s option.” Repetition does not diminish the visceral irony of hearing the rustic twang of traditional music from the deep South narrating the barbaric practices that undergirded that region’s brutal history.

Although I know and have accompanied “Come Sunday” from Duke Ellington’s large sacred work Black, Brown, and Beige, I could not find its limpid melody in Jeff Scott’s  2005 “Homage to Duke” for five winds. Scott references “Come Sunday” in his program notes about his elegantly constructed short Ellington homage, but I did sense that the composer from Queens expanded Ellington’s rich chordal progressions in “Come Sunday” to launch this atmospheric evocation of 1940s American jazz sophistication.

Just when I thought Hatmaker’s charming mosaic was coming to a sweet close, the program’s final piece, David Bruce’s 2016 “The Consolation of Rain for Oboe, Cello, Harp, Percussion,” took over and swept me away. This expansive, five-movement suite invokes with a mere four virtuoso soloists the symphonic tone poem fused with an oboe concerto but distilled into a masterful crucible of chamber music. Like the image of ocean in Debussy’s “La Mer,” programmatic allusions to rain in Bruce’s piece quickly transform into a mysterious contemplation of the delicate yet wondrously complex sound collages that unfold instead.

San Diego Symphony Principal Oboe Sarah Skuster lavished her sonic elegance on everything from delightfully inventive rollicking themes in jaunty triple time to haunting, hushed whimpers. Bruce wrote his “Consolation” for an oboist whose skills he greatly admired, and Skuster met every challenge with bravura to spare. Percussion wizard Sean Dowgray and Symphony Principal Harpist Julie Smith Phillips wove together a wondrous tapestry of accompanying motifs that effectively merged the mellow warmth of the marimba with the precise attack of the harp. At other time these musicians expanded the oboe themes or playfully dueled together employing the piquant upper range of the harp and the delicate shimmer of the glockenspiel. Cellist Greenbaum spent much of his time uniting the more colorful timbres around him, but he unleashed occasional jazzy riffs that further enriched Bruce’s marvelous textures.

Bruce’s music here in San Diego has enjoyed notable welcome, not only his chamber music played by Art of Élan, but his substantial, winning “Night Parade” written for the San Diego Symphony for its tour of Asia in 2013 and a violin concerto “Fragile Light” for Gil Shaham premiered with the orchestra in 2014. But the level of invention and sophistication of his “Consolation of Rain” soared high above my fondest expectations. It is the “Quartet for the End of Time” for our era.

This concert was presented by Art of Élan at the San Diego Museum of Art on Tuesday, November 6, 2018. The organization’s next performance at this venue is slated for January 25, 2019.